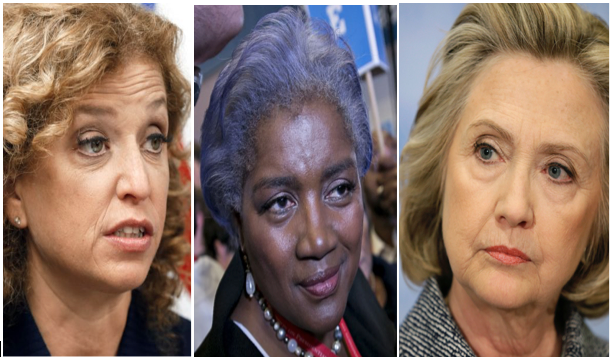 @THE GUSS REPORT-The axiomatic history of white men hashing out shady political deals in smoke-filled backrooms has come a long way, baby. On Friday, Donna Brazile, the former CNN commentator and interim chair of the Democratic National Committee, finally confessed to that which most already knew and that she spent the past half-year denying: rigging a March 2016 Democratic primary debate on CNN by funneling to the Hillary Clinton campaign at least one pre-screened audience question that she did not also provide to the Bernie Sanders campaign, which she had planned to do again in subsequent debates.

In a defensive, just-published essay she wrote for Time Magazine, Brazile said she would regret that decision for the rest of her life. But while she deserves credit for finally coming clean, she continues to blame the Russians for her own actions, and fell short of apologizing to Sanders and every registered voter who deserved the opportunity to hear him make his case for the presidency on a level playing field.

But the situation is actually worse than that.

On the literal eve of the DNC convention last July, Brazile was suddenly appointed to the interim DNC job when President Obama persuaded her predecessor, Florida Congresswoman Debbie Wasserman-Schultz, to step down from the role because Wikileaks had just released scores of internal DNC emails showing significant bias for Clinton and against Sanders -- including snarky comments about whether and how they should use Sanders’ Judaism, or perceived atheism, to sow distrust of him among Southern Baptists who, DNC officials figured, would trust Sanders if they felt he was Jewish, but not if they could be persuaded he was atheist.

Immediately upon her appointment, Brazile published an apology on behalf of the DNC (that was not signed by Wasserman-Schultz) which read, “On behalf of everyone at the DNC, we want to offer a deep and sincere apology to Senator Sanders, his supporters, and the entire Democratic Party for the inexcusable remarks made over email…. These comments do not reflect the values of the DNC or our steadfast commitment to neutrality during the nominating process. The DNC does not — and will not — tolerate disrespectful language exhibited toward our candidates.”

But at the same time Brazile was apologizing for DNC misconduct under Wasserman-Schultz, promising neutrality going forward, she knew that just a few months earlier, she committed similarly egregious acts prior to the March 6 CNN debate. The public didn’t find out about it until just a few days before the general election, when in late October Wikileaks dumped proof of it.

Right up until Election Day on November 8, Brazile refused to verify that the October Wikileaks emails were hers, even playing the victim card in a riveting live interview with then-Fox News host Megyn Kelly, with Brazile claiming that she is a persecuted Christian woman.

The DNC and Clinton campaign were perplexed and frightened throughout the election cycle by the organic enthusiasm that imbued Sanders’ entire run. It was completely unanticipated by them for a man from the state with the second lowest population, and who was portrayed by Larry David on Saturday Night Live as a lovable, impossibly honest, curmudgeon.

Clinton, for her part, also has yet to apologize for the misconduct of those on her campaign staff. Wasn’t the buck supposed to stop with her? What heroes they would all have been if they made it known to the public prior to the debates that they were given an unfair advantage!

About the same time as Brazile’s confession this past Friday, Clinton delivered a speech in Pennsylvania, hinting about returning to public life, jokingly saying, “it’s time to come out of the woods,” a reference to the numerous selfies taken by people encountering her on trail walks near her home in Chappaqua, N.Y. With the 2018 mid-terms not looking too rosy for the DNC, it will need all the help it can get gearing up for 2020. Clinton, Wasserman-Schultz and Brazile, women who didn’t just occupy, but owned, the smoke-filled backroom in 2016, would be wise to each offer a clear, concise and unequivocal two words to Sanders and every registered 2016 voter across all party lines: I apologize.

(Daniel Guss, MBA, is a member of the Los Angeles Press Club, and has contributed to CityWatch, KFI AM-640, Huffington Post, Los Angeles Times, Los Angeles Daily News, Los Angeles Magazine, Movieline Magazine, Emmy Magazine, Los Angeles Business Journal and elsewhere. Follow him on Twitter @TheGussReport. His opinions are his own and do not necessarily reflect the views of CityWatch.) Edited for CityWatch by Linda Abrams.