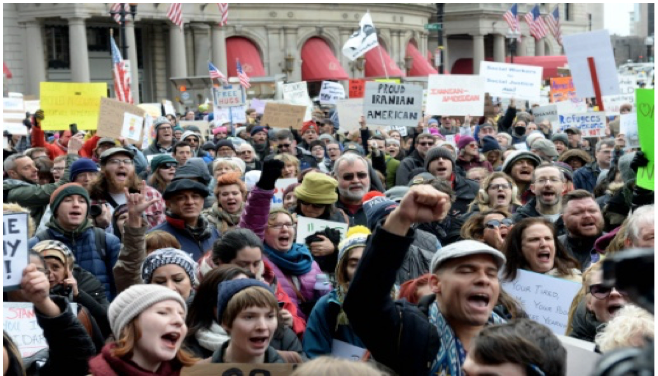 RESISTANCE WATCH--Black Lives Matter. Occupy Wall Street. The Tea Party. Even before the nationwide protests in response to Donald Trump’s election, civil unrest was roiling American politics. Citizens who a generation ago might never have considered speaking out are taking to the streets, shouting down officials at town halls, and deluging your social feeds with diatribes.

And it’s not just the United States: Good data is rare, but one survey of news coverage found that protest actions around the globe annually doubled from 2006 to 2012. It’s hard not to feel like you should be out protesting something these days. So, what’s the best way for the novice agitator to affect change?

From 1900 to 2015, about half of all non-violent campaigns for regime change succeeded, compared to about one-quarter of violent insurgencies. That’s one much-discussed finding from the Nonviolent and Violent Campaigns and Outcomes catalogue of nearly 500 uprisings since 1900, compiled by the political scientist Erica Chenoweth of the University of Denver.

Non-violence works slightly more often than not; violence rarely works. This data only accounts for national movements to secede, or to remove heads of state or military occupations — sweeping fights — so they may not be instructive for narrower protests against, say, excessive use of force by law enforcement in minority communities.

On the other hand, there is some disputed evidence that, in limited circumstances, violent protests can help achieve small, temporary gains in the form of expanded financial assistance for low-income families or higher wages for workers.

… Even When the Other Side Gets Violent

Easier said than done, unless you believe your cause is worth life and limb. Chenoweth and her colleagues Marie Stephan and Jonathan Pinckney have found that violent state crackdowns in response to protests can shake even well-organized, well-trained movements’ commitment to their non-violent principles, and that violent repression is one of the most common points at which such movements fail. Strong, vocal support for non-violence from protest leaders, and extensive training for participants, might be key.

One of the 20th century’s most influential philosophers of activism, Richard Gregg, recognized this when he suggested that protestors should be as well-trained as soldiers, to tame their instinct to respond to violence with violence.

Be Welcoming to Less Ideological Newcomers

The pro-life movement has made striking gains in state legislatures since the 1990s, with new laws limiting abortion access sprouting nationwide every month. At the core of that movement is a legion of activists, many of whom who were initially invited to events despite holding pro-choice views, as Ziad Munson explored in his 2008 book The Making of Pro-Life Activists: How Social Movement Mobilization Works.

One effective strategy of the movement: Once someone with a “thin” connection to the movement gets sucked in, they are encouraged to specialize in one protest tactic, whether it’s outreach to potential recruits, calling congresspersons, or picketing outside Planned Parenthood facilities. Pro-life organizations have gained a lot of very loosely affiliated members with this approach, helping them seem more influential and legitimate.

As much research suggests, the bigger the movement, the more likely it is to secure favorable outcomes.

In early 1933, Dr. Francis Townsend published an open letter calling for every person over the age of 60 to receive $200 per month from the federal government, paid for by a 2 percent national sales tax. Millions of people quickly passed the letter along to their friends, who signed up for the doctor’s newsletter.

Their plan rallied the elderly and set the agenda nationally, but elections loomed and competing, less-generous policies developed in the Senate. The Townsend army’s hardline advocacy distracted from bills with more votes in the Senate, so Franklin Roosevelt — who hated the Townsend Plan — passed the even less generous Social Security Act.

Townsend and his followers were bitterly disappointed, despite having helped create what would become one of the most popular government programs in history. The sociologist Edwin Amenta concluded in his 2010 review of dozens of protest studies, including his own on the Townsend effort, that “movements are less influential in later parts of the policy process” and “a national challenger with far-reaching goals is likely to need its issue already on the agenda.”

In the case of the Townsend Plan, their continued insistence on a perfect solution, along with their opponents’ maneuvering, hampered their ability to secure a more favorable compromise.

Protesters of all ideological stripes look to the early civil-rights movement, leading up to the passage of the Civil Rights Act in 1964, for strategic guidance. In a thorough study published earlier this year, the Princeton University politics professor Omar Wasow measured the effect of non-violent protests on Democratic vote share in the 1964 election.

The Watts riots hurt: Counties near violent protests saw decreased Democratic vote share, which Wasow suggests helped spark the law-and-order backlash that swung the 1968 election to Richard Nixon, and gave us mass incarceration that reformers are still trying to undo: “In public-opinion polls between 1950 and 1980, a majority of subjects identified ‘civil rights’ as the most important problem facing America at the same time that non-violent black protest activity peaked and, likewise, responded with ‘law and order’ when black-led violent protests were most active.”