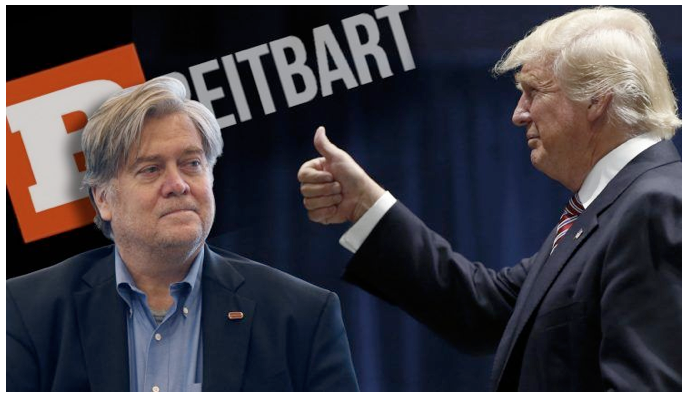 DIVINE THE FUTURE--As a student of history, I’m always drawing parallels between the present and the past. Like many of us, I believe that to divine the future we must understand what has gone before. That’s what makes the actions of Trump, Bannon and company so damn frightening.

Let’s turn back the cover of the fascist playbook and see what’s inside.

First, the lies and then the people who choose to believe them.

Despite the fact that the United States under Barack Obama experienced recovery from the worst economic downturn since the Great Depression, significant expansion in healthcare coverage, and a fairly peaceful world scene, Donald Trump ran a campaign that painted our nation as a failure, crime-ridden and downtrodden, kowtowing to the Chinese and even worse, radical Islam.

The target of these lies was, and continues to be, the susceptible individuals made receptive to belief in “alternative facts” through years of indoctrination by right-wing radio and alt right websites. It’s no accident that Trump’s chief henchman, Steve Bannon, comes from that world. Propaganda is most effective when there’s a willing audience and if anyone knows how to exploit that audience, it’s Bannon. As chief executive at Breitbart, he led the pack of alt right media hounds.

Trump’s battle cry of “Make America Great Again” was just good enough to get him the prize. He is president only because of an anachronistic electoral system in which losing by three million votes at the ballot box becomes winning by 77 in the Electoral College. So the United States is experiencing what life might have been like if someone such as the junior senator from Wisconsin, Joseph R. McCarthy, had become president instead of Eisenhower. Nixon’s “law and order” rhetoric, anti-media bias, and enemies list don’t come close to what may in store under the current regime.

The formula for Trump’s authoritarian witches’ brew is simple:

You are in danger.

Muslims are the enemy.

Only I can save you.

Anyone who opposes me is the enemy (including apparently those who no longer want to sell Ivanka’s clothing brand.)

In keeping with his pledge to remake government, Trump has moved quickly to eliminate regulations to rein in polluters. Gutting consumer protection rules again allows the wolves of Wall Street to roam free. He’s attacked Obamacare, seeking to loosen administrative rules that make the system work.

Most egregious, however, is his order to ban Muslims from seven nations. Despite protestations that this executive decree is not aimed at a particular religion, many know better. The judges who have done their sworn duty to the Constitution are being attacked as encouraging enemies of the state.

The comparisons many in the United States and around the world have made to Trump’s regime and the fascists of the 1920s and ‘30s is apt. For some, “America First” carries the flavor of “Deutschland Uber Alles.” Referring to the current reality in Washington, D.C., Bannon said, “What we are witnessing is the birth of a new political order.”

In 1940, Franklin D. Roosevelt, talking about an earlier political reality, said, “These men and their hypnotized followers call this a new order. It is not new. It is not order.”

It’s time to heed the lessons of history.

(Doug Epperhart is a publisher, a long-time neighborhood council activist and former Board of Neighborhood Commissioners commissioner. He is a contributor to CityWatch and can be reached at: Epperhart@cox.net) Prepped for CityWatch by Linda Abrams.