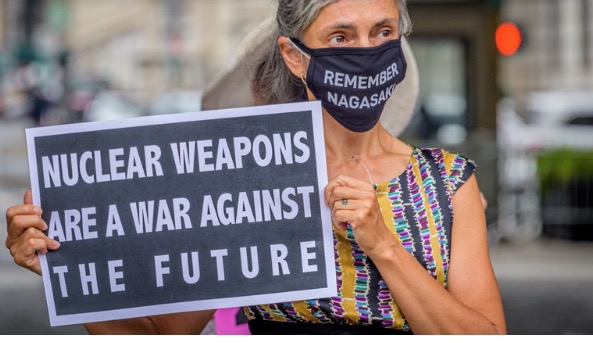 NUCLEAR DETERRENCE - 77 years ago, the U.S. nuclear bombing of Hiroshima, Japan on August 6, 1945 and three days later, Nagasaki, resulted in immediate deaths of approximately 120,000 majority civilians and by year’s end over 210,000.

This legacy continues to this day in large part through the voices of the hibakusha, atomic blast survivors, and through having planted the seeds of the first man-made existential threat, nuclear war.

The global response to the end of World War II and the nuclear bombings was the formation of the United Nations in 1945. From the outset it’s mission was to work to maintain international peace and security, give humanitarian assistance to those in need, protect human rights, and uphold international law. In recent years, the UN has established sustainable development goals for 2030, noting the added and connected existential threat of climate change with its disproportionate burden on poor and island nations.

Simultaneously, the United States and Russia began the nuclear arms race, currently in its second iteration, with 12,700 nuclear weapons in the arsenals of the nine nuclear nations with the U.S. and Russia possessing 90%. These weapons threaten our very survival as a species, and indeed all living things every moment of every day.

This global threat to which the Bulletin of Atomic Scientists kept their Doomsday Clock setting at 100 seconds to midnight in January was heightened this year with the invasion of Ukraine on February 24 by nuclear-armed Russia in its war of aggression and acquisition. This conflict has brought us closer to nuclear war than at any point in the nuclear age. Hardly a day goes by without one side reminding us of their nuclear capabilities and the potential for nuclear war. Nuclear weapons do not make us safe and have not prevented war but rather have brought us closer to realizing the catastrophic outcome of nuclear war either by intent, miscalculation or accident. The fact that this has not happened to date boils down to pure luck and luck is not a security policy.

Incredulously, the nuclear states have continued their magical thinking of deterrence, modernizing, rebuilding and enlarging their nuclear arsenals. They remain oblivious to, or ignorant of, the prevailing scientific evidence demonstrating the catastrophic global effects of even a limited regional nuclear conflict, such as one that might occur between India and Pakistan using less than 1/2 of 1% of the global arsenals ultimate resulting in 2 billion deaths from the nuclear famine that would follow such a conflict. Upcoming reports will show that this risk too is actually even greater.

Currently the UN is convening the 10th Review Conference of the 1970 Nuclear non-Proliferation Treaty (NPT) which has been considered to be the cornerstone of nuclear disarmament. Expectations for this review conference are not high as none of the original five nuclear states have shown any intention of meeting their legal obligations to “Negotiate in good faith the elimination of their arsenals” called for under Article Vi of the treaty. Rather, they are using their participation as cover and a charade to rebuild and enhance their arsenals.

Frustrated by the lack of serious intent and refusing to be bullied any longer the non-nuclear nations have come together since 2010 with the assistance of the International Campaign to Abolish Nuclear weapons (ICAN) to develop and ratify the Treaty on the Prohibition of Nuclear Weapons (TPNW) which entered into force on January 22, 2021. This treaty declares nuclear weapons and the threat of their use illegal, just as each of the other weapons of mass destruction have been declared illegal. It sets forth the legal framework for nations to abolish their nuclear weapons in a verifiable, enforceable time-bound manner.

In the United States there is a rapidly growing coalition working to move back from the brink of nuclear war. This coalition, Back from the Brink, calls on the United States to change its nuclear policy and to take a leadership role in the work to eliminate nuclear weapons. Supporting the Treaty on the Prohibition of Nuclear Weapons with the immediate precautionary measures, the campaign calls for the U.S. to take a leadership role by:

This campaign has been endorsed by 329 local, state and nationally elected officials, 60 municipalities and 7 state legislative bodies along with 415 organizations including every major religious, health, environmental and peace organization. As an individual reading this now, you can be an endorser of this campaign. You can demand that your local, state and federal elected officials do so. You can encourage organizations you belong to that have not yet endorsed this campaign to do so. Taking action is within your power.

This moment in history is indeed a teachable moment. We know what devastation can occur. We know how to prevent it. The science is clear and so there is hope. The world we hope to leave to our children’s children demands that we take these actions now and learn from the past,  thus preventing us from being doomed to repeat it. Each of us can and must play a role in this effort for our future.