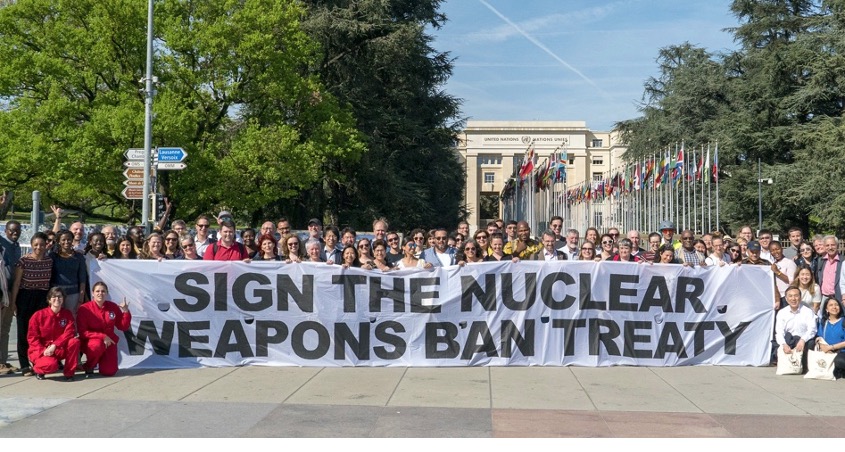 NUCLEAR DISARMAMENT - The Treaty on the Prohibition of Nuclear Weapons has been ratified by 65 governments, known in diplomatic circles as States Parties.

The treaty’s first Meeting of States Parties (1MSP) concluded here June 23, after painstakingly working out — in the words of the International Campaign to Abolish Nuclear Weapons — “a blueprint for the end of nuclear weapons.” The New Treaty is the extraordinary, crowning achievement of ICAN, which won the 2017 Nobel Peace Prize for its efforts.

At 1MSP, The Netherlands, Belgium and Germany — all three of whom use U.S. nuclear weapons on their air force bases — participated as Observer States. The three have not ratified the TPNW, having acquiesced with a string of U.S. administrations — Obama’s, Trump’s, and Biden’s — that conspired at every opportunity to derail, prevent, delay, weaken, and boycott the new ban — in spite of Broad Public Support For Nuclear Disarmament. Mr. Trump demanded that States Parties withdraw their ratifications. None did. Biden’s White House reportedly urged Japan not to attend the 1MSP as an Observer, and they stayed away.

German and Dutch representatives took their turn and spoke to the MSP on June 22, but both NATO members used exactly the same words to note their government’s explicit disapproval of the TPNW, and to voice their supposed support for the 1970 Nuclear Non-Proliferation Treaty. Both representatives said their governments “will not accede to” the nuclear ban treaty “because the TPNW is inconsistent with NATO doctrine.”

As German Representative Rüdiger Bohn said June 22, NATO “doctrine” includes the doleful edict, “As long as nuclear weapons exist, NATO will remain a nuclear Alliance.” This embrace of genocidal atomic violence is not an Article of the 1949 North Atlantic Treaty Or NATO Charter. It was manufactured entirely by its nuclear-armed members, and there is no legal obligation for NATO to remain a nuclear-armed terrorist organization.

NATO “doctrine” is fluid, strictly advisory, and accepted voluntarily by its members. Even the NATO Charter’s famous Article 5, regarding collective response to a military attack on a member state, declares only that the NATO membership “will assist the Party or Parties so attacked by taking … such action as it deems necessary.”

In comparison, the Non-Proliferation Treaty is binding international law and includes explicit, unambiguous prohibitions and clear, binding obligations. NATO’s ongoing planning, preparations and ever-present threat to launch nuclear attacks (known as “deterrence”), is simply a ritualized practice which can be ended at any time — say by complying with the NPT’s Articles I and II which prohibit any transfer or reception of nuclear weapons between states, or its Article VI pledge to negotiate nuclear disarmament. Indeed, it is the 50-year-long postponement, or rejection of Art. VI that has prompted and propelled the overwhelming success of the new TPNW.

What might have been a week-long celebration of the TPNW’s progress in seeking a world free of nuclear threats, was dimmed by Russia’s ongoing war on Ukraine. It was the war’s spoken and unspoken reminders of ready nuclear arsenals in Russia and NATO that moved the MSP to say, in its Final Declaration, that it “condemn[s] unequivocally any and all nuclear threats, whether they be explicit or implicit and irrespective of the circumstances.”

The Declaration castigates nuclear weapons and echoes Daniel Ellsberg’s 1959 Essay “The Threat and Practice of Blackmail,” noting that the Bomb is used to coerce, intimidate, plague, curse, and terrify. “This highlights, now more than ever, the fallacy of nuclear deterrence doctrines, which are based and rely on the threat of the actual use of nuclear weapons and, hence, the risks of the destruction of countless lives, of societies, of nations, and of inflicting global catastrophic consequences.”

The Parties agreed to push ahead with resolve to eventually see the nuclear weapons states sign on, saying “In the face of the catastrophic risks posed by nuclear weapons and in the interest of the very survival of humanity, we cannot do otherwise.”

(John LaForge, syndicated by PeaceVoice, is Co-director of Nukewatch, a peace and environmental justice group in Wisconsin, and is co-editor with Arianne Peterson of Nuclear Heartland, Revised: A Guide to the 450 Land-Based Missiles of the United States.)