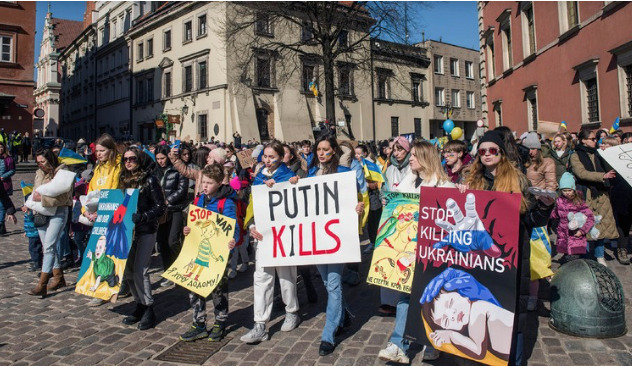 SAY WHAT? - As Russia's brutal assault uproots the lives of nearly a quarter of Ukraine's population, the world rises in striking unanimity, and in  wildly disparate ways, against it. Especially brave, given a mad czar who's taken to calling critics "gnats," “bastards and traitors” to be purged, is resistance from Russia itself. This week, Putin forced out Arkady Dvorkovich, head of a prominent technology foundation and the International Chess Foundation, after he "took the side of the enemy" by telling Mother Jones, "My thoughts are with Ukrainian civilians” and, "Wars kill hopes and aspirations." In response, Mother Jones has joined a global campaign by alternative media outlets to save Meduza, Russia's last remaining independent newsroom, still working to "get the truth about the war to Russians every day." Improbably but effectively joining that effort is America's own Terminator, Arnold Schwarzenegger, who posted a heartfelt, now-viral video addressed directly to Russian soldiers, who evidently love him. Refuting the lies to blame only the Kremlin - "This is not the Russian people's war” - he echoed a video he made after Jan. 6 that summoned dark Nazi history he witnessed as a child that turned his father and many others into "broken men drinking away the guilt." "You already know much of the truth I have been speaking," he said. "I don't want you to be broken like my father."

Others around the world have offered what they can. Mothers in neighboring Poland and Slovakia, seeing the desperate waves of women and children streaming across their borders, are leaving rows of packed strollers for them at train stations; residents have also collected tents full of diapers, snowsuits, baby food. In Canada, hospitals have begun receiving and treating Ukrainian kids with cancer, airlifted out by non-profits and veterans who helped evacuate people from Afghanistan; they hope to get many more. In Chicago, artist Joe Trupia, following up on his "very dumb dream" to take LEGOs and "print his own wildly inappropriate unique designs on them" with Citizen Brick, has made two models symbolizing Ukraine's "bravery in the face of tyranny." Impressed by "his steadfastness, (the) hope he seems to give to people" and the fact he "could've fled the country with a suitcase full of money," he made a teeny President Zelensky, with  green shirt, short hair, stubble, fatigue; he also made a teenier Molotov cocktail, with flag and plastic flame. Both have sold out; he donated the $145,000 in proceeds to the humanitarian group Direct Relief - and yes, “The irony of selling a little toy incendiary device (to) buy medical supplies for refugees isn’t lost on me.” In North Carolina, Lost Worlds brewery is raising money for Ukraine's Fund for Refugees by selling a blue-and-yellow-bedecked beer; the label reads, "Putin is a dick."

Finally, making not money but music, acclaimed novelist Haruki Murakami opted to protest Russia's incursion by hosting a special edition of his Japanese radio show Murakami Radio Tokubetsuban,  titled, in English, "Music to Stop the War." From his extensive private collection of records and CDs, he chose 10 songs, mostly from the 1960s and 70s when he came of age. Some were explicitly anti-war; others were more obliquely so, celebrating "the importance of human life, love and dignity." He also set out to explain the historical context of their lyrics - racial and social disparities of the time - and translate some into Japanese. The show aired Friday night on Tokyo FM and a network of 38 more FM radio stations across the country. “In Ukraine, a war no one wants has begun," noted Murakami, 73. "Can music stop war? Probably not. But it has the power to make listeners believe that war is something we must stop." Some of his choices: Peter, Paul & Mary’s “Cruel War,” “Unknown Soldier” by the Doors, James Taylor’s “Never Die Young,” “Last Night I Had the Strangest Dream,” written in 1950 by Ed McCurdy and sung by the anti-war Weavers, who were banned from radio. Personally, we'd have added something from the late, great, oft-neglected Phil Ochs. Maybe "The War Is Over," where we're bitterly asked to, "Trust your leaders, where mistakes are almost never made."

"And the gargoyles only sit and grieve

The gypsy fortune teller told me that we'd been deceived

You only are what you believe

And I believe the war is over