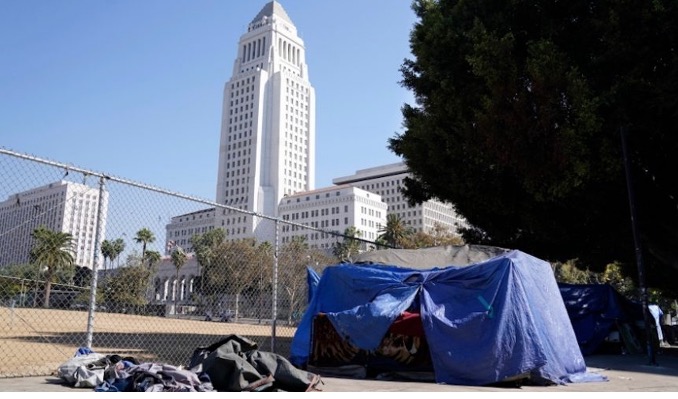 UNHOUSED - The homelessness crisis in Los Angeles just didn’t happen out of nowhere.

Over the years, there were horrible political decisions made by elected leaders on the state and local levels that fueled the ongoing humanitarian catastrophe – between 2020 and 2021, nearly 1,500 unhoused residents died on the streets in the L.A. area. We could roll out a long list of bad calls, but here are five that stick out to us.

One and Two: The passage of the Ellis Act and the Costa-Hawkins Rental Housing Act

A huge factor in the worsening homelessness crisis has been a decades-long assault by state politicians on existing affordable housing, which has severely impacted Los Angeles residents. Without a robust supply of affordable housing, the working class and poor will end up on the streets. It’s that simple. Numerous studies have pointed to this fact, including reports published by UCLA and Zillow, the real estate site.

Alisa Belinkoff Katz, a researcher at the UCLA Luskin Center for History and Policy, found that the lack of affordable housing, skyrocketing rents, and declining incomes “have made housing unaffordable for almost half of middle-income renters and nearly all those who are poor. This in turn has exacerbated the epidemic of homelessness on [L.A.’s] streets.”

Zillow, meanwhile, found that in cities where people spend more than 32 percent of their take-home pay on rent, a spike in homelessness will follow. In fact, Zillow noted that “declining rent affordability affects homelessness in Los Angeles with eight times the force it does in Baltimore.”

Enter two horrendous decisions made by state legislators when they passed the 1985 Ellis Act and the 1995 Costa-Hawkins Rental Housing Act.

For decades, the Ellis Act has allowed landlords to evict tenants in rent-controlled buildings and turn their properties into luxury housing, such as condos or boutique hotels. As a result, according to the Coalition for Economic Survival and the Anti-Eviction Mapping Project, 28,013 rent-controlled units in Los Angeles have been taken off the market between 2001 and 2022 due to the Ellis Act. It’s a massive loss of affordable housing that’s fueled homelessness.

Around the same time, the Costa-Hawkins Rental Housing Act placed statewide restrictions on rent control and allowed landlords to charge market-rate rent after a tenant moved out of a rent-controlled unit. In other words, more affordable housing was lost in L.A. – and more homelessness followed.

Housing justice activists in L.A. and other California cities saw the humanitarian disaster playing out on the streets, and attempted to change Costa-Hawkins through statewide ballot measures in 2018 and 2020. But corporate landlords such as Equity Residential and Essex Property Trust shelled out tens of millions in campaign cash to successfully defeat those initiatives.

In Los Angeles, single-room occupancy hotels (SROs) have long provided affordable housing for poor and working-class residents. In fact, SROs have been essential for keeping people out of homelessness. But over the years, L.A. politicians have decided to either allow landlords to empty SROs and keep them vacant for crude business reasons or allow SROs to be converted for other uses, such as a boutique hotel or a market-rate apartment building. It’s another assault on affordable housing.

Recently, as part of its “Save Our SROs” advocacy campaign, Housing Is A Human Right found that 3,868 SRO units in 25 buildings in the Downtown L.A. area are sitting vacant or have been converted. Ninety-one SRO units in two buildings have been demolished. In addition, many of L.A.’s largest SROs are vacant – buildings that can be used right now to house low-income and homeless residents. They include the Clark Hotel (500 units), Cecil Hotel (615 units), Embassy Hotel (330 units), Morrison Hotel (111 units), and Holland Hotel (75 units).

Housing Is A Human Right has implored L.A. politicians to act.

“It’s outrageous that L.A.’s SROs sit vacant while unhoused residents are literally dying on the streets,” Susie Shannon, the policy director of Housing Is A Human Right, said recently. “This is a public health emergency that demands swift, bold action. We urge the L.A. City Council and Mayor Eric Garcetti to utilize the adaptive reuse of vacant buildings and quickly turn them into low-income and homeless housing. People’s lives hang in the balance.”

Four: The Devastation of Trickle-Down Housing

Also for years, state and L.A. politicians have pushed trickle-down housing solutions to solve the housing affordability and homelessness crises. In other words, they want to build more luxury housing for the housing affordability and homelessness crises, saying that eventually the benefits will trickle down to working-class and poor residents. It’s insanity. But it’s a profit-driven agenda that’s pushed by major developers, who are big-time campaign contributors, so state and L.A. politicians have gone along with it.

As part of this agenda, developers and the real estate industry also say that politicians can’t pass any kind of tenant protection that supposedly gets in the way of building more luxury housing. But without strong protections, working-class and poor residents will face the real possibility of homelessness, if not actually fall into homelessness.

Five: Politicians’ Decision to Not Act

But Housing Is A Human Right does offer a blueprint for action that state and L.A. politicians can immediately implement. It’s called the “3 Ps”: protect tenants through rent control and other protections; preserve existing affordable housing, not demolish it; and produce new affordable housing through cost-effective methods such as the adaptive reuse of existing buildings. This strategy directly and quickly addresses the housing affordability and homelessness crises in L.A., and will reverse the damage caused by years of bad political decisions.

(Patrick Range McDonald is the award-winning advocacy journalist for Housing Is A Human Right and a CityWatch contributor.)