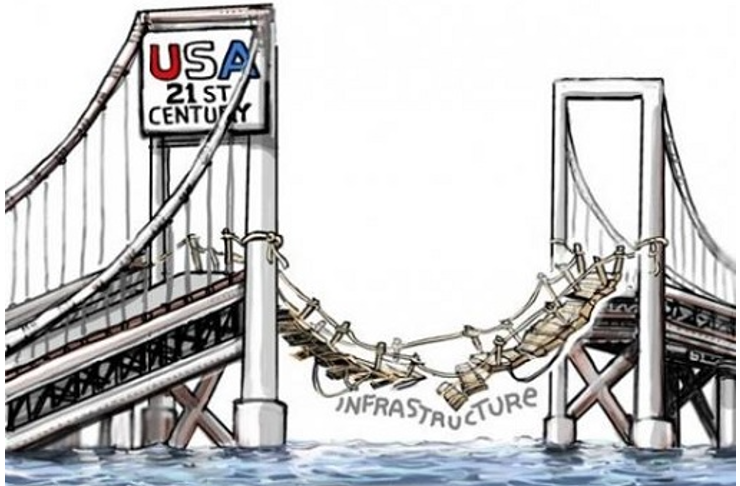 PLANNING WATCH - By now you could fill a small library with books and articles about the decline of the United States as a global empire.

Most historians pick WWII as the beginning of US global hegemony, with the country peaking in the late 1960s, before its defeat in Vietnam and subsequent forever wars in Afghanistan, Iraq, Syria, Libya, and Somalia.  Historians disagree, however, when, or even if the US empire will sail into the sunset.   Some analysts, like University of Wisconsin History Professor Alfred McCoy predict collapse could come as early as 2030.  Others, such as the late UC historian Chalmers Johnson, maintained that the US could hold out until 2050, at which point the country would implode from internal decay resulting from bloated military budgets and endless foreign wars.

Scholars like Johnson focus on imperial over-extension and the inevitable blow-back that it causes.  More recent studies build on Johnson’s work but move the timeline forward because of the worsening climate crisis.

In his most recent book (To Govern the Globe, World Orders and Catastrophic Change), Prof. McCoy argues that this country’s political leaders’ decisions to plunk $8 trillion into military debacles sharply contrasts to China’s.  China has carefully avoided military conflicts, and by limiting its military expenditures, it has also boosted its international standing and accumulated a trade surplus of $4 trillion.   These funds have bankrolled both international and domestic projects, like 24,000 miles (38,000 kilometers) of high speed rail and China’s massive Belt and Road Initiative.  When completed by the end of the current decade, the Belt and Road Initiative will knit together the entire Eurasian landmass, plus Africa, by ports, protected sea lanes, two high speed rail corridors linking China and Europe, and state-of-the art Internet connections. 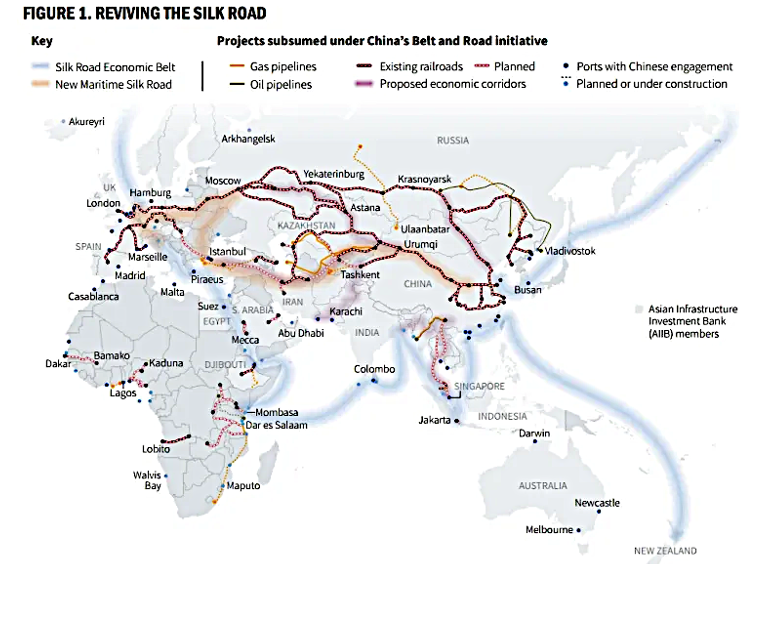 But Prof. McCoy predicts that China’s global dominance will be short-lived because climate change will overwhelm China’s most productive agricultural areas by 2050, leading to the country’s collapse.

These predictions, and many more, will soon be proven correct or incorrect.  Of course, none of these changes will be instant, although Professor McCoy argues that the decline of empires sharply accelerates at their end.  For example, WWI quickly finished off the Russian, German, Austro-Hungarian, and Ottoman Empires, while WWII did the same to the British and French empires.  While the US empire mostly consists of 800 foreign military bases and extensive elections and governments, there are far more similarities than differences in US efforts to maintain this country’s dominance.  Even the celebrated author of The End of History?, Francis Fukiyama, who argued in 1992 that American hegemony would be permanent, recently acknowledged that the US position is quickly ending.  In Fukiyama’s words, “The United States is not likely to regain its earlier hegemonic status, nor should it aspire to.”

Difficulties in predicting the future.  We should remember two things as these events unfold during the next several decades.

While we witness or experience myriads of formerly housed people living in cars and tents or sleeping in alleys and sidewalks, let us recall how we got to this low point and what it portends:

Taken to its logical conclusion, the current housing crisis reveals why the ship of state is heading straight into the rocks.  When local governments adopt give-away real estate policies, like the 2021-2029 Housing Element, the real-world consequences can only be dealt with by the police.

This process is a downward spiral.   The imaginary cures to the worsening housing crisis, up-zoning, density bonuses, and criminalization only make the crisis worse.   Furthermore, the criminalization of the homeless has been buttressed by media campaigns to convince the gullible that growing poverty and homelessness result from personal faults, not societal ones.  This approach, including its reliance on heavy-handed policing, can only postpone the inevitable for so long.  The percentage of the population subject to rent gouging, overcrowding, evictions and displacement, homelessness, and police harassment is getting larger.  Police budgets are still growing, a major reason why the Los Angeles City will increase the LAPD’s finances by 12 percent ($200 million) in 2022 despite last year’s promises to reduce LAPD funding.

In a sensible world the New Deal programs would be resurrected.  But declining powers, like the U.S., are so focused on short-term profitability that neither major political party bothers with this option.  Despite 600,000 homeless people on any given night in the United States, as well as 40,000 homeless in Los Angeles and growing, elected officials turn to the police -- instead of public housing, better public health, and higher wages -- for an immediate (non)solution to the housing crisis.

By treating symptoms, not underlying causes, the housing crisis gets worse.  The dollars that could be devoted to curing it are diverted to the Pentagon at the national level and the police at the local level.  Furthermore, vigilantes have already appeared to help the police brutalize the homeless.  If caught, Kyle Rittenhouse has shown these ”volunteers” how to avoid jail time.

The housing and police policies that are responsible for this downward political spiral are overwhelmingly bi-partisan.  Both major political parties rely on an increasingly militarized police to deal with local “disorder,” whether Occupiers, BLM supporters, or homeless encampments.

Will this approach eventually work?  Can it stop pushback to its housing and criminalization programs by brute force?   While possible, it will come at great cost, and that is the implosion that Prof. Chalmers Johnson predicted by mid-21st century.  In this case, the sham cure of police repression is nothing more than a second route to eventual collapse.  It has happened many times in human history, despite an abundance of Jeremiah’s who told people what was right in front of their eyes.

(Dick Platkin is a former Los Angeles city planner who reports on local planning issues for CityWatchLA.  He serves on the board of United Neighborhoods for Los Angeles (UN4LA) and co-chairs the Greater Fairfax Residents Association.  Previous Planning Watch columns are available at the CityWatchLA archives.  Please send questions and corrections to [email protected] .)