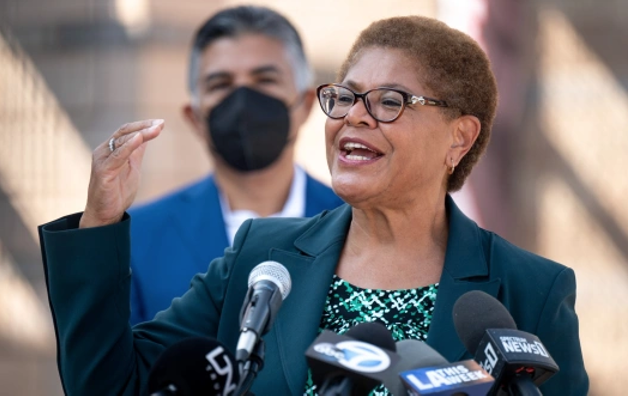 EASTSIDER - Like Antonio Villaraigosa before him, Kevin De León had a plan. Run for City Council, and two years in become Mayor of the City of Los Angeles. Then along came Karen Bass and it all went to hell.

Of course he wasn’t the only incumbent left hanging. We also have (so far) Joe Buscaino, termed out City Attorney Mike Feuer, along with outsiders Jessica Lall, and Mel Wilson. The latter two are not City Hall officials. Lall runs the Downtown Central City Association, and Wilson is a San Fernando real estate broker active in local business groups.

Of the Councilmembers, we know that Mark Ridley-Thomas and Nury Martinez are out. For the rest, stay tuned.

The Inside Outside City Council and Mayor

Let’s be honest. As a practical matter, LA has been without a real Mayor since Eric Garcetti’s bid for the 2024 Olympics fell through. Ever since, he’s been disengaged, flying all over the U.S. looking for another job.

In his absence, it seems to me that the City Council has also changed, especially since the incredible fall of Jose Huizar, or as I prefer, “Gods Gift to the Eastside.” Right now, we are operating with 15 fiefdoms, without any vision for you and I. If you don’t believe me, just check out the Council’s “Homeless Ordinance,” which makes the autonomy of the Council districts complete.

And oh by the way, Busciano is already being attacked by his “peers” on the Council, who are already demanding his removal as President pro Tempore.  As the Times put it:

“Six members of the Los Angeles City Council called Tuesday for Councilman Joe Buscaino to be removed from his leadership post, days after he and his spokesman were quoted in a magazine article making disparaging remarks about other council members.

Council President Nury Martinez and five of her colleagues drafted a motion calling for Buscaino to be stripped of his position as president pro tempore — the No. 2 leadership position on the council — and replaced by Councilman Mitch O’Farrell.

It’s the most visible sign so far that the race for Los Angeles mayor is intruding on the workings of the council. Martinez did not answer questions about the article, instead issuing a one-sentence statement acknowledging the effort to remove Buscaino.

“The time has come for Joe to run his race for mayor,” she said, “and I will continue to focus on leading this city and this council without distraction.”

In fact, just a day or so ago the City Council voted to remove Busciano as President pro tempore and replace him with CD13’s Mitch O’Farrell. Go figure.

And Then There is Kevin De León

We all know that being a big deal in Sacramento, De León wanted to replace Jose Huizar in CD 14 so he could launch a bid for Mayor in two years. As I wrote during the 2020 CD 14 election:

“So, after losing to Dianne Feinstein, Kevin was faced with the default of running for CD 14 on the heels of his old buddy Jose Huizar. The good part is that it pays a lot of money. The bad part is, truth to tell, being a City Council member does not confer the status of doing ‘big things’       like statewide legislation. In fact, it’s boring. Small potatoes.

But a guy must have a gig. And in this case, the position of Mayor is open in 2022 when Garcetti is termed out. Now there’s a prize. So, the likelihood is that he will do an Antonio and bail out halfway through the term to run for Mayor. Perhaps good for Kevin, but not good for CD 14 And I remember that Villaraigosa was more interested in his Mayoral run than he was in the residents he represented for 2 years.”

As we now know, it was all true. Yet for some reason De León decided to make homelessness his main theme once he was elected in 2020.  As the LA Times noted:

And even though the City Council and their actions on homelessness have been draconian, punitive, and without much actual help, De Leon has determined to double down on his strategy as he runs for Mayor. Here’s how the Times characterized the race:

“Homelessness is already the top issue of the campaign. But the question of what to do is much more complex than decreeing when and how encampments should be moved.

Homelessness is the most visible sign of deeper problems in Los Angeles, which is  increasingly a city of extremes. Homes in working-class neighborhoods now list for $1 million or more, while more than 40,000 people are homeless, according to the last count. High-skilled  workers have seen their wages shoot up, while low-skilled workers’ pay has been nearly flat.

The candidates have to grapple with these larger economic and societal challenges, and offer concrete ideas for how they’ll address the housing shortage, as well as income and opportunity inequality within the city.”

Now We Have a Real Choice

Finally we now have a candidate who is not part of Los Angeles City elected Officialdom. Even better, Karen Bass is no stranger to the City of Los Angeles, in her 37th Congressional District. Check out this Wikipedia article:

“Karen Ruth Bass (/ˈbæs/; born October 3, 1953) is an American politician and social worker serving as the U.S. Representative for California's 37th congressional district since 2011. The district, numbered as the 33rd district for her first term, covers several areas south and west of downtown Los Angeles. A member of the Democratic Party, she previously served for six years in the California State Assembly, the last two as Speaker. She is a candidate in the 2022 Los Angeles mayoral election.[7][8]

Before her election to Congress, Bass represented the 47th district in the California State Assembly (2004–2010). In 2008, she was elected to serve as the 67th Speaker of the California State Assembly, becoming the first African American woman in United States history to serve as a Speaker of a state legislative body.[12][13] She won the John F. Kennedy Profile in Courage Award in 2010 for her leadership during the Great Recession.[14]”

As Politico reported on her announcement:

“Bass (D-Calif.) capped weeks of speculation by confirming she was running to replace outgoing Mayor Eric Garcetti, saying in a statement she was joining the race "with my whole heart." POLITICO reported Friday that Bass had decided to run.

“Our city is facing a public health, safety and economic crisis in homelessness that has evolved into a humanitarian emergency,” Bass said. “I’ve spent my entire life bringing groups of people together in coalitions to solve complex problems and produce concrete change — especially in times of crisis.”

A well-known figure in Los Angeles politics after being state Assembly speaker and serving multiple terms in Congress, Bass enters the race with the advantages of broad name recognition and support from liberal and Black voters. She has already drawn pledges of support from progressive donors and the leadership of the Congressional Black Caucus.”

It also appears that she comes to the fray with considerable funding, which you can check out here.

The race for Mayor of the City of Los Angeles just went from mostly the same old faces to a real contest. Let the race begin!

(Tony Butka is an Eastside community activist, who has served on a neighborhood council, has a background in government and is a contributor to CityWatch.) Photo by David Crane, Los Angeles Daily News/SCNG. Edited for CityWatch by Linda Abrams.