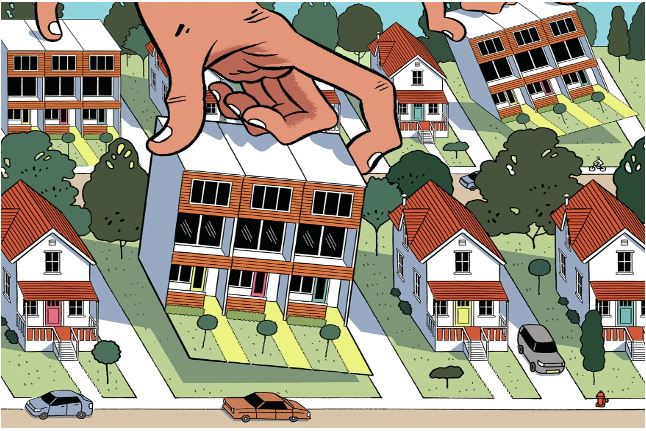 PLANNING WATCH - The new mantra of the infill real estate speculators and their advocates is end exclusionary zoning.

They say such zone changes would promote racial equity, transit ridership, climate change mitigation, and intergenerational wealth transfer among minority families. In contrast, I say these are transparent cover stories, and the real reason they use the term exclusionary zoning is that existing zoning limits their ability to maximize profits.

This mantra now resonates through the White House, Congress, State Capitols, City Halls, and editorial pages, with little thought about it long-term consequences. By exclusionary zoning the developers and their allies focus on residential zoning laws whose hidden agenda was, they say, the exclusion of minorities by requiring large lots and setbacks. These zoning laws were then reinforced by five other processes, four of which have been expressly banned by the Supreme Court or Congress.

Except for police violence, these practices have been formally banned and rarely appear. The lingering question is, therefore, what impact do old zoning laws and practices have on the current demographic composition of neighborhoods in an ethnically diverse city, like Los Angeles, in which the City Council adopted most zoning laws 75 to 90 years ago.

The advocates of up-zoning say, axiomatically, that historic zoning laws are responsible for current racial and ethnic patterns. They also claim that up-zoning single-family lots automatically permits apartments, and this will reverse the lingering effects of historic zoning laws. They also claim that up-zoning promotes equity and the intergenerational transfer of wealth in minority families.

There are many problems with this story. A closer look reveals that up-zoning, whether imposed by the Biden Administration, California State Legislature, or Los Angeles City Council, does not reverse racism. In fact, if up-zoning laws were monitored, the data would reveal that up-zoning increases economic and racial inequality. This is why:

Even though the case for up-zoning falls apart when closely examined, this has not slowed down the efforts of elected officials to deregulate zoning, building, and environmental laws. Unencumbered by facts and monitoring programs that would reveal that their up-zoning programs are a hoax, they are barreling ahead. If they are lucky, the consequences of their folly will become undeniable after they are termed out. If not, the spinmeisters will need to burn the midnight oil to explain why their bosses’ best intentions went awry.

(Dick Platkin is a former Los Angeles city planner who reports on local planning issues for CityWatch.  He is a board member of United Neighborhoods for Los Angeles (UN4LA) and co-chairs the Greater Fairfax Residents Association. Previous Planning Watch columns are available at the CityWatchLA archives. Please send questions and corrections to [email protected].). Image:  Jason Ford