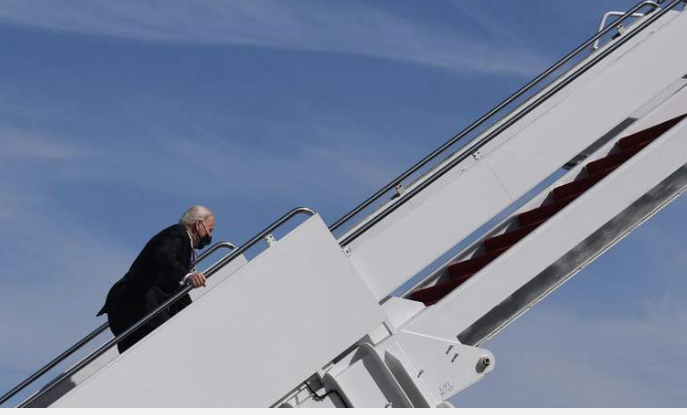 THE DOCTOR IS IN - You, me, the folks behind that tree, the mainstream media, social media, and even Hollywood can all hate on the Presidential Administration that resided at 1600 Pennsylvania between 2017 and 2021...

but it's not hard to conclude that President Biden royally screwed over the middle class and rising inflation by in his berserk efforts to "de-Trumpify" the United States of America.

So...whaddaya know???!!! Joe Biden is concerned about rising energy prices and their effects on inflation and an economic recovery from the pandemic.

Since former President Jimmy Carter first called for it generations ago, America became energy-independent and became an EXPORTER of energy under President Trump.

1) Enter President Biden, who ended the Keystone Pipeline and still is putting his foot on the necks of those who fight for it, while opening up Russian access to European markets with their own oil pipeline.

2) Enter President Biden, who calls for mandated fewer automobile emissions while not acknowledging the limits of electric cars and the hideous non-biodegradability of electric automobile batteries .

3) Enter President Biden, who smashed the pace of the Abraham Accords (because they were promoted by President Trump) to economically link Saudi Arabia and other America-friendly nations in the Middle East with Israel and the United States...and now we're more reliant on OPEC nations who are NOT always as friendly as Saudi Arabia to the United States.

So how did we get here in a few short months after the Orange Man left office?

1) Because President Biden, in leaning FAR, FAR, FAR to the Left in ways that many Democratic voters are rather shocked by (ending or threatening single-family neighborhoods and zoning laws...reeeeeally, President Biden?) is doing anything BUT unite the nation as he promised.

2) Because President Biden, in appeasing Bernie Sanders and the Woke-Left Mob, who truly do NOT adhere to science or economics (and maybe they flunked those classes in college when they chose non-STEM majors), is making the rich-poor divide go UP, and the future of the middle class go DOWN.

3) Because President, with his numerous presidential proclamations and feel-good policies that made and make the Far Left grin with REVENGE do NOT make for good scientific, economic, or energy/environmentally-smart results.

President Biden can still get back to "uniting the nation" as he promised to do when he entered office, and if he so chooses. But if he keeps slapping around the interests and priorities of those who chose to vote for his opponent (and there were quite a lot of them!), then divided more than ever we shall stay.

And the price will not only be political in nature, but an economic one that may be acceptable to Big Tech executives and public sector civil servants--who have jobs and retirement ensured--but will threaten the present and future economic survival of American consumers and taxpayers who are forced to pay for the policies imposed upon middle-class America.