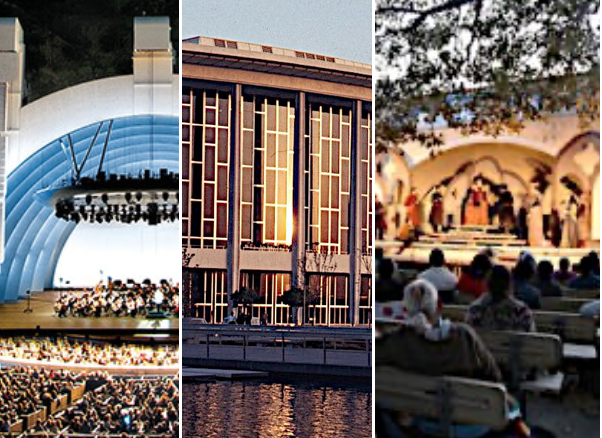 Shakespeare by the Sea

As you can see, we've got the big name, world class outfits and the up-and-coming youth presentations. Let's start by talking about the Hollywood Fringe Festival.

The term "fringe" goes back half a century to a critic who noticed the efflorescence of small group presentations surrounding the Edinburgh Drama Festival. He pointed out that in addition to the big ticket items, a fringe had grown up. A new term was thereby introduced into the English language. The Edinburgh Fringe became a draw of its own.

It's not surprising that other places decided to put on festivals of their own and use that word "fringe."

It's perhaps a wee bit amusing that these fringes aren't actually fringes in the sense that they don't have anything to surround. But the term "fringe" is so ensconced in our modern language that it's use is all but inevitable, particularly if you want to invite small companies to create brand new works of their own.

It's been a long year. Everybody went dark in 2020, and we've all been waiting to see if and when the lockdown would end. As the above list indicates, we've got live performances going on all around us.

As I have pointed out in previous years, the preview week is actually a rewarding opportunity. You get a chance to see amateur theater and music in all its brilliance and stumbling, and you can catch three or four or five shows in one single day. Just bring a couple or three twenty dollar bills to cover the minimal ticket prices (typically around $10, and sometimes pay what you want). You might want to get together with the casts over at the bar later the same evening.

Here is a link to what the festival refers to as Musicals & Operas. Will any of them be wonderful? Who knows? But my experience in coming to the fringe has been that the musicals have been among the better performances. This year features a couple of shows that I will be trying to catch: The Layers of Tom Lehrer, and Gideon & the Blundersnorp.

Tom Lehrer became famous on the television show That Was the Week That Was in an era of fear over nuclear war ("Goodby mom, I'm off to drop the bomb")  and a society caught in turbulent change. It will be interesting to see how a younger performer carries this off.

The Festival sees itself as a community, but this is not without some controversy

On Saturday, two of the Fringe Festival leaders hosted what was called a "consent and conduct workshop." Much of what was said at the workshop consisted of private communications among people who intend to present shows at the upcoming festival. The general intent of the meeting was to talk about avoiding words and messages that would be hurtful to others -- at least that's what it seemed to be about from my vantage. I wondered whether there was some serious underlying conflict within the Fringe community, since there was a big scandal in Chicago a few years ago about a celebrated stage director who abused his actresses physically and sexually. Were we talking about some incipient scandal right here in Hollywood?

The main story that was stated on the record is the view of management that the Hollywood Fringe has developed its own alcohol culture. There are end-of-evening parties at the bar, and people buy themselves a beer or three. This by itself wouldn't be an issue, but there have been a few people who turned out to be difficult drunks. There was a request that people kind of watch it. This of course has nothing to do with your experience as an audience member.

There was one other issue that came up. People were invited to present, along with their names, their preferred pronouns. For example, if you were to refer to me, I would expect you to use the term "he" or the word "him." (Actually, I would expect you to refer to me as Bob, but the preferred pronoun thing has become an issue in our current social discourse.) Honestly, I don't see why pronoun usage is going to come up in a theatrical production unless the author chooses to make it a theme, but this was just one of the attempts at inviting increased civility among play-goers and playwrights in general.

And then, in a completely different context, I came across a use of an alternative pronoun in a story about international soccer. You can see the context and the quote in the "end of an era" story below.

I mentioned above that the Hollywood Bowl is back in business running its live performance summer festival. I hope to get out to at least one show this summer. In the Fall, we can expect live performances at LA Opera to resume, leading off with Il Trovatore and leading into Tannhauser. Each is a masterpiece in its own distinct form. The Tannhauser performances will be among the few chances to experience Wagnerian opera in this part of the world. Most of us are used to hearing snippets (such as the Pilgrims' Chorus from Tannhauser) but the experience in its actual operatic context is far richer and deeper.

Of course there is always the possibility that our civilization will have to hunker down once again should some particularly virulent strain of the Covid break out. But right now, those of us who are fully vaccinated are pretty safe.

And by the way, the Fringe will be demanding that you either provide proof of vaccination or of a recent negative test in order to attend any of their live shows. We can expect that some new societal customs will develop, at least among the private sector, in this (we hope) post-covid period. This is not to say that the unvaccinated aren't at risk, but that is a different discussion for a different day.

And finally, Shakespeare by the Sea has one more production, which will be Loves Labors Lost.

End of an Era for the USWNT? A new use of an old pronoun in this sport

In what is the most popular sport in the world, dominated by Europe and South America on the men's side, the United States has dominated on the women's side. It's of course soccer, or as they call it in many parts of the world, football. Our dominance has been attributed to Title 9 in the Civil Rights Act, which offered a certain kind of equality to women. In the same era, soccer was encouraged by parents. We saw the development of the AYSO and the formation of teams at the high school level who would feed the developing collegiate ranks.

Out of this came some of the best female athletes in the world and a record which is unrivaled in the sport.

But it is also a tough and lonely place when you've been on top. This is a team that won two consecutive World Cups, defeating Japan and the Netherlands in the most recent cups. Up to this year, the U.S. team won fully half of all the World Cups and four Olympic titles.

But this year's Olympic games seemed like a replay of one of those old movies or stories (Mighty Casey Has Struck Out) with the first round loss by the U.S. to Sweden. Mind you, Sweden is no slouch as a team, but the Americans had set the standard and as one of our players put it, "We got our asses kicked." But by winning the next game and tying the third in the opening round, the U.S. got to the next stage where a loss knocks you out of the tournament.

They got through the quarterfinals by the slimmest of margins.

On to the semifinals against Canada, but in this Olympics, the Gold Medal was not to be. The Americans gave up a penalty goal to Canada late in the game and -- in spite of dominance in ball possession and in shots on goal -- they just couldn't get it into the net. An exultant Canadian team will go into the finals against Sweden, who beat Australia (also by a 1 -- 0 final score).

Critics are already going after the American coach. Meanwhile, if Canada were to pull an upset in the final, it would signify continuing dominance by North American teams.

And here is where the Olympic soccer story comes fully around to the above story about the Hollywood Fringe and its use of preferred pronouns. The Canadian women's team has a transgender player by the name of Quinn. As CNN described:

" History has also been made by Canada's Quinn as they have become the first transgender athlete to win an Olympic medal with at least silver now guaranteed for Priestman's team. Quinn was part of the bronze-winning Canadian side of 2016 before coming out in September of 2020."

So we have an example of the preferred pronoun being used -- in this case one person is described as "they." Semantic nitpickers will point out that in the above sentences, we have the one word "athlete" to indicate that the nouns are singular. Some analysts point out that this is more a limitation of modern English than anything else -- we simply don't have a pronoun to serve all these different uses in an unambiguous way. And that too is a discussion for another time, but we are clearly seeing a newfound attempt to defend the rights of the transgender community.

(Bob Gelfand writes on science, culture, and politics. He can be reached at [email protected])