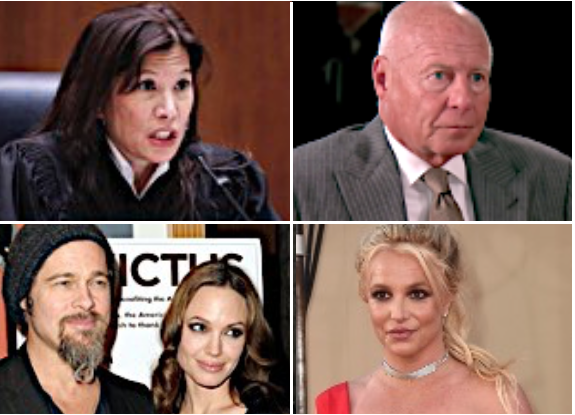 VIEW FROM HERE - Tani Gorre Cantil-Sakauye, the 28th Chief Justice of the California Supreme Court, does not deserve all the credit for California’s judiciary’s descent into a cesspool of corruption.

The process was well underway prior to Gov. Arnold Schwarzenegger’s nominating her on July 22, 2010.

From their outset, the California courts have immersed themselves in skullduggery, beginning with the land thefts from the Californios after the 1848 Treaty of Guadalupe-Hilgado had guaranteed the prior land grants under Spain and Mexico. The legal proceedings by which the Californios were swindled out of their lands established much of the corruption which characterizes today’s California courts. One of the main ways to steal the Californios’ land was to force them to undergo endless bogus legal challenges until they ran out of funds. As victims of our Family Courts learn, litigation seldom ends until the families run out of money for attorney fees and expensive child custody evaluators.

After World War II, California did have a respite from the corruption of the land thefts and the railroads’ rule with the appointment of Roger Traynor as a Supreme Court Justice in 1940 and as chief justice from 1964 through 1970 during which time the California Supreme Court became one of the most respected in the nation. Subsequently, Gov. Jerry Brown appointed Rose Bird as Chief Justice in 1977. In 1986 she lost the judicial retention election along with Justice Joseph Grodin and Justice Cruz Reynoso. Governor George Deukmejian then appointed his law partner Malcolm Lucas as Chief Justice touching off the era of never-ending judicial corruption which plagues us today.

One should not discount the influence which the reign of Manny Real, judge in the United States District Court for Central District of California from 1966 through 2018 (Chief Judge from 1982-1993), had in spurring on state court corruption. How the immoralities of the state court and the federal court systems interact, however, is beyond the ken of this article as is the obsequious pandering of Rep. Adam Schiff in allowing Judge Real to remain on the bench.

(1) Foley v. Interactive Data Corp., (1988) 47 Cal.3d 65, which held it was okay for executives to fire employees who objected to the hiring of an embezzler to help loot the corporation,

(3) Moncharsh v. Heily & Blase (1992) 3 Cal.4th 1, requiring courts to enforce binding arbitration awards which were wrong on their face and worked a substantial injustice. Soon thereafter Justice Lucas, author of the Moncharsh decision, retired to a lucrative career of being an arbitrator with his income fortified by his Moncharsh decision.

As Justice Joyce Kennard wrote in her Moncharsh dissent, “I will not agree to a decision inflicting upon this state's trial courts a duty to promote injustice by confirming arbitration awards they know to be manifestly wrong and substantially unjust.” Justice Kennard was fighting a losing battle. In January 2015, federal judge Alex Kozinski in the Baca case, where the prosecution used a lying jailhouse informant and the prosecutor took the stand and committed perjury, stated that the California courts had a “epidemic of misconduct.” The state’s appellate courts found no problem with prosecutors who suborned perjury and then committed perjury themselves. The California state courts had turned crimogenic. Judge Kozinski was later forced off the bench.

By the time Judge Kozinski’s 2015 comments in Baca, Tani Gorre Cantil-Sakauye had been chief justice for four years. That year, she let stand the decision that Cal Const. Art VI Sec 10 allowed judges to use their personal bigotries as the basis for their rulings. Hollywoodians Encouraging Logical Planning had argued that Judge John Torribio was excluding it from the multi-party case on the Hollywood Community Plan as its attorney was a troublemaker Jew “who would refuse Jesus Christ.” (As disclosed in previous articles, I was the miscreant Jewish attorney.) Judge Torribio never disputed the charges but instead signed an opinion, faxed to him from the office of Frederick Bennett III, that Cal. Const. Art VI Sec 10 gave him the right to exclude Jews and to alter evidence offered by Jews.  In 2021, the Chief Justice again let stand a case arising from the disbarment of Save Hollywood’s Jewish attorney based on Judge Torribio’s dislike of Jews. (Yes, Yours Truly again)  One suspects that my interference with judicial money laundering played a larger role than my religious-ethnic identification.

The important aspect of Chief Justice Cantil-Sakauye’s interpretation of the Art VI Sec 10 is that it reveals the crimogenic nature of the state’s judicial system – that is, judges and their friends may do whatever they wish without regard to facts or law. Three recent cases reek of the corruption: (1) Attorney Tom Girardi’s theft of millions of dollars with the cooperation of the judges and State Bar, (2) the abuse of Britney Spears and (3) Jolie-Pitt Divorce.

Tom Girardi Stole Millions of Dollars from His Clients

“Looking the other way” would be too mild to characterize the judges involved with Girardi. Girardi ran a far-flung operation of favors for judges with his special retreats and gifts, while the State Bar squelched all complaints of his wrongdoing. The State Bar is one of the three judicial institutions over which Chief Justice holds sway.

Britney Spears has been suffering abuse from the Los Angeles Probate-Conservatorship court since 2008. Britney’s experience is typical. Under the tutelage of the Chief Justice, the conservatorship court has written out the game plan for looting the estates of elders in Mozer v Augustine, Sept 2019, #B288162 assuring the thieves that they will never be held accountable. The Mozer Process: judges force persons with mental problems and elders into mediations where they are forced to sign mediation agreements which strip them of all their rights and property and then forbid them to ever mention what was done to them. The Mozer case is classic predatory behavior where the abuser then intimidates the victim into silence.

“The standard for (a judge’s) disqualification . . . is fundamentally an objective one. It represents a legislative judgment that due to the sensitivity of the question and inherent difficulties of proof as well as the importance of public confidence in the judicial system the issue is not limited to the existence of an actual bias. Rather, if a reasonable man would entertain doubts concerning the judge’s impartiality, disqualification is mandated. ‘To ensure that the proceedings appear to the public to be impartial and hence worthy of their confidence, the situation must be viewed through the eyes of the objective person.’” [Bold added]

Everything the appellate court wrote is a crock! None of those rules apply in the real world. They are merely BS for which Jolie and Pitt probably have paid hundreds of thousands of dollars in attorney fees. Once again, the rule for the entire California judicial system under Cal Cont Art VI Sec 10 is simple: a judge can do anything he/she wants. Watch as Jolie and Pitt are now suckered into paying hundreds of thousands of more dollars in attorney and private judging fees. Neither needed any disclosure to know what Ouderkirk was like; he had married them in France in 2014.

According to the Chief Justice, judges may have secret ex parte communications with the opposing attorneys; judges may exclude attorneys from sidebars; judges may alter the evidence, judges may reverse the testimony of a witness, invent new testimony, withhold transcripts, etc.  In two cases six years apart, Chief Justice Cantil-Sakauye has affirmed that Art VI Sec 10 allows judges to whatever they wish, (except step on the toes of more important judges.)

Being disbarred for complaining about anti-Jewish bigotry is mild to what has happened to thousands of minority defendants due to the prevailing ethos of Art VI Sec 10.  For decades, minority defendants have been coerced into plea deals since they know that a fair trial is a delusion in Los Angeles County. Ten of thousands of pages could not begin to mention all the injustices which the California judiciary has inflicted on Californians, not the least of which has been the mass destruction of poor people’s homes resulting in the homeless crisis.

While Chief Justice Cantil-Sakauye may not claim sole credit for turning the California judiciary into a haven for predators and bootlickers, she merits honorable mention for California’s decline into its moral abyss.

(Richard Lee Abrams has been an attorney, a realtor and community relations consultant as well as a CityWatch contributor. The views expressed herein are his own and do not necessarily reflect the views of CityWatch. You may email him at [email protected])