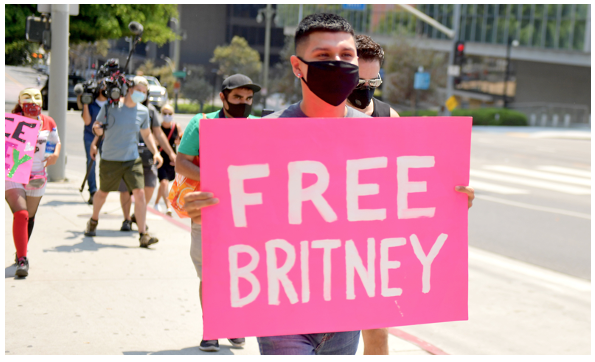 VIEW FROM HERE-California’s most secretive and most corrupt institution is its judiciary. Britney Spears is subject to a conservatorship under the Probate Department of Los Angeles County Superior Court.

The state court is corrupt, from its Chief Justice Tani Gorre Cantil-Sakauye at its tippy top down to the court clerks. Those who do not go along are expelled.

Things are so bad in California, that it is hard to say the conservatorship section is the worst since the criminal courts are infamous for railroading defendants with the use of lying jail house informants, for manufacturing evidence and for perjuring prosecutors. Anyone who threatens to expose corruption in the state court, such as former federal judge Alex Kozinski, can be kicked out.

The Corruption Behind the Conservatorship of Britney Spears

There are individuals who need a conservatorship of their finances (“estate”) and of their person.  That need is an opportunity for the court either to help the person or to rob them blind. California has chosen the second track. Since 2008, Britney has been subjected to a conservatorship of her estate and of her person. The issue whether Britney needs a conservator is separate and distinct from the question whether the court is draining Britney’s assets to benefit anyone except Britney.

Back in 2008, when Judge Reva Goetz was on the bench, she was instrumental in Britney’s case. Perhaps, the clearest example how LA conservatorships function is found eleven years later in the Mozer v Augustine (2019 No. B288162.) Goetz played the pivotal role as the mediator in Mozer. This case is relevant to Britney as it demonstrates the increasing sophistication of the corruption in conservatorships. While judges have immunity for their criminal actions, mediators and attorneys lacked such immunity -- until the Mozer case, which should be called the playbook for “How to Steal with Impunity.”

The Mozer Case Allows Attorneys to Rob Their Clients of Everything

In 2015, ex-judge Reva Goetz presided over a mediation of the $60 million estate of Mozer’s husband. Right after the mediation, the widow Mozer discovered that both mediator Reva Goetz and her own attorney had materially deceived her during the mediation so that she gave up substantially all her rights. The widow Mozer asserted that as experts in California community property law, both Reva Goetz and Mozer’s own attorney knew that the post-nuptial agreement between Mozer and her husband was valid, but they told her otherwise.

People naively believe they can reply on the advice of their own attorneys. While that may have been true at one time in California, today such reliance is foolhardy. Attorneys learn to never get between the judge and the loot. The unwritten rule has become “Go Along to Get Along.” If an attorney offers more than a perfunctory objection to the court’s robbing his client, he can expect to be summarily dismissed and his legal practice trashed.

One might think that Mozer could have sued her own attorney for fraud and breach of fiduciary duties. The Mozer case makes that impossible when the fraud occurs in a mediation. When Mozer tried to have the 2015 settlement agreement set aside, the court ruled that Evidence Code, § 1119 (a)-(e) and §1127 and Cassel v. Superior Court (2011) 51 Cal.4th 113, 123 made any and all statements during a mediation are confidential and inadmissible in any court. The Mozer case ignores the fact that California law holds that fraud vitiates (kills) any agreement. Civil Code, §§ 1709, 1710, 1565-1590.

The Sweet Scam of Judicial Mediation

The court orders elderly persons into a mediation, telling them that they and their attorneys will meet in the neutral facilities of some Alternative Dispute Resolution Company so that everyone may work out their differences. Reva Goetz now is with JAMS in Los Angeles. Since mediation is an informal setting and their own attorney is present, people feel secure in attending. As Mozer related, mediator Goetz and the attorneys met in a separate room without her and then lied to her about the significance of the settlement agreement. Her attorney did not warn her that after signing, there was no way she could later challenge its terms. The Widow Mozer also did not know she did not have to sign that night. It is not unusual to run the mediations into the evening hours, exhausting the elders so they will sign anything just to get out and have a bite to eat and rest.

Probate Judge Paul Suzuki succinctly summed up the elders’ position with fraudulently obtained mediation settlement agreements, “If she signed it, that’s it.” Mediations came to replace binding arbitrations in large measure due to the case of Moncharsh v. Heily & Blase (1992) 3 Cal.4th 1, which held that the courts had to enforce binding arbitration agreements which were wrong on their face and worked a substantial hardship on the victims. Even Monchrash, however, allowed a fraudulently obtained mediation award to be set aside. In a Los Angeles conservatorship mediation, no matter how much the mediator cheats the elder, no matter how ruthlessly the elder’s own attorney sells her out, the agreement to strip the elder of all her wealth may not be challenged.

These mediation agreements can bind a conservatee such as Britney to her attorney since there is no way to show how he may have sold her out for his own personal benefit. Britney’s attorney, Samuel D. Ingham III, who has allegedly made about $3 million in attorney fees, may not be so fortunate. Back in 2008, Britney apparently never signed a confidential mediation agreement. They relied on Judge Goetz to ram through everything.

Do not be surprised when the judge sends Britney’s objections to her attorney and her father’s behavior to mediation. From that point on, Britney’s attorney, her father, the judge, etc., can divvy up Britney’s assets however they wish and there will be absolutely nothing she can do. Why? Confidentiality. The Mozer confidentiality rule protects criminal conspiracies which steal conservatees’ wealth. And you wondered why they have armed guards at the courthouse entrances.