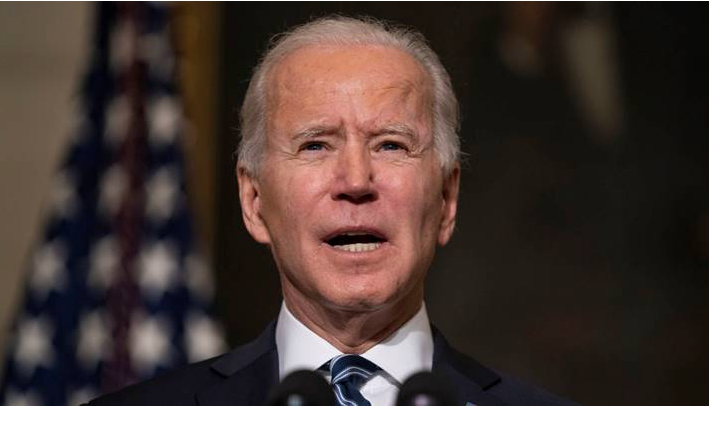 VIEW FROM HERE-In the last campaign debate, Joe Biden repudiated the divisive Dem Identity Politics which had brought about Charlottesville and at the same time he rejected Trump’s message of group hatreds by saying two words, “Your family.”

The full quote is "This is not about my family or his family," Biden argued, directly addressing the camera. "It's about your family, the American people."

In fighting the pandemic, Joe Biden has been centrist and he has not dwelled on the horrors of the prior Administration which had caused America to the insanely divisive in fighting the Covid-19 Pandemic.  Rather, Biden focused on helping all Americans survive.  As of May 16, 2021, the US had 47% vaxed with one dose and 37% fully vaxed.  Joe Biden, however, had an objective more vital than fighting the pandemic. He was quietly demonstrating to America that when we work together in cooperation, we can succeed.  He had set July 4th to celebrate the end of the pandemic, when we could remove the masks and reaffirm how individual persons can actually make America great by thinking not only about themselves but about others. To reach that goal, we had to continue to work together as one nation.  Nothing unites a people than fighting a common enemy in unison.  Remember how Biden had set the 100 Million vaxed in his first 100 days days and then had 200 vaxed?  That is how Biden functions: he sets a goal and then surpasses it.

As more people became vaxed, millions of people continued to wear masks, not only to protect themselves but also as a sign of social support. No one knew who been fulled vaxed.  All people saw was everyone wearing a mask.  Those of us who were fully vaxed realized that the risk to ourselves of going to Target without a mast was small (less than 5%). We also know that 47% vaxed nation was short of herd immunity. (As Robert Frost said, “Miles to go before I sleep.”)  We also knew that resistence to the vaccine was waning.  We had a postive social dynamic in saying that if we reach herd immunity by July 4th, we can safely discard the masks, discard social distancing, and we can associate with each other in schools and at work.  The common name is for this social interaction “Peer Pressure.”  Just as peer pressure can cause teenagers to do dumb things, it can cause adults to do smart things.

While authorities’ telling people what to do has limited effectiveness in a divided nation, peer pressure is very effective.  Joe Biden was making significant advance in having peer pressure move the nation closer to herd immunity.  More crucially, Biden was getting the country to pull in the same direction.  The dwindling number of anti-maskers and anti-vaxers were being seen as anti-social, as endangering their own communities.  Anti-maskers were less anti-government rebel, but more about acting like some toddler crying“No.”

Without warning, the CDC announced that fully vaxed people need not wear masks indoors!  Now, the anti-maskers and anti-vaxers are free to rampage through the stores spreading the virus.  Many states still had masks mandates and the CDC destroyed basis for those rules.  Instead of a nation which was steadily moving ahead in increasing unity towards July 4th with a huge vax rate and very little viral spread, we now have total confusion.  The GOP anti-vaxers will now launch political attacks on all Dem state administration such as California which had been so successful in getting the virus under control.  Virtually over night, the CDC made the GOP anti-maskers into heroes.  What is Target to do when one hundred people show up with no masks, and then in a few days almost no one wears a mask?

The Entire Social Dynamic Will Shift

The CDC has flipped the meaning of a mask.  Now a mask will mean: “Beware. I am unvaxed and dangerous.”   Social psychologists know that people will not wear a New Scatlet Letter in the form of a mask. CDC Director Rochelle Lewinsky’s claim that each person will have to decide for themselves is the irresponsible GOP approach.  It is scientific idiocy.  It was absurd when Trump promoted it and it is nonsense today.  Lewinsky’s statement undercuts the core concept of “Public Health.”  There are times when collective action is crucial and Lewinsky’s destroying the growing public consensus to wear masks is unforgivable.

By resign, I mean Biden should fire Lewinsky for grossly inconceivable incompetence, if not intentional sabotage. Worse than the needless deaths, Lewinsky has killed the heart and soul of the Biden Administration – that cooperative centrist policies will make America great again.

If July 4th had been the day when the entire nation would be so close to herd immunity that each of use could celebrate the liberty from the virus, we would have gone a long way to combating our worse enemy – Divisiveness.