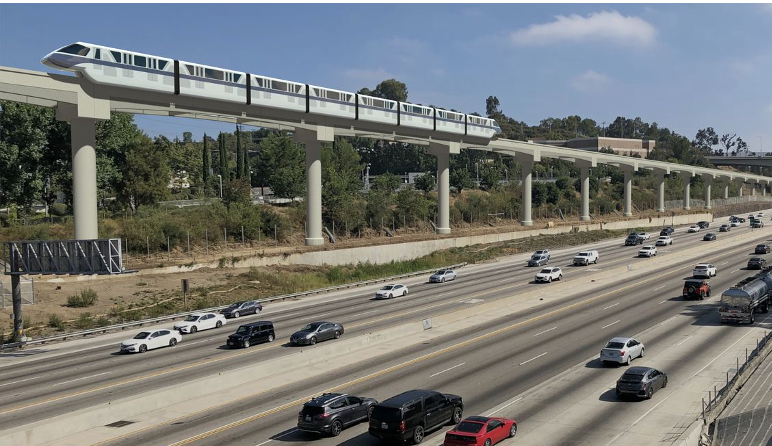 TRANSIT TALK-Metro is undergoing studies for a mass transit system for the Sepulveda Pass.

The following plan overview is taken from LA Metro:

Megaproject planned to connect San Fernando Valley with the Westside via a high-speed, high-capacity transit line.

The LA Metro Board of Directors this week approved contracts with two private sector teams for predevelopment work on the Sepulveda Transit Corridor Project using a first-of-its-kind public-private model.

This megaproject is planned to connect the San Fernando Valley with the Westside and eventually LAX via a high-speed, high capacity transit line, connecting two busy destinations for residents and workers. The primary travel option for most people currently is driving the I-405 freeway through the Sepulveda Pass, a choke point that is one of the nation’s most congested roadways.

Sepulveda Transit Corridor Partners – Bechtel was awarded a $69.9 million contract to further develop its proposed heavy rail transit solution concept. More than 60% of the partner team’s proposed heavy rail concept would travel underground, with the remainder of the line traveling primarily in an aerial section. A Valley-to-Westside trip would take just under 20 minutes according to the team’s proposal. The team’s estimated costs for constructing this proposed solution is $10.8 billion.

LA SkyRail Express was awarded a $63.6 million contract to further develop its proposed monorail concept that would be an aerial alignment primarily within the I-405 right-of-way between the Valley and Westside. Proposed travel times via monorail are estimated at 24 minutes. The LA SkyRail Express team’s baseline proposal cost for building the monorail concept is $6.1 billion.

With the Board's action today, we have reached a significant milestone in our efforts to envision, design, and develop the United States’ first predevelopment agreement specifically for a public transit initiative,” Metro CEO Phillip A. Washington said in a statement. “As we work diligently to create a world-class transportation system here in the Los Angeles region, we will also be creating a new market for infrastructure innovation that can potentially help us build the most challenging project Metro will ever tackle.”

Now that PDA contracts have been approved, LA Metro plans to begin the environmental review process this fall, where concept designs for these and other alternatives will be advanced and/or refined through extensive, ongoing public feedback and technical investigation and analysis.”

This is dated March 26, 2021. A portion of the heavy rail project would be underground, and there is no mention of the monorail being built underground. Yet, less than a month later, the latest monorail proposal for the Sepulveda Pass has an underground alignment.

From Metro, The Source

“Here are five route alternatives that will be studied for Sepulveda Transit Corridor.”

Metro staff this month is releasing five alternatives to be studied as part of the Sepulveda Transit Corridor project’s environmental review process. The five are:

Let’s back up a step for those new to the project.

As many of you already know, the project will be a high-speed, high-capacity heavy rail line or monorail that will run between the Van Nuys Metrolink Station and the E Line (Expo)on Los Angeles’ Westside. The line will be the long-awaited alternative to the perpetually congested 405 freeway between the San Fernando Valley and West LA area and will also offer access to the G Line (Orange), Ventura Boulevard, the UCLA campus, and the Purple (D Line) Extension.

In March, the Metro Board awarded contracts to a pair of firms to do pre-development (PDA) work on two different potential types of transit (see this earlier Source post for more details) on the project.

LA SkyRail Express is developing its proposed monorail concept that would follow the 405 freeway and take 24 minutes to travel between the Van Nuys Metrolink station and the E Line.”

How did this change get put into the project less than a month after the earlier projections? Who is behind these sudden changes? I cannot remember any other Metro rail project which also took account a monorail, and with such sudden and dramatic changes as the Sepulveda Pass.

Who is behind this? Metro is a public agency, and the need for transparency is not being met. Who – whether it be an individual, a public agency, or private enterprise -- has such power to make what seems to be this last-minute change?

And would the touted cheaper costs of the monorail hold up once the costs of tunneling are incorporated?

We deserve to know.

Moreover, in researching monorails throughout the world, most are short lines serving amusement parks, zoos, shopping center and tourists. The Sepulveda Pass transit project is a tremendously critical line to serve the general public with very high ridership, not just as a novelty line.

Monorail supporters list the Tokyo-Haneda Monorail as the holy grail of profitable monorails, and not dependent upon public subsidizes. A closer look clarifies the situation.

From the Tokyo Review:

Lessons from Railway Privatization in Japan

“Japanese National Railways was privatized in 1987 and broken into six regional rail companies and one freight company. Currently, five of those companies – JR East, JR Central, JR West, JR Kyushu, and JR Freight – are in the black. JR East, West, Central, and Kyushu are publicly traded.

First, privatization allowed the JRs to operate commercial and real estate businesses. Today, non-transportation revenues make up roughly a third of JR East’s revenues, and nearly 60% at JR Kyushu. JR East operates shopping centers, restaurants, and hotels. Other large rail providers in the United States, United Kingdom, and France manage large real estate portfolios but for the most part do not directly operate businesses in the buildings they own.

Third, the JR companies have had to become extremely efficient on their most profitable lines (Shinkansen) due to competition from air travel. JR Central estimates that a Tokyo-Osaka trip takes 2 hours and 22 minutes on the Shinkansen, and 2 hours and 40 minutes on a plane, including travel time to the airport.”

So Japan Railway relies upon the income from the Shinkansen-High Speed Bullet Trains- and other lines to subsidize the monorail. This business model is not feasible with Metro.

Then there is the matter of fares comparing the Tokyo Monorail and Subway. And in Tokyo, the monorail is not a stand-alone as it would be for the Sepulveda Pass, but its basic route is complimented by two heavy rail routes.

In Tokyo, the monorail costs more to ride.

“Should you decided to activate your JR Pass later on, please be aware that you should pay for the ticket with prices depending on your departure and arrival stations. Fares from Haneda Airport Terminals to Hamamatsucho Station are 490 ¥ (adult) / 250 ¥ (Child).”  (490 Yen is $4.48)

The Tokyo Monorail makes money because it charges a lot more for fare.

This concept could not work for Metro. It would wrong to charge transit riders more to ride a monorail compared to the rest of the Metro rail and bus services. It would be punishing as well and would exclude the large number of transit riders of lower income.

The current Metro fares and passes:

How much does it cost?

Forcing a monorail through subversion and secrecy is not right. This is not the time for innovation, a monorail supporters’ theme, but to build a heavy rail subway through the pass which would match the other rolling stock of Metro’s rail lines, which is much more efficient in funding and time.

(Matthew Hetz is a Los Angeles native. He is a transit rider and advocate, a composer, music instructor, and former member and president and executive director of the Culver City Symphony Orchestra. He is a CityWatch contributor.) Rendering: LA Metro. Edited for CityWatch by Linda Abrams.