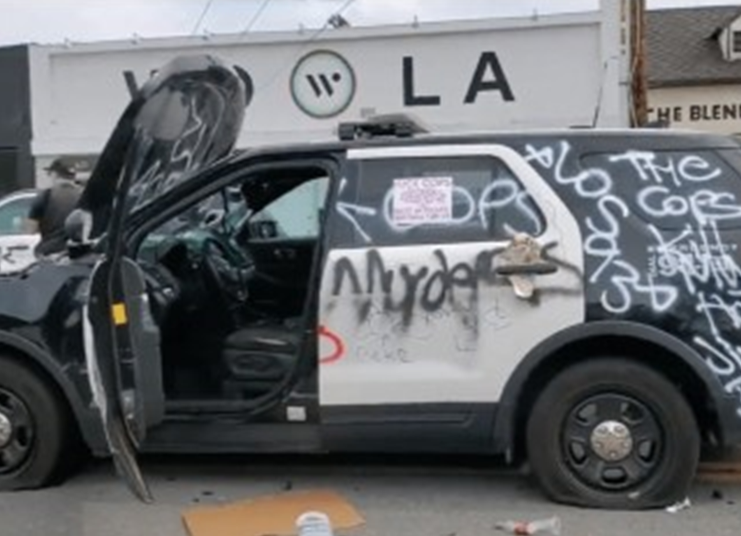 ‘WHEN DOES IT CHANGE?’--The just-released Chaleff report on the Los Angeles Police Department’s actions during the protests following the George Floyd murder in May 2020 find lack of training and preparedness as the culprit for LAPD’s failures-

–failures that date back to the Democratic Convention demonstration in 2000.

Some progressives see this as a cover-up for LAPD historical harassment, violence and arrests. It has been ongoing for decades. Carol Sobel, a prominent civil liberties attorney known for suing the city on behalf of the homeless, is also representing people arrested  and allegedly abused by the police during the George Floyd protests last May. Sobel said that the report “underscores the claims we made in our lawsuits.

“It’s really inexplicable that it happens over and over,” Sobel said. “We’ve gone through this show many times. When does it change?”

The Los Angeles City Council assigned a task force composed of former police department commanders and led by a former president of the LA Police Commission and retired LAPD commander, Gerald Chaleff. Activists have questioned why an independent report on the LAPD was prepared by veteran LAPD officers?”

More than 4,000 demonstrators were arrested and hundreds injured by police projectiles during the summer protests. Multiple interviews in the media reflect individuals who were badly wounded after being shot with 40 mm hard foam/rubber projectiles at close range without them representing any threat to officers. One was shot in the head while standing with his arms in the air after backing away from advancing officers.

When the arrestees were finally released, they were dropped off far from where they were arrested in late hours past the city curfew.

Melina Abdullah, cofounder of Black Lives Matter-LA said the report, “addressed some of the wrongs,  but did not critique the notion that LAPD should be putting down righteous protests in the first place.”

The report acknowledges “mistakes that appeared to repeat problems that surfaced in past protests; citing Democratic National Committee convention in 2000, MacArthur Park 2007 attack on immigrants’ rights protesters, the Occupy LA 2011 encampment, protests sparked by the killing of Michael Brown in Ferguson, Missouri (2014), and one could add several other demonstrations. The report acknowledges that the city paid out over $3 million in lawsuit settlements for false arrest problems.

The National Lawyers Guild is spearheading a class action lawsuit against the city for its arrests and constitutional rights violations during the protests against killings by cops. Also, the National Lawyers Guild’s membership passed a resolution supporting police abolition following its #Law4thePeople Convention last fall, acknowledging that the institution of policing is incompatible with the Guild’s mission to use law in defense of human rights and ecosystems over property interests.

during the protests, including : planning, command and control, public order policing, less lethal tools (such as rubber and foam projectiles), mass arrests, preparedness and training and wellness.

The police complained that they were understaffed and poorly equipped, yet they apparently had enough beanbags, rubber bullets, tear gas, batons, shields and gas masks, to carry out sustained attacks on the media representatives covering the protest as well as the demonstrators.

It further acknowledges that people were indeed illegally detained for “exceedingly long periods of time.” This further includes failure to release protesters for curfew violations, a misdemeanor that does allow for arrest, and “failure to provide access to bathroom facilities and water” while hundreds of protestors were detained.

The report further says that interviewees were surprised at the violence that occurred in the afternoon and evening hours at some protests and that they lacked intelligence. By that they mean they did not get accurate information from the teams of undercover cops, whom they call “shadow teams.”

During the George Floyd Minneapolis protests activists accused undercover police officers engaging in vandalism and inciting violence during the protests last spring. Minneapolis police have denied the accusation. Right-wing agitators have been documented carrying out such tactics, the most infamous of which was dubbed the “Umbrella Man.”

The reports review team cited poor training, command and control and planning for the LAPD’s failures during the protest last spring.

In response to the report, Mayor Eric Garcetti is quoted as saying he was “Looking forward to working with the police commission, the city Council, LAPD and community stakeholders in implementing improvements suggested in this report and the two reports coming shortly.”

Furthermore, while the report affirms “a duty of the police is to protect free speech and First Amendment rights” the report says nothing of the violation of the protester’s civil liberties, nor the multiple physical assaults on members of the media even after identifying themselves. In fact, media representatives have said that they were consciously targeted.

Former LAPD officer and current city councilmember, Joe Buscaino, quoted in the Times with a different approach, saying “We need to be thoughtful about how we process this information and how we implement changes.”

(Mark Friedman is a Socialist, a labor activist, and an educator who has worked with teachers, students, ship's crew to promote marine biology with lessons and hands-on inquiry/investigations aligned to California state biology standards, NGSS & Common Core. Friedman can be reached at Random Lengths News.)