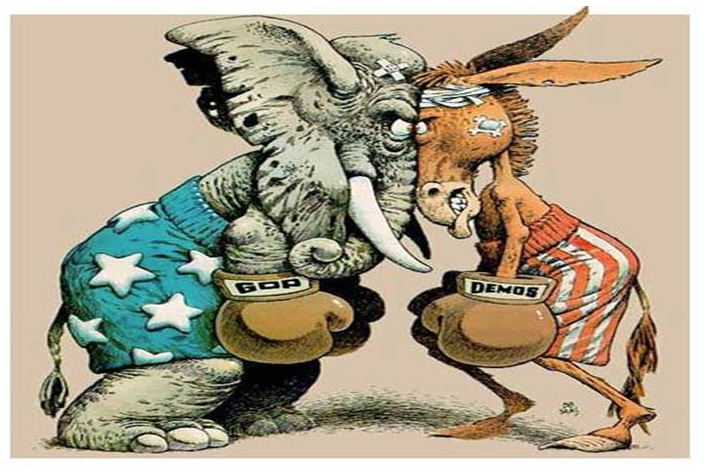 The break-ups of the Greek empire, the Roman empire, the British empire, and all the other empires have similarities and differences.  The common element is that internal strife caused stagnation, while others grew stronger through cooperation.

The two greatest threats to our national survival are the Democrat Party and the Republic Party. Both parties polarize every situation.  The monetization of hate is more dangerous than Covid-19 but combating that public health threat has been used to divide Americans.

By substituting “Pursuit of Happiness” for “Property,” The Declaration of Independence was written so as to end the most pernicious form of group rights, slavery.  At the same time, the founding fathers had to combat religious bigotry which wanted to exclude different religious groups or impose serious civic penalties, e.g. not eligible to hold public office unless one were Christian.  Later, Irish were not allowed into many businesses and Italians were summed up with the term WOP meaning “With Out Passport.” German Jews disliked the arrival of Eastern European Jews.  The nation’s prevailing ethos, however, became inscribed at the base of the Statue of Liberty with Emma Lazarus’ 1883 poem.

"Give me your tired, your poor,

The wretched refuse of your teeming shore.

Send these, the homeless, tempest-tossed to me,

I lift my lamp beside the golden door!"

Lazarus’ poem recapitulated our founding motto, “From Many, One.” In other words, we are one nation which derives from many different peoples, the “huddled masses yearning to breathe free.”  One need not be a Latin scholar to recognize the root word “Plural” in “Pluribus” meaning “many” and Unum is the core of “unity,” “union,” and “united.”

The Declaration provided that individuals had inalienable rights; groups had no rights. One purpose of the US Constitution was to secure the “Blessings of Liberty,” which was an individual inalienable right inherent in each human being without regard to any group to which he/she might belong. The Constitution also was “to promote the general Welfare.”  The general welfare did not exclude any individual because he/she belonged to some group, e.g. Roman Catholic, Chinese, Gay.

Power Mongers Have Monetized Hate for Their Own Profit

When The Declaration set forth the basic values of the nation, the signers knew that it would take a long, long time to actualize those values, The US Constitution established a framework by which everyone could “breathe free.”  However, people are not angels and the monetization of hate by both political parties has brought us to a second civil war.

The Democrats Have Become the Greatest Monetizers of Divisive Hate

The Democrats had to work harder to become financial beneficiaries of divisive politics because for decades the Democrats had taken in the homeless, tempest-tossed who were yearning to be free.  The Dems were the Melting Pot Party when the GOP still had the John Birch Society.

A Terrible Seed of Divisive Hate Was Legalized in 1954

When the legal cases leading up to Brown v. Board of Education, 347 U.S. 483 (1954) are discussed, PC shuns Associate Justice John Marshall Harlan’s dissent in Plessy v. Ferguson 163 U.S. 537 (1896) which stated that segregation was unconstitutional as a deprivation of individual liberty.  Rather, everyone rallies around the notion of Group Rights and segregation in public school was unconstitutional because a sociological experiment showed that Black children preferred light skinned dolls over dark skinned dollars.  Also, Black educational achievement was lower and states always spent less money on facilities for Blacks than on education for whites. The court made clear that Blacks had no inherent right to “breathe free.” Segregation was unconstitutional only because Blacks did not do as well as Whites. (The defect was not with the Clark’s experiment, but with having the law based sociological studies while denying Blacks the inalienable and constitutional right of liberty.)

The evil which the Brown case unleashed upon the nation was that a Black person did not enjoy the inalienable right of liberty and discrimination required a showing that a group had worse outcomes.  This ruling immediately gave rise to the politics of Victimization where money would flow into a community to the extent it proved it was doing poorly.  Generations of Blacks were taught that they were first and foremost victims.  While there is no denial that the much of America’s power structure treated Blacks as subhuman, it required a racist belief in the inability of Blacks to overcome – right when Blacks were leading the most successful non-violent civil rights movement in our history.  Martin Luther King’s “I Have a Dream Speech” ended with “Free at last. Free at last. Thank God Almighty, we are free at last.”  He did not say “Equal at last.”  Nor did the Hebrews upon departing Egypt rejoice in equality. Passover is a freedom holiday, not an equality holiday.

When your guidepost becomes whether one group is equal to another group, then one has to define the groups.  Whites and Blacks are products of our need to measure Whites against Blacks rather than treat each individual as a valuable human being. The highest and best group is always Whites. If another group is not doing as good as Whites, then there must be discrimination. No other explanation will be allowed.

With the advent of the Dem Identity Politics, which parallels the GOP White is Right political agenda, hundreds of millions of dollars flow into the Dem coffers.  Likewise, the GOP capitalizes up the threats of Dem leaders like Nancy Pelosi who propose to do in the non-Wokers Whites, whom Hillary called the “Deplorables.” As soon as the minorities are the majority of voters, the Deplorable Whites are toast.  Then, Dems are all surprised that GOP is suppressing minority voters.  Of course, the GOP response is hideous racism. They have ignored George Bush’s advice not to become the White Race party.

The GOP, however, raises hundreds of millions of dollars with their anti-minority racism which stimulates more “counter-cash” to flow into the Dem bank accounts.   While the GOP party and Dem Party are stuffing billions of dollars into their pockets, the nation has entered another civil war. January 6th was our Fort Sumter.

Our national motto of “From Many into One” is becoming “From one nation into many warring factions so politicos can raise more cash.”  The present two-party system is the death of us.