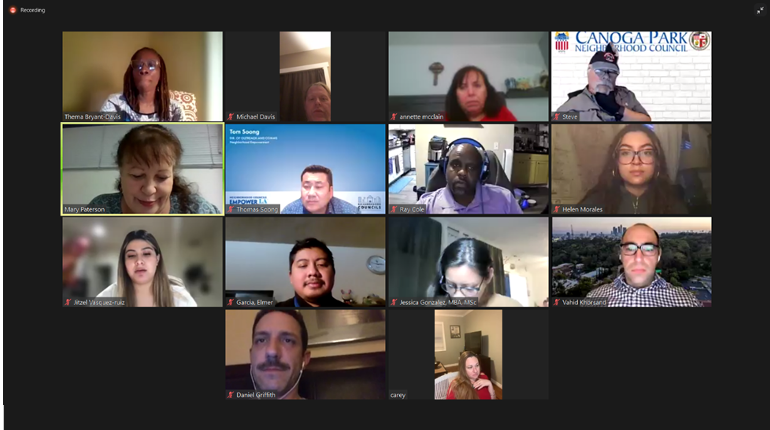 WHO’S IN CHARGE? On Wednesday, March 24, 2021, the Canoga Park Neighborhood Council (CPNC) held their regularly scheduled Board meeting via the ZOOM platform. On their agenda:

Would there still be an Election on May 4th? Of course, the response was no.

For those who are not familiar with how a Neighborhood Council works, usually the discussions with the City Clerk, the City Attorney’s office, and the EmpowerLA staff is between a Board President and those offices.

When I saw the agenda above for last night’s CPNC Board meeting, I began to question if this Board understood how this meeting should be run to the best of my understanding.

The Seating of the Board members:

This is the CPNC roster from the EmpowerLA website for the Canoga Park Neighborhood Council on March 23, 2021: 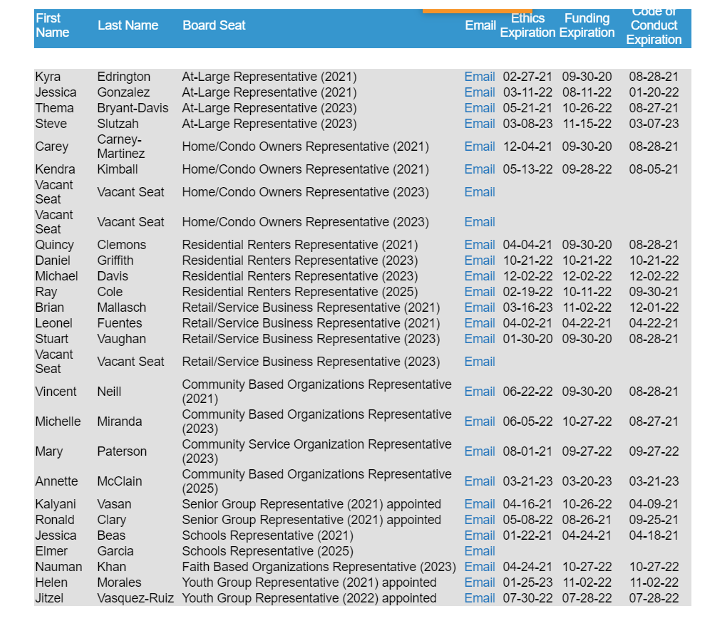 I do not know who posted the new Board members to this roster, but they should have updated the terms of three Board members listed whose terms ended in 2021, and who were seated at the March 24, 2021 Board meeting for another term.

Based on other Boards who have held elections, I have observed that someone from the City usually presides over the seating of the new Board. What that meant to me under the existing ZOOM platform, would be that old Board members who chose not to run again would not be on screen, and that only those who had the 2022, 2023, or 2025 terms would be on screen and should be sworn in by someone from the City as the first item of the evening.

And that is what did occur – the Department of Neighborhood Empowerment (DONE) or EmpowerLA staff were present at this meeting to read the Oath of Office to the New Board, and the New Board was asked to repeat the Oath of Office simultaneously with each other. To me, this is a new Board – a new term for everyone on the Board – this is the 2021 Election Season for this complete Board.

Selection of Officers of the Board:

This is what I really do not understand. Whenever I have been to a Board after an Election, after the Board members were seated, the City Staff aka: DONE would oversee the Election of New Officers of the Board. This is where I truly see confusion on this issue.

It was stated by EmpowerLA staff that according to the Bylaws of the CPNC, that their terms for their officers are one-year terms. This is the link to the CPNC Bylaws:

To me, since the Neighborhood Council had essentially held an election, and that the City Clerk had certified the candidates of this election, then this was the first Board meeting after that election. If the Board were to be seated, to me the new Board would elect new officers.

I believe that it was ASSUMED by EmpowerLA that there was a full Executive Committee to run the CPNC Board according to their Bylaws until sometime in the future when one-year terms were up in June.

After seating the new Board, the President moved forward on the agenda where there were Motions to appoint members of the Board – some of whom who had not run, and others who are appointed per their Bylaws to the Board.

This meeting was scheduled to begin at 7:00 pm with a planned presentation at 8:00 pm. According to my notes, at 8:40 pm, the Board President stated that there would be no discussion of the “MER”, Reimbursements, or donations to non-profits. She stated that she was going to “Table these three items” because, according to my notes – they were “in between Treasurers”.

She stated that there would be a “Special Meeting for these items”.