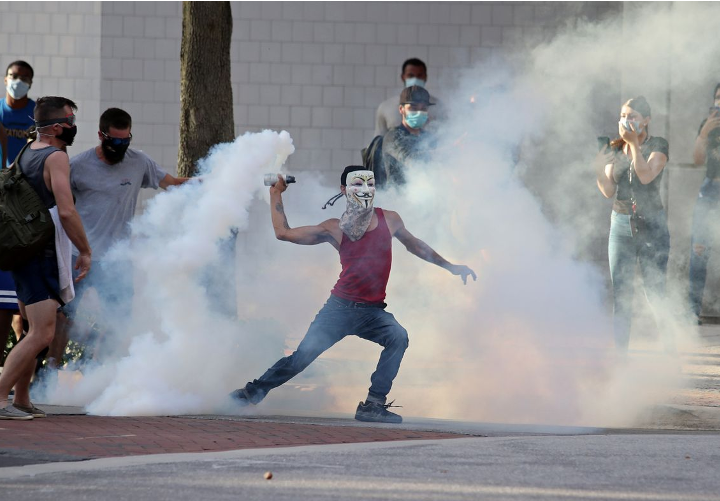 MY TURN--Fund raisers on the Right and on the Left know that the best way to raise vast sums of money is to claim an existential threat to their base.

An even better way is to pose an existential threat to the other side’s base and then capitalize on their reaction.  Humanity has had its racists since before the Big Bang (hyperbole), but their danger to the Republic has varied over time. After WW II, Left wing anti-Semitism diminished in the West but is still strong in the Russia (nee Soviet Union). As the wealthy seized an increasing share of the nation’s productivity, many on the Right felt that some type of unseen force was working against them.  Primed by Fundamental Christianity’s proclivity to scapegoat non-believers, neo-Nazis and similar folk were primed to fall for any mythology which explained their declining socio-economic standing.

As the Congressional Research Reports have explained, the Alt Right may be divided into two groups: (1) The ideological leadership which does not directly participate in violence (The Ideologues), and (2) foot soldiers who engage in violence, criminality and terrorism (The Activists). Steve Bannon will spawn racist conspiracies but he himself will not be physically attacking minorities.  The personalities of the Ideologues and the Activists differ. The Ideologues like Steve Bannon and Stephen Miller see themselves as superior to the ramble Activists who carry out the violence.  The Ideologues are primarily concerned with control and wealth, while the Activists perceive an existential threat which must be combated “by all means necessary.”

As they lose ground financially and socially, the Activists seek simplistic and often irrational answers to their problems. White nationalism and White supremacy bolstered by fundamental Christianity provide a theory to explain why life has become so much harder.  It’s the minorities.  In order to feel better, they identify with a group in which their membership is guaranteed: race and religion.

As Unions declined, the wealth of middle and lower class Whites, who were dependent on Unions, shrank. At the same time, Affirmative Action was placing Blacks and Hispanics into schools and jobs.  The Whites saw themselves as losers in this new system.  When one realizes how nepotism, political patronage, and Cronyism had played such a huge role in lower and middle class Whites’ obtaining employment, their belief that Affirmative Action was disenfranchising them was not unreasonable; it was what they had always done to minorities.

When a group feels that it is being socially short-changed, some gravitate to the politics of grievance, where their group identification with similarly disaffected people gives meaning to their lives.  For decades, mostly the less mentally stable fringe were peeled off by the neo-nazi’s (small “n” nazis as opposed genocidal Nazis) and by isolated KKK groups.

The GOP capitalized upon the White resentment with the Silent Majority which became the Moral Majority and then the Fundamentalist Christians dominated the right wing of the GOP.  Fox News and GOP candidates raised huge donations from their War on Christmas charade.  It elevated Bill O’Reilly’s ratings each year and filled the GOP coffers. White Christians claimed that they were the most persecuted group!  Since Whites were still sitting on the top of the economic ladder, the politicos had to manufacture a false threat.

As income inequality grew, Whites were fed more propaganda about how Jews, Blacks and Gays were destroying White culture and driving them into poverty.  The radical right, now Alt Right, had been violently terrorist since the April 19, 1965 when Timothy McVeigh blew up the Alfred P. Murrah Federal Building in Oklahoma City killing 168 people and injuring over 680 people.  That violence had been precedent by Ruby Ridge in 1992 and by Waco massacre on April 19, 1993.  McVeigh’s belief that Ruby Ridge and Waco were the products of the US government violence is reasonable. McVeigh’s bombing in retaliation made clear that the Alt Right was a significant domestic danger.  McVeigh was a supporter of White power groups like the National Alliance.

“ . . . White supremacists believe in racial separation and that society discriminates against them. To them, Whites have lost “ground to other groups and ... extreme measures are required to reverse the trend.”  All of this has been encapsulated in a slogan known as the “Fourteen Words”: “We must secure the existence of our race and a future for White children.”  2013 Report  p 16

How the Dems Increased the Fears of White Supremacists

The Dem Party had a choice after Ruby Ridge, Waco, and McVeigh.  Do they embrace traditional values of inalienable rights such as Life, Liberty and the pursuit of Happiness so that everyone feels welcome or do they throw their lot with Identity Politics to create a coalition of aggrieved minorities?   Demographically, the nation would eventually be majority minority.  Now was the time to lock the GOP into a shrinking base by further dividing the GOP from the minorities.  As the 2013 and 2017 Congressional Reports had warned Nancy Pelosi and other Dems, White terrorism was fueled by the belief that society discriminated against them and they felt an existential threat within their own country.

Thus, more alienation of the Right would lead to more right-wing violence, which would benefit the Dems fundraising as nothing raises money like fear of violence.   The Left found its marginalization of the Right as smart politics, i.e. planning ahead to when the minorities would be the majority of the voters.

The best way to make minorities afraid is to gin up the violent White Supremacist by further threatening them and blaming them for other people’s woes.  The Doctrine of White Entitlement was ideal for this ideological war as it blamed all Whites for all Blacks problems. More infuriatingly, it said that whatever Whites had they owed to Blacks.  The real purpose of White Entitlement was not to improve the condition of minorities but to exacerbate the violence potential on the Right. The message to Whites was that by virtue of White skin, Whites had achieved a placed in society which they did not merit with the logical solution being slavery reparations.  White Entitlement Theory enraged the Alt Right to violence.

After the Crash of 2008, the Whites in the Rust Belt Suffered Terribly

During the Obama Administration, their jobs were shipped overseas but the benefits went to the owners, and unemployment soared as did home foreclosures.  The cost of a college became out of reach and the Opioid epidemic sent a lot of young men to prison.  When bankruptcies were common among middle class Whites, the Obama Administration gave $15 Trillion to domestic and foreign bankers.  Increasingly, the Dems were telling its minority and college educated Whites base that the prejudiced Whites with their guns and religion were to blame.  This canard was aimed directly at White identity, making a mockery of their suffering.  (The attitude of college educated Whites used to be summed up in the term “Poor White Trash.”)

As If the term Poor White Trash was Not Demeaning Enough

On September 8 and 9, 2016, Hillary Clinton referred to Trump’s supporters falling into two baskets, one was the basket of deplorables whom she labeled as racist, sexist, homophobic, xenophobic, Islamophobic.   Clinton did not say that Trump was any of those things; she attacked White Americans, a class of people who had formerly been the bulwark of Dem constituency.  A few weeks later the Deplorables turned out in droves in the swing states giving Trump the electoral college vote, but not the popular vote.  Hillary blamed Russia.

One would think the Dems would immediately stop calling Americans the D-word. Did anyone miss its parallel to the N-word?  Instead, they launched into an orgy of cancel culture against the Alt Right designed to further demean their beliefs.  In 2017, Wes Bellamy, the Dem Vice Mayor of Charlottesville, Virginia, against the advice of most of Charlottesville’s leadership taunted the Alt Right leader Richard Spencer to come to Charlottesville to oppose the removal of Confederate statues, promising a huge counter demonstration. White Supremacists including Nazi and KKK came from all over the nation holding the infamous Tiki torch march chanting “Blood and Soil. Jews Shall not replace us.”  The next day Heather Heyder was murdered giving Wes Bellamy and the Alt Right the notoriety which they craved.

There is no gainsaying that Trump has capitalized on the violent Alt Right, but without the Dems Identity Politics and constant attack on Whites, the violent far right would have shrunk.  Trump’s January 6th incitement of the violent attempt to overthrow the government and the GOP’s strong support leaves the GOP and the Dems fund raisers in the same place of overwhelming joy!  The greater the fear and hate the more the money flows in.