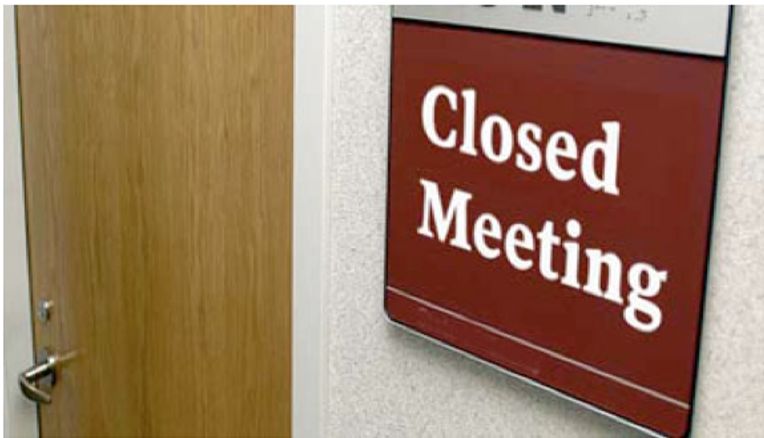 LA GOVERNMENT … SHORT ON TRANSPARENCY--According to the Congressional Research Service, as we’ve noted before, the U.S. House of Representatives has met behind closed doors four times during the past 190 years—in 1979, 1980, 1983, and 2008.

This coming week the Board of Supervisors has canceled its regular open meeting at Tuesday 9:30am and replaced it with a special closed session. Since the pandemic started this has become their regular practice.

The City Council, under Council President Nury Martinez, has indefinitely canceled Friday meetings and decided to limit the total time for public comment from its 4 million residents to 35 minutes, that's including general public comment and any comment on agenda items.

There is simply no way to sign up at the county, other than to give your name to an AT&T operator, but the Brown Act explicitly prohibits that. And good luck getting through. Neither the city nor the county, despite many requests for transparency, have made clear how they pick and choose who gets to speak. Many critics feel intentionally deselected. Why would the executive officer or city clerk voluntarily call up a harsh critic?

The city council and Mayor Garcetti, despite a high court finding a "pattern of conduct by the City at special city council meetings in violation of the Brown Act," on a motion by Paul Krekorian, cut to just 60 seconds the amount of time afforded to those who made the journey down to City Hall to address their representatives.

The city and Metro Board have finally agreed to be shown on a Brady Bunch grid on Zoom during meetings, but not the supervisors.  It's very exciting to have five little queens leading our county but it's important that our leadership be visible during meetings.

The pandemic should not be used as a pretext to muffle the voices of the "inconvenient public”—an necessary ingredient to a vibrant democracy.

By limiting the agendas and denying general public comment the current meeting schedules of both of these entities does not add up to "sound discretion" to reasonably "maximize transparency and access" to public meetings, as the governor's order requires.

The board argues that it receives thousands of letters weekly that will be made available to the Supervisors.  Sheila Kuehl, sometimes described as a progressive icon, is on the record. "The first amendment requires that you (the public) be able to speak, not that we are forced to listen."

Often, public comment is about speaking out to the press, other members of the public, the FBI.   Mitchell Englander is facing 14 months in federal prison for lying to federal authorities about a pay to play investigation at City Hall and Jose Huizar will be tried over the summer. Public input has been critical.

So, what is the public to do? The County DA's public integrity division is perpetually looking into Brown Act violations, but on August 19, 2020 the head deputy wrote "we are aware of no authority allowing this office [of public integrity] to "instruct the Board Chair to resume weekly board meetings forthwith"... "Therefore, we cannot take this action.” Where does our newly elected District Attorney George Gascon stand on all this?

A general public comment is often the last gasp opportunity to redress grievances. That critical moment being replaced with a Special closed session is unacceptable. It denies the public the opportunity to speak about items that are 'generally' under the board's jurisdiction, but not itemized on its agenda?

Lawsuits are certainly another way to direct powerful entities to be better citizens, but even if one invests the time and money to sue and prevail, as some of us have done, the agencies spend a seemingly endless supply of taxpayer funds litigating behind a "revolving" closed door.  And if you ask during a public comment how much the county or city is spending on such litigations, you very likely find yourself getting cut off and admonished that “you're disrupting the meeting."

The county and the city should both resume meeting regularly and devote the commute time that they may be saving to hearing from more constituents, virtually.

(Eric Preven and Joshua Preven have won LA Press Club awards for articles they co-wrote for The Intercept and CitywatchLA.)