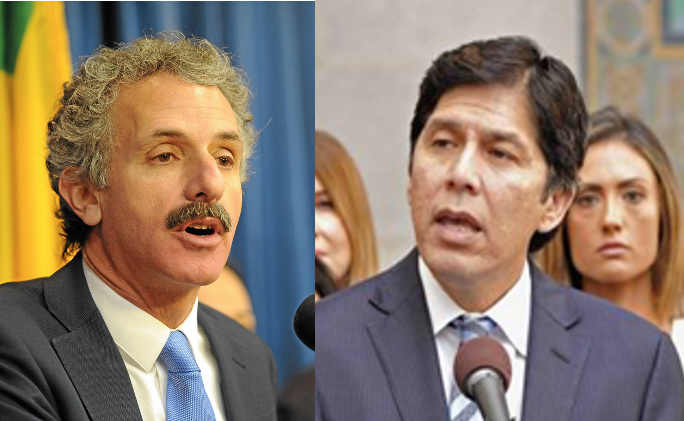 EASTSIDER-Ever since the Times Mirror Square property was sold by Tribune Media (4.5 acres) to Omni Group, the ultimate fate of the property has been grinding though the City of Los Angeles “Planning Department.”

“Formerly known as Times Mirror Square, The Times’ current Civic Center headquarters is a mix of five interconnected structures that fill an entire city block, bounded by Broadway and Spring and 1st and 2nd streets.

Shortly after Omni bought the property for more than $100 million in 2016, the developer filed plans with the city to demolish part of the complex and build a pair of high-rise residential towers and several retail stores and restaurants.”

Right at the height of power enjoyed by CD14’s Jose Huizar and his PLUM Committee, this was a plum for him in more ways than one.

I’ll get to Mike Feuer, Kevin De León (CD14), 2021 in a minute, but first let me pay homage to some great reporting. Here’s the story, which includes a wonderful paper trail laid out by the LA Times, and going back to last year. A big thank you to Times writers Emily Alpert Reyes, David Zahniser, Benjamin Oreskes, and Dakota Smith, for tracking yet another betrayal of the public trust by our LA City elected officials.

I’m not going to go all the way back to Huizar’s replacing termed out Ed Reyes on the PLUM committee. We’re talking about 2020-21, so I’ll start with August of last year when the AIDS Healthcare Foundation sued LA City to halt some of Huizar’s “special” development deals.

Now, you would have thought that the City Council and the Mayor would have gotten a little risk averse by this time (think federal indictments galore), but this is Los Angeles, where the Angels fled from our midst long ago.

As the Times article stated,

“The nonprofit wants the court to stop the city from spending any money or taking further action to “facilitate, review, process, or see to completion” projects in which Huizar or Englander were allegedly engaged in violating California’s Political Reform Act, which includes a provision barring officials from making decisions in which they have a financial interest.”

The article details the usual City Council BS about looking into matters without promising that they would ever do squat.

However, it did get my favorite “Attorney Running for Mayor,” Mike Feuer, to take a manly position. A week after the Times article, he boldly proposed an ordinance! As the Times duly noted:

“Los Angeles could revoke city permits and approvals for real estate projects if the City Council finds that developers or their representatives engaged in corruption, under a new ordinance proposed by City Atty. Mike Feuer.

In a letter to council members, Feuer said the city needs an effective tool to address development decisions “tainted by corruption and fraud” and to help restore public faith in City Hall. He urged the council to pass the ordinance swiftly and “put it to use” on projects implicated in the ongoing probe.”

No surprise, the development firm Carmel Partners was given a lot of space in the article, as they attempted to distance themselves from anything naughty like bribery, corruption, and the other charges against Councilmembers Englander and Huizar.

Anyone surprised that Feuer did absolutely nothing to revoke anything from the real estate establishment as he gets ready for his Mayoral bid?

Cut to January 2021, when our residence-challenged CD14 Councilmember Kevin DeLeon finally started making the rounds in CD14 venues. Evidently, his strategy to become Mayor himself in 2022 is 25,000 housing units for the homeless by 2025:

Of course, later in the article it becomes evident that there is no explanation as to how LA City can possibly pay for this lofty goal.

Further muddying the waters of DeLeón’s clean government and homelessness pledges, we find that his very recent vote in favor of the Times Mirror Square project looks a lot like business as usual.

After gurgling around the LA Planning process since 2016, the project came up for a final PLUM Committee vote last week.

“A key committee of the Los Angeles City Council on Thursday backed a developer’s proposal for two high-rise residential towers on a block near City Hall that was formerly known as Times Mirror Square.

The city’s Planning and Land Use Management Committee voted 3-0 to recommend certification of the project’s environmental report and the denial of an appeal sought by a nonprofit organization whose members are also in a union group.”

Notice the 3-0 vote, which included a January 21 letter by DeLeón in favor of the giant project with a couple of caveats. So, what did he get?

I’m including the meat of DeLeón’s letter since it was a last-minute addition to the Council Files. Here it is:

“First that TFAR Condition 3.c.i 2 and 3 be struck and replaced with the following language:

Secondly that  Condition 3.c.iii have a third provision added which reads as follows:

Lastly that Affordable Housing Condition 4 be modified to read:

Prior to issuance of a building permit, the owner shall execute a covenant to the satisfaction of the Los Angeles Housing and Community Investment Department (HCIDLA) to make 24 dwelling units available to  Workforce Moderate Income Households and 10 units for Low Income Household, for sale or rental as determined to be affordable to such households by HCIDLA for a period of 55 years. Said covenant shall provide that (a)  the Moderate and Low Income units shall be reasonably  dispersed in the project’s residential podium depicted in the plans in the Planning Department file  marked as Exhibit A; and (b) the design of the Moderate and Low Income units should generally   reflect the average number of bedrooms per dwelling in such residential podium.

Enforcement of the terms of said covenant shall be the responsibility of HCIDLA. The Applicant will present a copy of the recorded covenant to the Department of City Planning for inclusion in this file.”

I trust your ability to read the text and evaluate what exactly he got that has anything to do with homelessness, or for that matter “affordable housing” that anyone we know could qualify for.

Sigh. So here’s the latest saga of “bend over for big developers” that we’re so used to in Northeast LA, mostly because of Jose Huizar. This time, it looks like Kevin DeLeon forgot to read his own press releases; not to mention Huizar & Co’s various federal indictments.

I find it ironic that the two key players in this story are both really running for LA City Mayor in 2022.  Not that it would have anything to do with their position on anything. No sir, they are really spending all their time representing CD14 (DeLeón) and the entire City (Mike Feuer). Sure they are.

More importantly, we the electorate got suckered once before with this type of hyperbole, with Measure HHH. Remember that $1.2 billion measure that you and I will be paying for? In our taxes.

How about the something like 500 plus units of housing at a cost of around $530,00 per unit? Even the LA City Controller, Ron Galperin, freaked out over this.

To effectuate De Leon’s 25,000 housing units by 2025, do the math. With somewhere around 50,000 homeless in the City of Angels, this is one of those Eric Garcetti 5-Year plans, full of promise and undeliverable.

As for Mike Feuer, bring back James Hahn, who had integrity. Feuer is a politician with a bar card who never even followed up on his wimpy promise to do something about blocking Huizar’s “special” Special Projects.

(Tony Butka is an Eastside community activist, who has served on a neighborhood council, has a background in government and is a contributor to CityWatch.) Photos: Andy Holzman/Los Angeles Daily News; Getty Images. Edited for CityWatch by Linda Abrams.