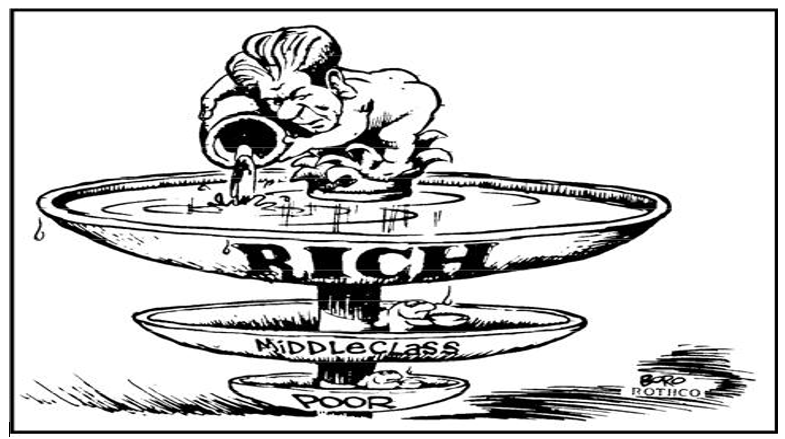 As I have argued in previous Planning Watch columns, urban Reaganomics will not solve the current housing crisis, even when dressed up with “progressive” slogans. Two recent studies confirm this conclusion.

London School of Economics professors David Hope and Julian Limberg recently published a monumental review of trickle-down policies and programs in 18 countries, including the United States.  They wrote, “Our new research on 18 advanced economies shows that major tax cuts for the rich over the past 50 years have pushed up inequality, but have had no significant effects on economic growth or unemployment.” Applied to the urban housing crisis, their findings explain why up-zoning ordinances do not increase the supply of low-priced housing or reduce residential segregation.

These frequent justifications for up-zoning are not, however, accidental mistakes; they are deliberate subterfuges. Their purpose is to persuade well-meaning but naïve Angelenos to support real estate speculation as a cure to homelessness and residential racism, the exact opposite of its real-world outcomes.

Furthermore, we now know the long-term consequences of Reaganomics. Based on a review of multiple studies on economic inequality, Charles Hugh Smith reports that Reaganomics has resulted in extensive gaps in income and wealth. He wrote, “The earnings of the top 0.1% grew 15 times faster than the earnings of the bottom 90%, as wages' share of the economy continues its 50-year decline.” Smith also shared the following chart from the Economic Policy Institute to document the growth of inequality in the Reagan era, its precursors, and in successive Presidential administrations. 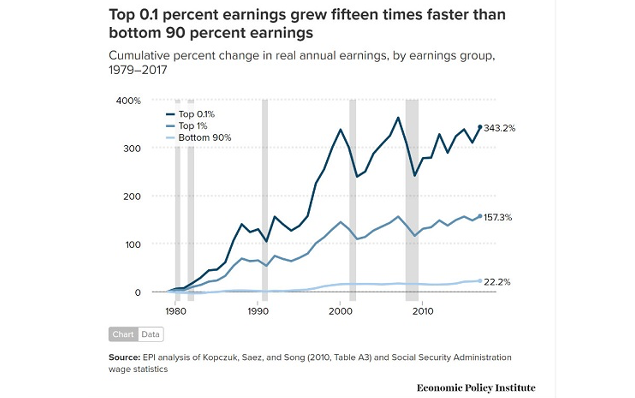 Since economic inequality is a major cause of the housing crisis, we need to take a deep dive into the long-term impacts of neo-liberal housing policies.

New apartments pull up the rents or nearby housing, despite the density hawks’ claims that increasing the amount of housing reduces housing costs. Nearby landlords do not respond to competition by cutting rents. Instead, they quickly learn that nearby tenants in new apartments pay top dollar. As a result, they cash in on this bonanza by increasing the rent in their older buildings.  This is why new, expensive housing increases the overall cost of housing.

New, private, residential projects, even in low-income neighborhoods, displace existing residents through rent increases, evictions, and demolitions. The only difference is that in poorer neighborhoods the cost of in-fill housing sites ought to be lower. But once landlords discover they can charge higher rents and find tenants, the honeymoon is over. A perfect example of this process is residential real estate near USC. Despite its inner-city location, new housing there is expensive because landlords charge market rents to students. As a result, their profits soar, parallel to the inflated cost of off-campus housing.

Camouflaging Reaganomics with liberal garb. The Fair LA Housing Program that I sharply criticized in a recent Planning Watch column demonstrates how advocacy groups, elected officials, and pundits, have figured out how to selectively hide their speculative real estate agenda with progressive catchphrases. This ploy allows them to gain traction with low information supporters who don't realize that up-zoning is the antithesis of progressive housing policy.

The Fair LA Housing proposal, which selectively increases RHNA allocations (i.e., up-zoning) will NOT result in low-priced housing. Cities, like Los Angeles, already have so much unused zoning capacity that they could double their population without up-zoning. The reason that developers don't tap this available zoning  -- sitting unused on every commercial corridor -- is because they are in the construction business. They don't build low-priced housing to meet a vast unmet social need because it is unprofitable. They prefer profits to bankruptcy.

Density bonus housing can, at best, only meet a tiny percentage of the unmet demand for low-cost housing. In Los Angeles, when developers include a small percentage of low-priced density bonus units in their market rate projects, no City inspector ever confirms that these low units exist, and their occupants are vetted low-income renters. It is a perfect storm for abuse.

Cities cannot compel developers to build anything, including low-priced housing. They can only make sure that there is sufficient zoning capacity. When the zoning is available, developers invest once they determine they can clear a substantial profit. In the case of housing, this hurdle undermines the impacts of increasing RHNA allocations in cities, like LA, which already have generous amounts of under-utilized zoning.

Unlike up-zoning, authentic progressive housing policy calls for shelter to be a human right, like public schools, parks, and libraries. There is a model for universal lost cost public housing right in front of our eyes -- the Pentagon. According to economist Richard Wolff, the U.S. Department of Defense directly buys weapons from private manufacturers. The Pentagon then maintains this material until they need it. The arms merchants make their profit because the government is their sole consumer.  This model could be applied to housing, meeting the basic needs to those who are too poor to buy or rent private sector housing. For this approach to work, the Federal government would contract with contractors to build housing for public sector buyers, such as HUD and local housing authorities.

If this country can de-commodify cruise missiles and aircraft carriers, then it can de-commodify relatively inexpensive shelter for its residents. In fact, the New York Times has calculated the total cost of providing shelter to all U.S. residents: $60 billion per year. This is $10 billion less than the $70 billion per year doled out as income tax deductions for mortgage interest payments. This $60 billon amounts to eight percent of the Pentagon’s current budget of $740 billion per year and five percent of the total U.S. $1.2 trillion military budget.

This debunking of urban Reaganomics packaged as up-zoning, in contrast to the program described above to end this country’s worsening housing crisis, indicates that the barriers to universal shelter are strictly political.

(Dick Plakin is a former Los Angeles city planner who reports on local planning issues for CityWatch. He serves on the board of United Neighborhoods for Los Angeles (UN4LA) and co-chair of the new Greater Fairfax Residents Association. Previous columns are available at the CityWatch archives and https://plan-itlosangeles.blogspot.com/. Please send corrections to [email protected]) Prepped for CityWatch by Linda Abrams.