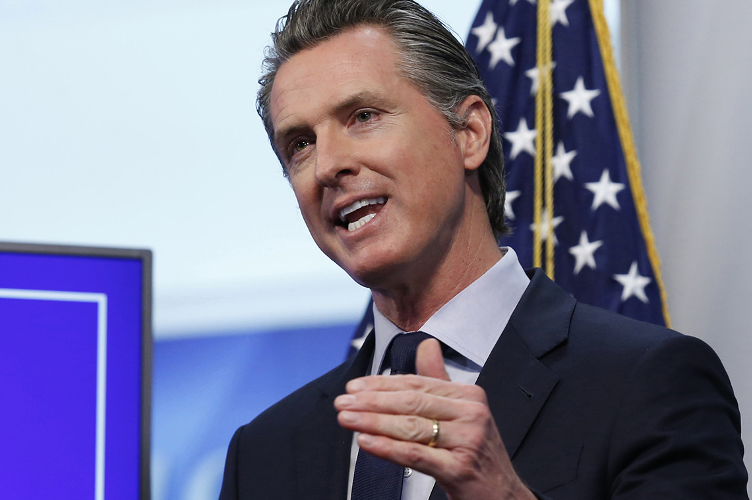 LEANING RIGHT--No, King Gavin, it's NOT about you.

It's about the miserable citizens of California, who don't have the funds and wherewithal to leave the state, or live happy amidst the misery of our middle-class and lower-economic-class neighbors, and/or maybe have to stay here because of family and other related reasons.

King Gavin, you really do NOT have the right to stay on and finish your term as California governor during the COVID-19 pandemic. It's been theorized by many that President Trump lost during the 2020 election because he didn't provide enough leadership during this pandemic. The same should apply to you, King Gavin.

1) Any and all regulations and federal distribution efforts from Washington were focused on getting the vaccines to the states--from there, it's up to the states to distribute the vaccines whether it's Trump or Biden in charge. That's the rule and the law, whether we like it or not.

Most Americans want to get those vaccines ASAP.

Yet a frighteningly-high number of healthcare workers refuse to take the COVID-19 vaccine, even with priority access. Has King Gavin addressed this issue? Has King Gavin ordered a priority list for hospitals, cities, counties and other entities to distribute the vaccines in a medically appropriate order, and to demand those healthcare workers denying themselves the vaccine?

It's called leadership, King Gavin--just because you and the elites have priority access to the vaccines, what about grocery store employees and nursing home workers most potentially exposed to the virus? Are you addressing--and loudly so--the inconsistent methods that hospitals and counties are distributing the vaccines?

2) Inappropriate shutdowns don't constitute the same thing as bringing the economy back and immunizing the California population ASAP (particularly in major urban centers with a greater population density that is of higher likelihood of COVID-19 spread).

If Black Lives Matter, is the black population in California, King Gavin, now suffering with higher suicide mortality being addressed with respect to the vaccine (black and Latino individuals have a greater predisposition and mortality rate from COVID-19) as Martin Luther King Day draws nigh?

3) Did King Gavin give up his salary despite his promise to cut his pay, particularly after the French Laundry restaurant incident where he destroyed his credibility by going to a mega-expensive lobbyist dinner with the California Medical Association and other lobbyists, and entirely unmasked?

Arguably, this incident alone should have led King Gavin to RESIGN, because the resultant number of "ordinary" Californians not masking and starting "bootleg" businesses to economically survive certainly exploded in number.

4) Are the excessive shutdowns, even including outdoor dining in a huge state like California helpful to a state replete with miserable and economically flattened citizens, the same thing as finding and promoting a laundry (not French Laundry) list of ways to open the economy in order to survive this pandemic in one piece?

Is virtue signaling the same as helping Joe/Jane California citizens who deserve earned income as much as job-bearing government officials and pensioners are claiming the shutdown (which doesn't affect them, really) should deny others earned income, King Gavin?

Again, it's called LEADERSHIP, King Gavin, because Texas ain't the only state with opioid prescriptions way up.

In short, King Gavin, you don't have the RIGHT to stay on as governor during this hellish pandemic anymore than anyone in Washington deserves to be in power does if they're deemed to have mishandled the leadership during this pandemic as well.

That means YOU, King Gavin ... and to those Californians who've signed the recall petition, don't stop now.

CityWatch Columnist, Kenneth S. Alpern, M.D, is a dermatologist who has served in clinics in Los Angeles, Orange, and Riverside Counties, and is a proud husband and father to two cherished children and a wonderful wife. He was termed out of the Mar Vista Community Council (MVCC) twice after two stints as a Board member for 8-9 years and is also a Board member of the Westside Village Homeowners Association. He previously co-chaired the MVCC Outreach, Planning, and Transportation/Infrastructure Committees. He was previously co-chair of the CD11 Transportation Advisory Committee, the grassroots Friends of the Green Line (which focused on a Green Line/LAX connection), and the nonprofit Transit Coalition, and can be reached at Ken.Alpern@MarVista.org. The views expressed in this article are solely those of Dr. Alpern.)

Investing in Destruction: California Teachers Pension Money Should Not Be Funding Line 3