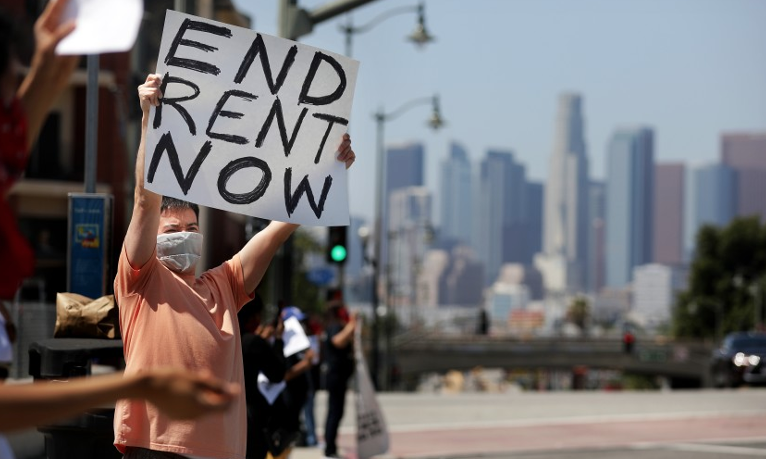 HOUSING POLITICS-A congresswoman tweets “Cancel [rent].” Others take the sentiment further, writing: “Every landlord is a fascist,” “All landlords are evil scum,” “Kill the landlords,” and “Landlords are the devil.”

Apart from social media postings like these, vilifying lessors has become common at rent-strike protests, such as the one in New York in which activists hurled furniture into the street.

Some people believe housing is a human right and should be free of charge. The cancel-rent movement suggests that a well-heeled tenant may decide to withhold rent and place the funds in a shared escrow account. “I know people who aren’t paying even though they can afford it,” says Roni von Henschen of the San Fernando Valley. “Maybe they figure they can live month after month for free since evictions are banned.”

The vitriol aimed at landlords may stem, in part, from the divisiveness of the nation, the bottled-up anger over coronavirus restrictions, and the fact that lessors are often depicted in movies as cranky, old slumlords who refuse to make repairs, complain about their lodgers, and enjoy throwing them into the street. The truth is quite the reverse; most landlords diligently make repairs and do not want to evict. A vacancy means the unit must, at minimum, be repainted and remain empty until a new tenant is found, leaving the property owner with a loss of revenue.

Another possible reason for today’s anti-landlord sentiment may emanate from the increasing gap between the rich and the poor and the false but prevalent assumption that all lessors are wealthy. The trending meme on Twitter #EatTheRich coupled with the phrase,  #EatTheLandlords supports this theory. As one Florida tenant says, "You have the rich [property owners] and then you have the people who serve the rich [renters].” This tenant believes there is clear-cut, balance-sheet distinction between the two factions -- a generalization that is false.

As a Realtor for 35 years, I have assisted lessors and lessees in the Los Angeles area. I have learned it is not unusual for a tenant to have a substantially higher income than a property owner. I have viewed credit reports, W-2s, 1099s, and profit-and-loss statements that establish this fact. Admittedly my experiences are rarely with large, multi-unit buildings, but instead with single family dwellings which are often owned by mom-and-pop landlords. Many of these owners are “cash poor.”

In other words, they are barely able to meet their own family’s needs for food, housing, and other essentials. And this is before taking into account their rental property expenses, such as mortgage, property taxes, insurance, upkeep, and repairs. For these folks, receiving rent on time is crucial. It is how they cover their bills. When their rental income vanishes—as has been the case for many due to eviction moratoriums—these small landlords are left in disbelief and despair, confused as to why the government is forcing them to carry the financial burden of the pandemic on their already broken backs.

Studies confirm my experiences. According to the Brookings Institution, small landlords own 40% of all residential rentals in the country, and a HUD survey found that 72.5% of rentals between one and four units are owned by mom and pops. A full one-third of these folks fall into the low- to moderate-income group, according to a Hamilton Project study. For those who make $50,000 per year or less, their economic survival may depend on their rental(s) and if they were employed prior to the pandemic, experts say they are unlikely to be employed now. Furthermore, another survey reveals that 58% of small landlords do not have access “to any lines of credit that might help them in an emergency.”

Months ago, there was a flash of hope for landlords when politicians announced the CARES Act foreclosure moratorium and mortgage forbearance plan, but it turned out this relief measure was, for many, no relief at all. The only properties that qualified under the Act were those with federally insured loans -- primarily owner-occupied residences.

A whopping 72% of rental properties are not federally insured by Fannie Mae or Freddie Mac. In actual numbers, this means over 31 million rental units in the U.S. were excluded from this massive congressional aid package. All of these landlords had zero assurance that their mortgage payments and foreclosure proceedings could be paused.

California’s eviction moratorium has been extended twice and could get renewed beyond the February 1 termination date if Governor Newsom perceives the pandemic has not subsided. Other states have similar bans (such as Washington, New York, and Oregon), and these bans could likewise be pushed forward. Plus, there is a federal eviction moratorium in place until the end of the year, and the Democrats’ most recent COVID-19 stimulus proposal extends this moratorium for an additional 12 months. This means that when this is all over, some very unlucky landlords -- who were perhaps already struggling with nonpaying tenants, pre-pandemic -- will have subsidized their tenants for approximately two years without public assistance.

Although tenants are supposed to reimburse lessors for back rent, this is unlikely to happen. It is not realistic to believe the average tenant will be able to come up with what could amount to $50,000 or more in missed payments. It is more reasonable to assume they will vanish from their rentals without a forwarding address, close bank accounts, or dodge collection agency calls.

The government’s destruction of small landlords in 2020 will be calamitous for tenants in 2021 and beyond. There will likely be an outbreak of foreclosures and sell-offs by those who are unable to endure the eviction-moratorium storm. When the small landlords disappear, so does much of the affordable housing. Corporate investors, real estate conglomerates, and Wall Street vultures will swoop down for the kill, snapping up properties, remodeling them, and raising rents. In the end, communities will be left with fewer economical rentals, and the chasm between the rich and poor will be a little wider.

This year, politicians have helped large corporations with tax breaks and bailed out smaller businesses with forgivable Paycheck Protection Program loans. They have subsidized the airline and agriculture industries. They have provided unprecedented assistance for tenants, undocumented immigrants / illegal immigrants, and the homeless. Yet they have done nothing for the small landlord, except force her to bear a costly and unfair burden.

Although there is a stronger case to be made for the mom and pop, it is equally unjust to turn the big landlord into an ATM for the pandemic. Their constitutionally-protected property rights have been disregarded, their lease agreements have been ignored, and any lessor who asserts her legal right to evict could face as much as a $100,000 fine and jail time. Keep in mind this is at a time when jails are being emptied of violent felons due to coronavirus.

What if oppressive legislation had been foisted not on landlords, but instead on Amazon, Kroger, and big box stores like Ikea? (Many big-box stores and retail conglomerates have raked in huge profits this year.) These corporations have not been forced to provide giveaways. Groceries are as much a necessity as housing so maybe Whole Foods should be required to hand out free food for the next twelve months. Maybe Target should be ordered to accept IOUs for shampoo, aspirin, and batteries. Perhaps gasoline should be at no charge for every Tom, Dick, and Honda in the country.

And why is there no public outrage against these corporations? Their executives are rich -- much more so than the average landlord. Why aren’t there marches in the streets to “cancel grocery bills”? Why aren’t there social media postings that say, “Costco is evil,” “CVS is the devil” or “Kill the cell phone company CEOs”?

Perhaps it is because angry mobs are not always rational, and they often feel entitled. They get riled up, choose an enemy, and seek to tear that enemy apart. Anger wants an antagonist. It needs an antagonist, and the landlord is its latest target. With massive protests come the short-sighted politicians who jump into the fray, wave their magic pens, and sign misguided legislation. They hope to win supporters, rack up campaign donations, and make the angry mob get off their lawn (or in LA Mayor Eric Garcetti’s case, stop protestors from screaming “free rent for all” in front of his estate).

Although damage has already been done, there are ways to help struggling landlords. Politicians could: 1) cancel property taxes for needy landlords, 2) defer mortgage payments and foreclosures for all rental properties (not just those that are federally-backed, 3) allow all landlords access to forgivable PPP funds, and 4) establish programs that pay the rent for tenants who have been affected by the pandemic. (In Sweden, the government has provided relief to landlords by reimbursing them with 50% of lost revenues.)