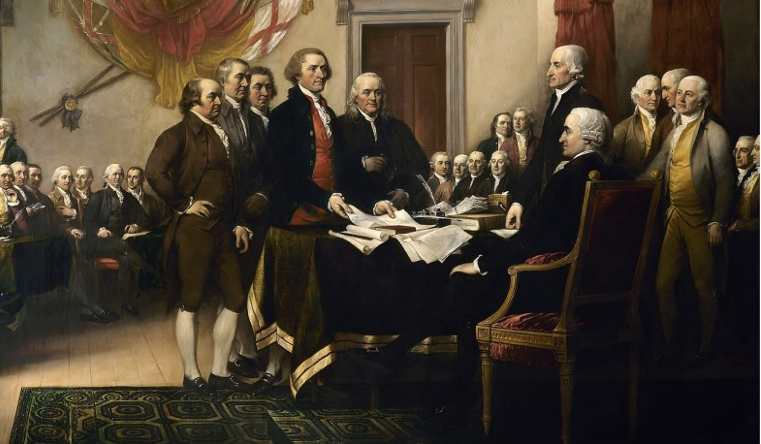 ONE MAN’S OPINION--The Declaration of Independence (1776) and the United States Constitution (1787) were not written because men are angels.

The two aspects of the human condition which the Declaration and the Constitution addressed were: (1) “Power tends to corrupt and absolute power corrupts absolutely” (Lord Acton, 100 years later in 1877) and (2) “The masses are asses.” (“der oylem iz a goylem” from mediaeval Yiddish, Alexander Hamilton, and every political philosopher who ever lived.)

The Declaration called inalienable rights self-evident truths because in reality they are neither self-evident nor true.  They are principles which the followers of John Locke (English 1632-1704) set forth as the basis for a society which was not “solitary, poor, nasty, brutish, and short,” as Thomas Hobbes (English 1588-1679) had described man’s fate in the state of nature.

Because we had revolted from British rule by asserting inalienable rights including Life. Liberty and the Pursuit of Happiness, when drafting the new government’s constitution, we avoided the two common pitfalls: (1) concentrating of power in the hands of a few and (2) granting power to the whims of an ignorantly myopic majority.  Excessive power and electoral ignorance are incompatible with a Life which is Free to pursue Happiness.

Thus, the framers rejected the notion of equality which was neither an inalienable right or a constitutional right and they shunned a democracy.  As Benjamin Franklin stated, the framers created a Republic, which we have failed to keep.  We are not a democracy!

With the Republic’s demise, we fell into a government which is best described as crimogenic.  Whoever controls the government, be he a king like Henry VIII who was a mass murderer of wives or a tyrant like Saddam Hussein who was an indiscriminate mass murderer, the head of state never admits his criminality.

The Soviets saw nothing criminal about sending people to the Gulag just as American judges saw nothing wrong with the mass incarceration of Black youth for which no rational reason has been articulated.  The Hollywood film studios, which were making all the TV crime shows and Black exploitation flicks, were staffed by men and women who were high on coke throughout the 1970's and 1990's.  Law enforcement was a heavy user of marijuana. My first marijuana party in the late 1960's was organized by my supervisors at the Los Angeles County Probation Department.  The PO’s in Juvey and the camps were often stoned. The Glendale PD bragged how they got their dope from the evidence locker.  The Rampart Scandal in the 1990's was ignited when Officer Raphael Perez took more than his share of the LAPD’s narcotics. (Ten to one, David Gabriel on The Closer was druggie at home which is why he was so unflappable at work.)

When the police, the prosecutors, and judges are using illegal drugs while sending hundreds of thousands of others to prison for the same behavior, society has become crimogenic.  We are not talking about a few individuals here and there using drugs, but the widespread systematic use of illegal narcotics by people in government.  A parallel phenomenon exists today with judges ’no-pay mortgages and off-shore bank accounts.

The economic crimogenics can be dated to the Equity Funding Scandal of the early 1970's.  The harbinger of worse things to come was when the authorities first attacked Ray Dirks, the security analysts who had figured out the mass frauds. How anyone could be fooled by Equity Funding defies the imagination.  I knew it had to be a fraud as early as 1971, but being a nobody, no one listened to me.

Equity Funding’s downfall did not deter the financial crooks so that the 1980's saw the Savings and Loan Scandals where the government again first attacked the whistle blowers but finally went after the less politically connected owners.  The criminality reached Congress with the Keating Five: Alan Cranston (Democrat of California), Dennis DeConcini (Democrat of Arizona), John Glenn (Democrat of Ohio), John McCain (Republican of Arizona), and Donald W. Riegle, Jr. (Democrat of Michigan).  The best person to explain this era is William K. Black http://bit.ly/2wjn5qL

Thereafter, financial criminality grew by leaps and bounds so that by 1999-2000, the Keynesian economic system was scrapped for Corruptionism with the repeal of the Glass-Steagall Act and the legitimization of Credit Default Swamps (economic weapons of mass destruction).  As Senator Byron Dorgan (D-ND) predicted in 1999, Corruptionism crashed the world economic system in 2008. Unlike the Savings and Loan Scandals, no Wall Street big wig went to prison. Today’s enhanced corruptionism is reflected in the fact that the stock market reaches new highs as Americans experience the worse economic disaster since the Great Depression.  Americans have become so habituated to living in a crimogenic society that they don’t even question when the 1% continues to get wealthier.

Do not think this in an indictment if the GOP.  The Dems are equally responsible.  Neither has any use for the Republic because a republic balances and thereby limits power.  A democracy, however, turns society into a winner-take-all proposition.  In a mobocracy, which both political parties are working their hardest to create, power is unlimited.  All one has to do it get the most votes to control the government and with that comes control of the economy.

In a Republic, there are various institutions so that power cannot accumulate too much in one place.  The greatest danger point is the Presidency which is why the Republic had both impeachment and the 25th Amendment.  Trump is both seriously mentally ill and a criminal (who has graduated to being a mass murderer).  The Dems’ refusal to cooperate with the GOP to remove Trump was rooted ultimately in Dems’ belief that they could capture the Presidency in November 2020.  Thus, the last thing the Dems wanted was any precedent where a corrupt President is removed from office.

Had Nancy Pelosi cooperated with the GOP leadership in late 2019 and allowed the testimony of people like Col. Alexander Vindman, Marie Yovanovitch, Fiona Hill to continue for a couple more weeks, enough GOP voters would have supported Trump’s being Nixonized to off-set the fury from the far right wing Trumpers. Then, today there’d have some sort of working relationship between the GOP and the Dems on Ruth Bader Ginsburg’s replacement. In abrogation of her constitutional duty to gather all the evidence of Trump’s high crimes and misdemeanors, Pelosi greatly enhanced Trump’s power.  Whether Trump or Biden wins in November 2020, the battle to control the corrupt economic system will continue.  Trump is already preparing for a civil war, while the Dems, as usual, aren’t prepared for anything.