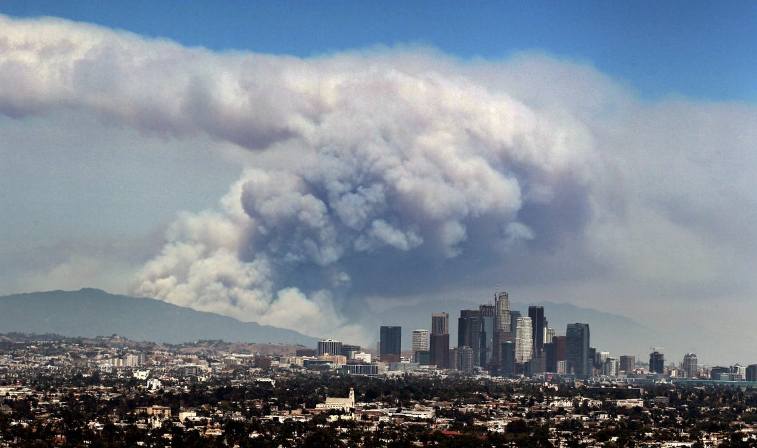 PLANNING WATCH-Smooth climate change deniers have learned how to appear more “woke” than Donald Trump and his anti-science supporters.

Instead, at LA’s deep blue City Hall climate change mitigation, adaptation, and monitoring is not just on the back burner; it is falling off the stove. In fact, no climate change initiatives are underway despite last week’s record heat wave, LA worst air since 1993, and uncontrolled wildfires on the entire West Coast.

In City Hall’s insulated world, climate disruption happens elsewhere, even when you can see and smell it. LA’s officials imagine that the City’s infrastructure and public services can withstand natural disasters, unlimited construction, and endless population growth. As for COVID-19’s rising unemployment, evictions, homelessness, and vacancy rates, they are only bumps in the road. We should look past the billowing pyrocumulus clouds and imagine ourselves in the City for the Future.

But beneath this business-as-usual decorum looms an enormous climate crisis that local officials cannot permanently ignore.

In the words on the Los Angeles Times, California’s horrific wildfires and toxic smoke stem from an apocalyptic climate crisis. This new normal arrived 80 years ahead of schedule, and Governor Gavin Newsom declared the following.

This is a climate damn emergency. This is real, and it’s happening. This is the perfect storm. . . If people are still in denial, . . .they’re not truly, I think, positioned to be the kind of leaders we need.

If Governor Newsom looked toward LA’s City Hall, not the White House, he would see homegrown climate change deniers in his own party. These well-spoken, well-dressed deniers never publicly claim that climate change is a hoax. Instead, they pepper their speeches with references to the Paris Climate Accords, sustainability, carbon neutrality, and resilience. Butthey also avoid taking any actions that would harm their donors’ highly profitable business models. Electric car charging stations are fine, as long as City Hall continues to hand out lucrative zone changes to deep-pocketed real estate speculators.

What exactly is (not) happening at City Hall?

First, the City department that had the capacity to monitor local climate change trends and programs, the Department of Environmental Affairs, was eliminated through Mayor Antonio Villaraigosa’s 2010 budget cuts.

Second, no other City Department has taken over the role of this former agency. While the Bureau of Sanitation and Department of Water and Power have new environmental offices, this is done without any City Hall coordination. 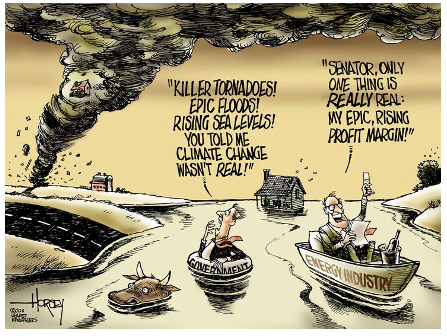 Third, in October 2019 the City Council approved the Climate Emergency Mobilization Office and Climate Emergency Mobilization Commission. A year later, they still do not exist. No one has started to inventory and coordinate the many climate-related policies, programs, and monitoring efforts scattered among the City’s many departments. No one has compiled the many Federal, State, and regional (SCAG, SCAQMD, METRO) programs that address climate change mitigation and adaptation.

Fourth, the closest thing to a Los Angeles climate plan is a fleeting Mayoral executive document, pLAn, renamed LA’s Green New Deal in 2019. But this document does not have a work program assigned to the City’s departments. It also is missing a municipal budget allocation, adopting ordinances, and public workshops, hearings, and debates. In fact, we do not even know about its environmental impacts because executive documents do not trigger the California Environmental Quality Act (CEQA). Finally, LA’s Green New Deal will disappear when Mayor Eric Garcetti is either termed out or joins the Biden administration.

What should happen at City Hall?

First, LA needs a serious climate plan, similar to other large cities. For example, King County, Washington, home to Seattle, has adopted a Strategic Climate Action Plan. It assigns specific climate change responsibilities to all County and City Departments, such as securing Seattle’s water supply.  This plan has, in turn, has become the model for many other city and county climate plans, but not Los Angeles.

Luckily, California state law and the City’s Charter require LA to prepare a comprehensive General Plan.  This is the perfect vehicle for adopting, implementing, and monitoring a municipal climate plan.  In addition to ensuring that its elements (chapters), such as Open Space (last updated in 1973), address their respective roles in mitigating and adapting to the climate crisis, the General Plan can add a Climate Change element.  Furthermore, the Governor’s office has published detailed guidelines for optional Environmental Justice and Climate Change General Plan elements.

Second, the Climate Change element should guide the update of local Community Plans.  At present, they are prepared out of sequence and misused to expand investment opportunities for real estate developers through attached up-zoning ordinances.  Since up-zoning increased land values, they result in expensive, auto-centric apartments. Only well-off, car-owning tenants can afford their sky-high rents, ensuring that poorly updated Community Plans will cause transit ridership to further  decline and Green House Gas emissions to rise.

Third, instead of helping real estate developers, updated Community Plans should prioritize public improvements that reduce the Green House Gas emissions responsible for climate change. This includes the construction of low-income housing near mass transit, in lieu of high-income housing for the auto-addicted. It should also emphasize caring for and expanding LA’s urban forest, repairing, and widening the city’s decrepit sidewalks, and installing buffered bicycle lanes, especially on transit corridors.

This quote from the movie, “Apocalypse Now,” describes the dilemma we face because of City Hall’s climate change negligence.

Soldier in Trench: “Ain't you?”

(Dick Platkin is a former Los Angeles city planner who reports on local planning issues for CityWatch.  He serves on the board of United Neighborhoods for Los Angeles (UN4LA) and is co-chair of the new Greater Fairfax Residents Association. Previous Planning Watch columns available at the CityWatchLA archives. Please send comments and corrections to rhplatkin@gmail.com or via Twitter to @DickPlatkin.) Prepped for CityWatch by Linda Abrams.