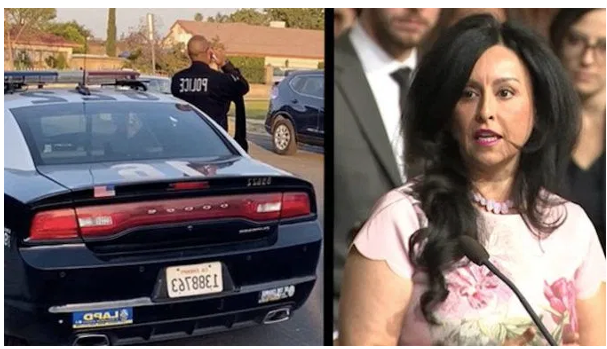 RANTZ & RAVEZ-Los Angeles City Councilmember Nury Martinez from the San Fernando Valley’s CD 6 and current Council President was pressed to explain to Spectrum News TV why she needed an LAPD Black and White unit deployed with officers stationed outside her residence for approximately two months with near round-the-clock coverage.

The detail was established during eviction concerns and protests at various locations, including at elected officials’ homes, by apartment renters who were unable to pay their rent due to COVID-19 and a lack of employment. The security detail was promptly eliminated after the story broke on Spectrum TV news. The council ultimately enacted an ordinance that protects from eviction renters who are unable to pay their rent.

Having served on the LA City Council for 12 years, I know what security and protections are provided to elected city officials. The expenditure of police funds and personnel to provide special security for Ms. Martinez for nearly two months is highly unusual and not in the best interest of service to the people of Los Angeles and in particular, the residents of her council district.

There are a limited number of officers assigned to each patrol division. When officers are pulled for a special detail like babysitting a residence, they are usually dropped from the patrol deployment, causing there to be fewer officers available to respond to 911 and other calls. While that specific location is protected, victims of crime wait for an officer to arrive and assist them. The number of uniform officers is shrinking every month. While the LAPD once totaled in the 10,000 range, the Department has reported that sworn members have shrunk to 9,882 as of September 5, 2020. The numbers will continue to fall in future months with the reduced LAPD budget.

To add insult to this matter, Ms. Martinez joined the Mayor and the majority of her council colleagues (Councilmembers Lee and Buscaino did not vote to defund the LAPD) in voting YES to DEFUND the LAPD to the tune of $150 million dollars. Talk about a slap in the face to the LAPD and the officers who sat for hours “Protecting and Serving” Council President Nury Martinez’s residence.

While the expensive and excessive use of police personnel and resources is of concern to most of us, how about the $10 million federal dollars Council President Martinez recently obtained to establish 50 supervised learning and after-school centers for low-income elementary and middle school students who need a place to study during the day.

The Safer at Parks program has set up workstations and the Internet for student use from 8 a.m. to 7 p.m. The program will include FREE breakfast and lunch as well as snacks for students.

While I don’t question the need to educate and care for students while providing a safe and proper environment for them, why not open the hundreds of schools operated by the LA Unified School District that are built and established to care for and educate students? Schools have the trained staff, facilities, and environment to provide care as well as educate students. They have the computers, the cafeterias, and all the rest. Why not use the $10 million for another purpose and have the School District do the job they were established, equipped, and funded to do? Doesn’t this sound logical?

Los Angeles is on the brink of a fiscal emergency. What does this mean to you the taxpayers and employees of the City of LA? It means that the City has and is spending more money than is coming into the City’s treasury. It means the City will have to push retirements, reduce hiring, and most likely reduce pay for many employees. There is even talk about reopening existing contracts with various unions and eliminating or reducing promised financial obligations and other contract agreements.

While this situation is still under discussion at City Hall, we need to know that the City is admitting they have a financial situation that requires immediate attention. There will be more to come on this matter once the City Council decides what action they will take to remedy the matter.

As I submit my RantZ & RaveZ for this week, we have learned that two young members of the LA Sheriff’s Department lay in the hospital in critical condition after being ambushed and are suffering from gunshot wounds. One suspect is on the run with a reward of $100,000 posted by the LA County Board of Supervisors. I have great confidence that the suspect will be arrested in short order. I will comment on this tragedy and related anger exhibited by some toward law enforcement in future articles. Keep these deputies and all first responders in your prayers.