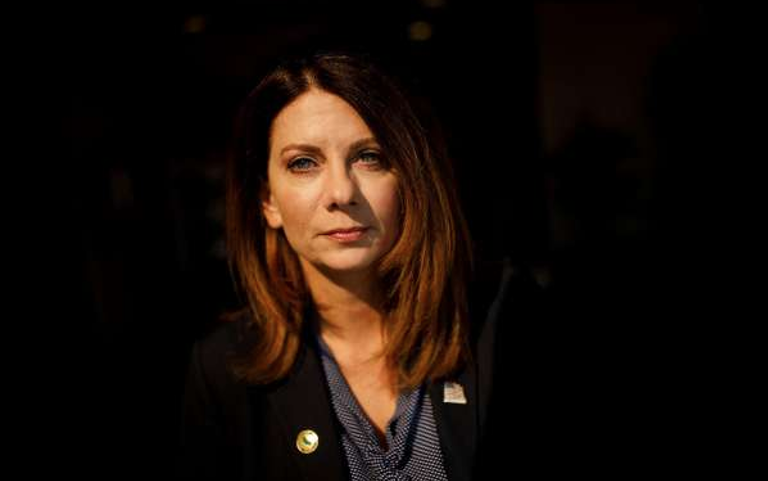 In the Middle Ages, the Earth was Flat and the Catholic Church was infallible...until scientists and honest, sincere theologians showed us all a better way.

Now it's acceptance of childhood sexuality and tolerance of pedophilia-ish behavior, and the presumption that overdevelopment means more affordable housing, and the buildup of California with horribly-insufficient infrastructure will help global warming, and that enabling mental illness is something that help our homeless crisis.

Let me repeat what I've stated in previous CityWatch articles: we're in a "Denaissance" of sorts, with extreme Leftist faith overcoming the Liberal reason that was a cornerstone of Western civilization for the past several centuries.

Screaming out the same memes and ignoring the reality in front of our eyes and reasoning minds is no less "faith over reason" as anything that the far Right has done with respect to science and human prosperity.

Enter State Senator Melissa Melendez (photo above) from Riverside County, who is as good as any an antidote for the State Senator Scott Wiener end of the political spectrum (who both Democratic and Republican civic-minded citizens fear, and for very good reasons).

Despite being in a minority party, she rightfully noted that debate (including the Republican minority, which in a state where the Democratic citizenry is being run by Leftist extremists) was being squelched and bills smashed through in the wee hours of the night at the end of the deadline for new bills to reach the Governor's desk.

And she was absolutely right to decry that as "bulls--t".

Because there's a LOT of bulls--t going on in Sacramento:

1) This really isn't a Republican vs. Democrat thing. For those of us throughout the Southland and the state who were horrified to see the slew of bills being rammed through that would trash environmental, zoning, and housing laws, and which would do virtually NOTHING to encourage more affordable housing (or even make housing LESS affordable), we were TERRIFIED of Sacramento.

Not because State Senator Scott Wiener or State Senator and Senate President or Atkins are liberal or homosexual--it was because they were totally bought out by developers and had financial conflicts of interest that makes the mind boggle.

And yet--despite the overwhelming numbers of unpaid citizens and local/city/county politicians demanding local decision-making power of zoning laws, the Assembly passed SB-1120 just before the midnight deadline August 31st, and before the Senate could ratify it to move on to Governor Newsom's desk, and probably to PLEASE well-heeled lobbyists and B.S. their constituents.

As in "see, it didn't pass" but yet it absolutely was voted on, and will pass yet again, if we don't throw the bums out of Sacramento.

2) Enter another horrible, dreadful bill, SB-145, also promoted by Weiner, that keeps being promoted again and again and yet again as NOT being lax on pedophilia.

Meanwhile, the "nothing to see here" and "it's only to protect and equalize the standards of homosexual and heterosexual youth sex" is, to paraphrase State Senator Melissa Melendez, just COMPLETE BULLS--T!

Should there be any differing standards between homosexual or heterosexual sex with respect to labelling pedophilia? Of course not!

And neither State Senator Melendez nor San Diego Mayor Kevin Faulconer, who have both decried SB-145, have mentioned anything about homosexual sex in their harsh critiques of the bill.

They're NOT decrying any situations where 14-year-old girls or boys lie about their age and say they're 16 or 18 to partners older than 18.

They're NOT decrying any situations where a 16-year-old and 19-year-old couple knowingly engage in intimate behavior and are aware of that relatively small age difference.

Shall we encourage Scott Wiener, and Governor Newsom, who just signed the bill, to form their new "Roy Moore Fan Club" to promote sex with children?

It is bulls--t. The results are horrible, despite our spending more than ever for affordable housing.

Misusing infrastructure funds and allowing overdevelopment to thrash our environment and quality of life?

It's bulls--t, even if we divert about global warming (which, if you're taking that seriously, which we must, should make us spend MORE, much MORE on infrastructure).

Using the COVID-19 pandemic to push through horrible, tyrannical legislation?

And allowing ANY consensual sex with minors if it's up to ten years difference, regardless of homosexual or heterosexual forms of sex?

And everyone knows it!

So, can we just end the bulls--t, or at least just call it for what it truly is?