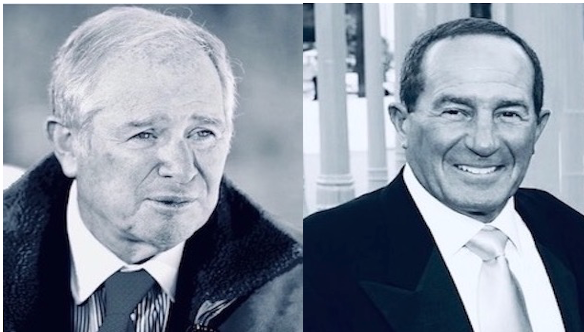 LA, THE CORRUPTION CAPITAL-Big Real Estate is up to its dirty tricks again.

Blackstone Group, billionaire landlord Geoffrey Palmer, and real estate bigwig Michael Hayde, among others, are using a little known political action committee to feed money into the No on Prop 21 campaign, attempting to dodge the media spotlight and the ire of Californians suffering from the housing affordability crisis. So far, the California Business Roundtable Issues PAC, a kind of shell committee for corporate landlords, has delivered $1.5 million to No on Prop 21: Californians to Protect Affordable Housing.

California’s Proposition 21 is the November ballot measure that allows communities to put limits on unfair, sky-high rent increases. The initiative is supported by U.S. Senator Bernie Sanders, labor and civil rights icon Dolores Huerta, Congresswoman Maxine Waters, and former United Nations special rapporteur on the Right to Housing Leilani Farha, among many others. Middle- and working-class Californians have been getting slammed for years by the housing affordability crisis — and renters are struggling even more to make ends meet because of the financial devastation caused by the COVID-19 pandemic.

Despite these catastrophic times of massive unemployment, an ongoing public health emergency, and worsening housing affordability and homelessness crises, corporate landlords such as Essex Property Trust, Equity Residential, and AvalonBay Communities are fighting tooth and nail to keep their power to charge excessive rents. These giants and other corporate landlords have shelled out tens of millions to stop Proposition 21.

In the 2010s, corporate landlords made a killing.

Zillow also noted: “The total amount of money spent on rent nationwide over the past 10 years is higher than the GDP of Germany (a shade less than $4 trillion in 2018), the world’s fourth-largest national economy. Total rent paid in 2019 alone is higher than the entire 2018 GDP of Thailand ($505 billion) and just short of Argentina’s ($518 billion).”

In 2019, San Francisco renters shelled out $16.4 billion, according to Zillow. In San Diego, renters forked over $10.3 billion. In Los Angeles, renters spent a staggering $39.1 billion.

In 2018, a broad coalition of more than 525 civic leaders, labor unions, social justice organizations, and housing justice groups in California attempted to rein in corporate landlord greed by passing Proposition 10, which sought to expand local rent control policies. Blackstone Group, Hayde, and Palmer were among the largest contributors to the No on Prop 10 campaign, which raised $77.3 million to successfully defeat the initiative through a massive, and deceitful, TV ad campaign.

During and after the Prop 10 election, Blackstone’s Stephen Schwarzman, Geoffrey Palmer, and Michael Hayde took major heat from activists and housing experts. United Nations special rapporteur Leilani Farha, in fact, singled out Schwarzman and Blackstone for “using its significant resources and political leverage to undermine domestic laws and policies that would in fact improve access to adequate housing consistent with international human rights law.” Her remarks made global headlines.

Perhaps in an effort to avoid another public relations disaster, Schwarzman, Palmer, Hayde, and crew have funneled millions into the California Business Roundtable Issues PAC. The organization is a powerful insider group based in Sacramento, led by chairman Brett Bittel and vice chairman Scott Lindquist.

Billionaires Stephen Schwarzman and Geoffrey Palmer, in particular, have terrible reputations among housing justice activists and the media, and may be trying to dodge the limelight by contributing to the California Business Roundtable Issues PAC rather than giving directly to the No on Prop 21 campaign. Curbed L.A., for example, deemed Palmer as “Downtown L.A.’s Worst Developer.”

And the No on Prop 21 campaign, whose chief spokesman Steve Maviglio is already a controversial figure, may not want to be associated with the billionaires — but still wants their millions.

So far, the California Business Roundtable Issues PAC has collected $21.5 million from real estate companies since January 2019, according to state filings. Blackstone Group delivered nearly a third of that — $7 million in contributions — in June 2020. Michael Hyde has shelled out $4.5 million and Palmer has forked over a little more than $2 million, according to state filings.

Those totals from Blackstone Group, Hayde, and Palmer are nearly identical to what they contributed to the No on Prop 10 campaign in 2018. Blackstone and its subsidiary Invitation Homes gave $7.4 million to stop Prop 10; Hayde delivered $4.7 million; and Palmer gave $2 million.

Stephen Schwarzman, Palmer, and Hayde are also major contributors to Donald Trump, shelling out millions either directly to Trump’s campaigns or to political committees linked to Trump, such as America First Action, Inc., Rebuilding America Now, and the Republican National Committee. Since 2016, for example, Palmer has delivered $14.8 million to Trump and associated political committees, according to Federal Election Commission filings. Schwarzman has shelled out $4.4 million since 2017.

On August 14, California Business Roundtable Issues PAC then handed over a check of $1.5 million to No on Prop 21: Californians to Protect Affordable Housing. Housing activists expect the PAC to deliver more of Big Real Estate’s millions to the No on Prop 21 campaign in the coming weeks. It’s the kind of backroom way of handling business that real estate companies are known for — and too often at the expense of hard-working Californians.

(Patrick Range McDonald is an award-winning reporter and advocacy journalist for Housing Is A Human Right and a CityWatch Contributor.)