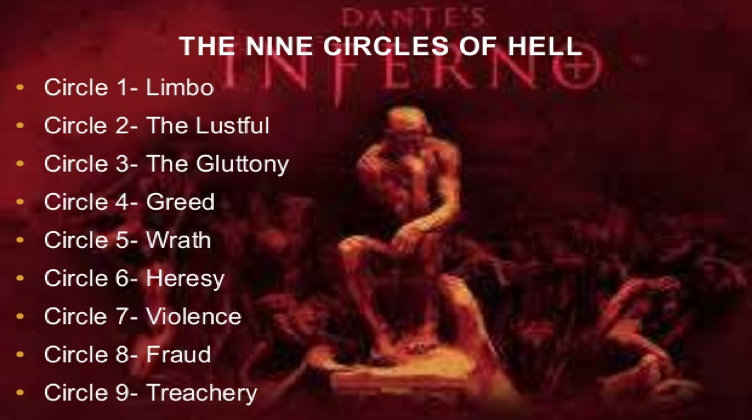 If you live in Los Angeles neighborhoods, like Beverly Grove, you already know what McMansion Hell is like. But, during the Covid-19 pandemic mansionization has reached new depths, dragging local residents down further, to the levels of fraud and greed.

CityWatch readers have already read the case against McMansions and City Hall’s futile steps to regulate them. McMansions are those infill, boxy, over-sized houses in many Los Angeles neighborhoods. Limited Liability Corporations (LLC’s) quickly and cheaply build them to wrack-up highly profitable sales to people with more money than taste. These mega-houses are designed to fill up as much of their lots as possible. They are squared off to reduce construction costs and increase square footage and selling prices. They mostly have flat roofs, so therefore require 24/7 HVAC.  When possible, they have a double front garage and driveway, which decreases vegetation and increases impenetrable hardscape.

Because McMansions are built for immediate sale, they previously netted their investors and contractors between $500,000 to $1,000,000 each in profits. But the Pandemic and deep recession have not only undermined this business model, but also introduced two more levels of McMansion Hell. 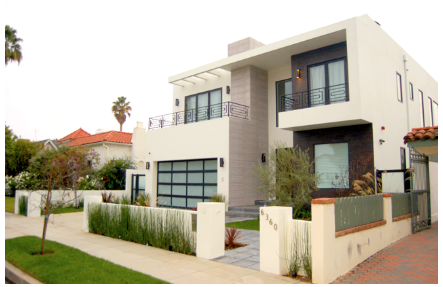 McMansions Hell Level 1 - Fraud: The Mayor considers McMansions and similar speculative construction projects to be essential, and therefore he exempted them from his multiple Covid-19 executive closure orders.

]]]  Unlike Bay Area counties and the states of Washington, Michigan, and New York, where closure orders included non-essential construction, in Los Angeles, work on McMansions, market-rate apartments, and luxury high-rise buildings never missed a beat. To justify this carve out for speculative real estate projects, the Mayor claimed that all construction was safe because contractors followed CDC construction guidelines posted on the Department of Building and Safety’s home page. But, for anyone familiar with these projects, this is a dangerous lie.

These construction projects were and are a source of Covid-19 community spread. According to the LAT, Los Angeles has 24,000 active construction sites, and LADBS claims they inspected them all, giving notices to 250 and forcing three sites to close. But there is no basis for these claims.  As far as I can determine, LADBS never proactively inspected LA’s active construction sites. As for 250 notices, even if they were sent out, LADBS is also claiming that the remaining 99 percent of local construction sites meticulously followed the CDC guidelines. All these sites had handwashing and disinfectant stations. They provided PPE to employees and required they be used. Contractors supposedly restricted site access and maintained a log of all those who entered each site.

As I wrote in earlier articles, based on my own inspections and reports people sent to me, none of this happened. In fact, a neighbor told me he repeatedly submitted code violation complaints to get someone from LADBS to inspect an adjacent McMansion construction site. Since the contractor ignored the first LADBS warning letter, the Department of Building and Safety shut the project down. The contractor taped this second letter to the project’s front fence. It clearly stated that only the LADBS General Manager could lift the closure order. Nevertheless, within several days the contractor resumed work. Shortly after that the taped letter disappeared. Like before, the contractor’s employees ignored the CDC guidelines, and my neighbor submitting new code violation complaints. The LADBS inspector in charge of this project wrote him back that if he continued to submit code violation complaints, no one would open his email.

The McMansion is now for sale, joining 46 other mega-houses that remain unsold in the greater Beverly-Fairfax area.

Meanwhile, the mansionizers are demolishing many older, less expensive homes in the midst of a deep housing crisis, and McMansion construction and the related threat of Coronavirus community-spread continues. Even with an uncontrolled Pandemic and forecasts of mass evictions, Mayor Eric Garcetti has dug in his Trumpian heels. He has not backed down from his decision that speculative LLC real estate construction projects are essential.  As for the desperate and vulnerable workers at these sites, contractors can easily replace them when they come down with Covid-19. As for neighbors, they are expendable as long as real estate speculators are still willing to throw good money after bad, especially when they tithe with campaign contributions.

McMansion Hell Level 2 - Greed: McMansions no longer sell, and in desperation their owners rent them out. They prefer long-term tenants and are listing their empty McMansions for an eye-popping $21,500 per month. With few takers, the mansionizers are now resorting to short-term rentals, such as AirBnB. They can get as much as $1000 per night for their white elephants, and no one from City Hall will cite them for violating municipal ordinances. Unlike the demonstrators who participated in a Black Lives Matter rally at Third and Fairfax on June 4, the mansionizers know the LAPD won’t lob tear gas canisters into their guests’ deafening parties or club unarmed partygoers with hands raised above their heads. 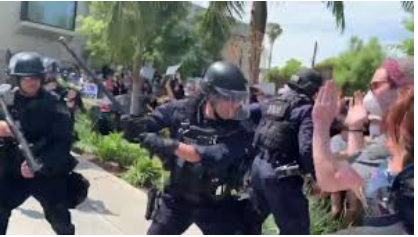 LAPD clubs demonstrators at Third and Fairfax on June 4, 2020

Because it is so lucrative for owners to turn their McMansions into weekend party houses, especially when bars are closed, these raucous house parties are quickly spreading throughout mansionized areas like Beverly Grove and the Hollywood Hills. Despite repeated efforts by local residents to have City officials shut down party houses as nuisances, they have gotten nowhere. They tell me that they are unable to get City Hall to ban loud parties in residential areas or enforce executive orders to arrest or remove unmasked partygoers crammed into tight spaces during a Pandemic.

In exasperation they tell me surely something must be done. As a former City employee, I tell them they are right in theory, and other cities have figured out how to prevent these public dangers and nuisances. But in Los Angeles it will take concerted daily complaints by dozens of residents to get the City Hall to enforce its own laws. This is because:

City Planning answers the (213) 267-7788 hotline for short-term rental complaints, but it has no enforcement authority. It can only answer the phone and pass details on to another City department.

LADBS has the authority to shut down discretionary projects, like short-term rentals, that have become nuisances. But, the legacy of its former General Manager, Raymond Chan, lives on. Even while he is packing his bags for an extended visit to a Federal prison, his maxim that developers, not the public, are the City’s customers, lives on.

Council offices have tremendous influence with City departments, but when it comes to McMansions, they are either unwilling or unable to take action. For example, before the Pandemic, a Council District 5 staffer told local constituents that his office had received 50 complaints that new McMansions violated the height and size provisions of new anti-mansionization ordinances for Beverly Grove and North Beverly Grove. In all 50 cases the Council Office sided with Building and Safety, which rejected every complaint.

The City Attorney and LAPD have the authority to cite or even shutdown noisy parties that violate the Mayor’s Executive Orders to stop the community spread of the Covid-19 virus. But, in these cases, the LAPD appears to be implementing Black Lives Matter proposals for reinventing policing. When the LAPD responds to multiple complaints about loud, late night parties, they either leave their business card or politely knock on a front door to ask the partygoers to tone it down.

Solution? Is there a solution to these two new levels of McMansion Hell? There is, but it will require local residents to mount massive, grass roots campaigns to get City Hall to take action. Many local neighbors must submit daily complaints about McMansion construction violations and loud McMansion parties to Council offices, City Planning, the City Attorney, Building and Safety, and the LAPD to get results. Until they make a total nuisance of themselves, developers, not the public, will remain City Hall’s favorites.

(Dick Platkin is a former Los Angeles city planner who reports on local planning issues for CityWatch.  He serves on the board of United Neighborhoods for Los Angeles (UN4LA) and is co-chair of the new Greater Fairfax Residents Association (GFRA). Please email comments and corrections to [email protected] or via Twitter to @DickPlatkin.) Prepped for CityWatch by Linda Abrams.