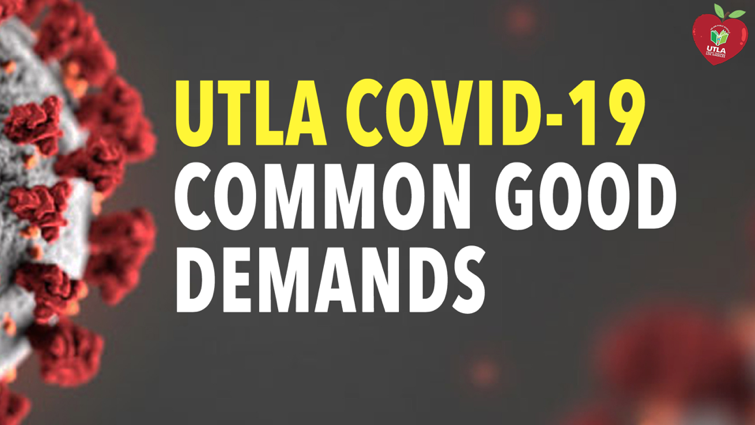 TALK BACK--“Ransom Note From LA Teachers Union Says They Need Medicare for All, Charter Moratorium, and More Before Going Back to Campus.”

No good deed goes unpunished. For our efforts to protect children and their families from a raging epidemic, United Teachers Los Angeles is being crucified in conservative media.

CityWatch columnist Kenneth S. Alpern, still gentler than many, accuses UTLA of making unreasonable demands which "have nothing to do with what's good for the students," and holding up the reopening of schools. Through this "power grab" and “overreach,” UTLA is, he says, trying to “supplant” the mayor.

In reality, what UTLA opposes is returning to schools which are wholly unprepared to deal with the COVID-19 spike in California. Medicare for All, defunding school police, a wealth tax, and a ban on new charter schools are UTLA political positions, not reopening demands.

It has been disappointing to see how quickly even major publications and networks have promoted anti-union accusations which, with a moment’s reflection, would easily be recognized as spurious. Do critics actually think UTLA believes that the Los Angeles Unified School District has the power to enact Medicare for All--a $30 trillion federal entitlement program? Why don’t teachers demand LAUSD Superintendent Austin Beutner institute the Dictatorship of the Proletariat while we’re at it?

To assert that our society is hobbled in fighting a pandemic because so many Americans don’t have access to regular medical care is hardly outlandish. One cannot help but note the differences between Canada, which has a functioning national health care system, and the US. Canada is largely reopening its schools. While it has 1/9th our population, it has 1/38th our COVID-cases. Canadians are now concerned that their number of new COVID cases has risen to 170 a day—less than 1/300th of ours.

Even third world Cuba has handled the coronavirus better than we have. According to a recent Reuters report, “Only a handful of COVID-19 cases were reported in Cuba over the last week, all in Havana. Most of the Caribbean island, home to 11.2 million inhabitants, has been free of the disease for more than a month…Cuba’s robust and free community-based health system, door-to-door search for carriers, isolation of the sick, suspected cases and contacts has allowed it to keep the number of infections under 2,500 with 87 deaths.”

That’s fewer than 1/1,700th as many cases and as many deaths as the US--in a country with 1/30th our population. Moreover, tens of thousands of Cuban doctors and other medical personnel are helping combat COVID-19 in the Caribbean and other parts of the world.

Nor is UTLA’s position on school police unreasonable. We’re right to note with alarm the rise in school police from 100 in the 1950s to 46,000 today, more than doubling in the past two decades alone. Conservatives often claim they want government out of our lives—a good place to start would be with the large, armed force that polices our children at school.

As educators we must respond to the needs of the communities we serve, and to the needs of our disproportionately minority students whose interactions with the police are often, to be polite, problematic. In a recent study reported on by Chalkbeat, one officer described how what is usually an annoying but mundane incident—a student refusing to leave a teacher’s classroom for an in-school suspension—escalated when a school police officer was called to tell the student to leave. The officer said:

“The next step after that is, if you’re refusing to do what I tell you to do…I’m probably going to take him into custody for ‘unruly juvenile,’ and we’ll settle it that way.”

One of my colleagues recently noted, “The Los Angeles School Police Department has been aggressive. I have had experiences where I am helping a student de-escalate and police make it worse. They do not have the training for a high school campus.”

In its 2017 Handcuffs in Hallways report, the Sargent Shriver National Center on Poverty Law stated:

“Research shows that the mere presence of police officers in school increases the likelihood that a student will be referred to law enforcement for adolescent behavior. School-based arrests, which fall more harshly on students of color, put students in direct contact with the justice system.”

The presence of school police also creates a layer of suspicion which reduces the flow of valuable information from students to staff. Several times I’ve seen students inform school authorities of an impending problem—sometimes a serious, dangerous one--and school personnel have used the information to avert trouble.

While school police may serve as a feel-good insurance policy for authorities, there is surprisingly little research on whether they actually make schools any safer. The research that exists is largely inconclusive.

“Whenever the cops kill an innocent black man, they give the excuse, ‘Oh it’s just a few bad apples.’ Bad apples? Some jobs can’t have bad apples. Some jobs, everybody gotta be good. Like pilots. American Airlines can’t be like, ‘Most of our pilots like to land. We just got a few bad apples that like to crash into mountains. Please bear with us.’”

Incessant stupid criticism from conservatives is nothing new for UTLA. We got plenty in the leadup to our successful January 2019 strike. Yet our 2017-2019 contract demands were righteous, reasonable, and student-centered. They included:

While most of the public only began paying attention right before the strike, we had been bargaining patiently—too patiently—for 21 months before we struck. When we won, it was a victory for our students. The thousands of students and parents who helped man our picket lines and march in our strike rallies were evidence that they understood what the fight was about, even if our conservative critics didn’t.

In the face of government bungling of the COVID-19 crisis, today we again act to protect our students. If we don’t, who will?