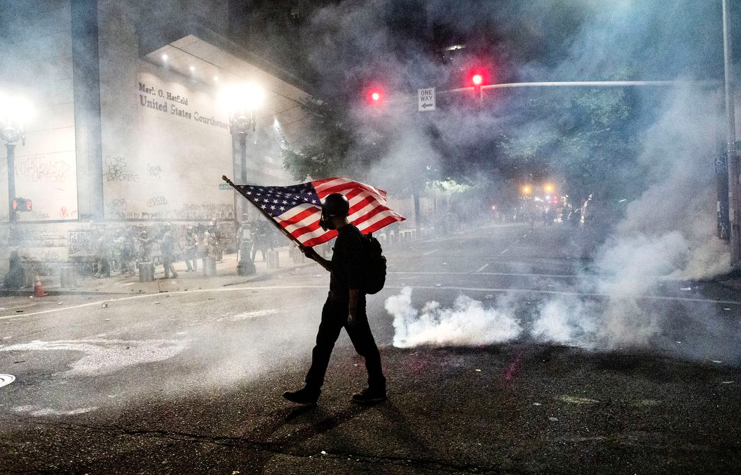 GELFAND’S WORLD--Have we finally gotten to that point that others warned about right after Trump’s election?

Back then, Timothy Snyder, a historian from Yale, wrote a short book called On Tyranny, about how to resist and avoid Trump’s fascist tendencies. In the interim, Trump has done and said a lot of outrageous things, but armed attacks on heartland America weren’t yet part of the brew.  Photo above: Federal police attacking protesters in Portland, Oregon.)

Well now we are there. The attacks on Portland by anonymous soldiers lacking identifying insignias is a serious step towards one-man rule. It’s not just the violence. Some principles matter, and democracy in a Constitutional republic is one of those principles. We’re now seeing a serious violation of that principle.

When I studied the Constitution back in the eighth grade, it became clear to me that nobody – and this certainly includes the president – is above the law. That’s the point of having a Constitution. Trump is now exceeding his lawful authority to such an extent that he ought to be impeached. But more than that, it is critically important that members of his own party disavow the latest actions.

What can be done to stop Trump’s latest actions? After all, he claims powers that are near-absolute. There is one way that would be quick, legal, and compelling: The congress could pass a bill forbidding any further expenditures going towards these activities. It could be written in half a day, and passed the next day – that is, if the Republicans in the senate are willing to stand up for American liberties including the right to peaceably assemble.

It would probably take veto override votes in both houses of congress, i.e.: two-thirds of those present and voting, a quorum being present. But it would be a good first step and a strong message to Trump simply to pass the bill by majority votes.

I’ve always been leery about all those warnings about fascism, but what’s happened lately is a serious escalation in lawless behavior by the president himself. It’s now going beyond the usual graft. It’s endangering American liberty itself.  It’s been enough to prompt Yale professor Jason Stanley to refer to Trump’s acts as fascism.

Stanley is pretty close, because sending an anonymous force of armed bullies into our city streets is the start. But there is a further escalation that we’ve luckily avoided, but should be worried about.

Many of us will remember Snyder’s book On Tyranny. It came out right after the 2016 election and was an immediate bestseller.

“Beware of Paramilitaries. ‘When the pro-leader paramilitary and the official police and military intermingle, the end has come."

So far, we haven’t seen the white supremacist Tiki-Torch amateur armies trying to join up with the federal troops, but it is something to be strenuously resisted.