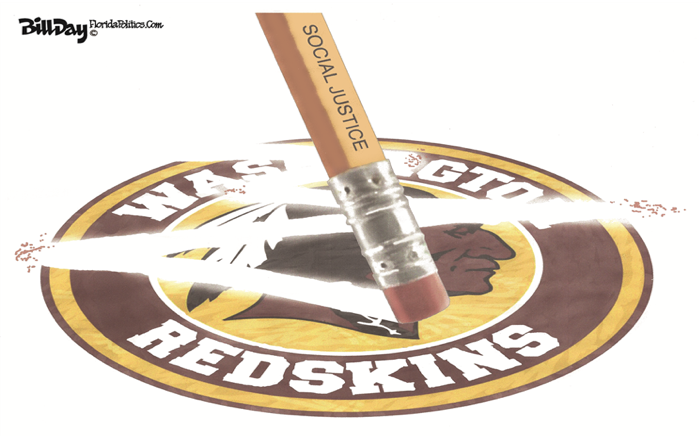 ALPERN AT LARGE--Like it or not, the Washington NFL team known for long as the Redskins will change their name.

As with the Confederate flag, if a symbol is deemed offensive to some (and I mean DEEPLY offensive), then it's up for us all to consider whether it's "politically correct" or "reasonably appropriate" to change a name and keep up with the times.

I suspect that many (maybe most) Native Americans have no problem with the name, but I'm guessing that very few would be upset or disappointed if the name did change. "Redskin" isn't a very positive epithet.

For the record, I think that many Native American references in youth organizations (such as Indian Guides, now called Adventure Guides) and even sports teams were very positive, and a lot of foolish, silly, childish white individuals changed them out of "white guilt" to the confusion and sadness of many Native Americans who appreciated that they WERE positive references.

And the United States is as much a nation of courageous Native Americans, Black Americans, Latino Americans, and Asian Americans as it is a nation of White Americans. But the name "redskin" isn't hard to conclude needs an update.

And if the Confederate flag should be removed from Southern states and similar venues, let's replace it with another fierce emblem like a snake with a "Don't Tread On Me" logo. Just because we're against slavery doesn't mean we can't all be "bad-ass" and fiercely independent.

And I hope that Black Americans from the South really take charge in a uniting effort to replace the Confederate flag and preserve a Southern taste and independent streak that doesn't conjure up slavery: "In God We Trust" is another one I like, but I realize that the word "God" offends a few people (not that I can relate to that, but avoiding conflict is a great idea whenever possible).

We beat the Japanese in World War II, in large part, due to innovative and brave Navajo Americans who used a language that the Japanese couldn't translate--it was strictly New World/American--in our radio communications. The Navajo Nation repaid the United States in a by far more positive way than it was treated...and I hope that this alternative is taken very seriously.

Hard stop for a serious name, unless something better comes along:

Now for a more entertaining discourse:

Of course, Washington, D.C. is also known for being the home of our political leadership, which is a lot less easy to cozy up to. So here are some other names that might be more appropriate, if not truly viable for a football team representing our nation’s capital:

And so you have it--just as I think the more uniting Black Americans can come up with a better emblem for the Fightin' South than a Confederate flag which conjures up too much misery for many people, it's likely that Native Americans who love the Red, White, and Blue can come up with an inspiring, fierce, and uniting name that will turn this controversy into a "net plus".

Because even though there are a lot of pathetic leaders in our nation’s capital, it would be nice to have a football team with a name that everyone can love.

(CityWatch Columnist, Kenneth S. Alpern, M.D, is a dermatologist who has served in clinics in Los Angeles, Orange, and Riverside Counties, and is a proud husband and father to two cherished children and a wonderful wife. He was termed out of the Mar Vista Community Council (MVCC) twice after two stints as a Board member for 8-9 years and is also a Westside Village Zone Director. He previously co-chaired its Outreach Committee, and currently is Co-Chair of its MVCC Transportation/Infrastructure Committee and Vice-Chair of its Planning Committee. He was co-chair of the CD11 Transportation Advisory Committee and chaired the nonprofit Transit Coalition and can be reached at Ken.Alpern@MarVista.org. He also co-chairs the grassroots Friends of the Green Line at www.fogl.us. The views expressed in this article are solely those of Dr. Alpern.)