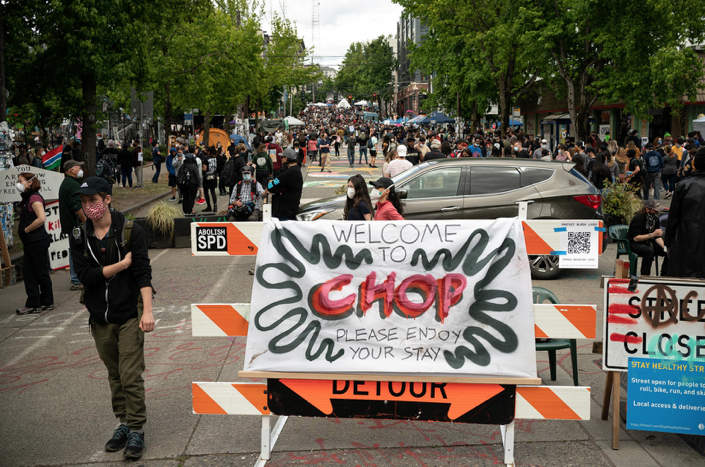 Because the efforts to "defund" or to emasculate the police, our laws, and our political oversight by our cities' mayors are not going to sit well with a public that is increasingly taxed and decreasingly defended from criminal elements.

So, the Capitol Hill Occupied (or Ongoing) Protest, or CHOP, is getting lawless, with property destruction and even loss of life, with anarchy setting in? What a shocker! Who knew that without laws and police that things would fall apart?

So Seattle Mayor Jenny "Block Party" Durkan still thinks that the CHOP idea is great, but might soon have to end it.

And the residents and businesses now suing Seattle for the financial hardship, vandalism, assault, theft, and even physical harm?

And now there 's a "Black House Autonomous Zone" being set up in Washington, D.C.?

Wow--what a race to the bottom! Because when you try to show you're more crazy and irresponsible than the Orange Man in the White House, it's NOT going to be a long-term winning strategy.

And it can very well be Exhibit A as to why Americans might vote to re-elect a man they don't like at all in November for another four years as a counterweight to the violence and lawlessness allowed by too many mayors.

Virtually ALL of the nation is united on the need to take action in response to the senseless death of George Floyd, but it's likely that only a small minority support the "police-free zones" as an answer to that.

George Floyd's killer STOPPED being a cop when he killed Floyd, and it's easy to demand that cops be good cops, and to remain cops, by NOT doing what Floyd's killer did. Ever.

But if the mayors and city councils can't control the lawlessness that inevitably occurs without police and law enforcement, then why pay them at all?

Heck, we just had Councilmember Huizar arrested...and with most of the City Council and Mayor breaking L.A.'s laws on a daily basis, why not just stop paying them or have any City government at all?

Ditto with our other major cities. Clearly, the mayors of Chicago (Lori Lightfoot) and New York (Bill DeBlasio) have so much minority blood on their hands and are obviously not up to the job. So why pay them? They're not doing anything, and without police or laws why have ANY government to pay taxes for?

And with other nations observing how Jewish and other minorities are undergoing a veritable Kristallnacht with the destruction of their businesses and neighborhoods it's hardly a defense of minority rights that our cities are truly promoting.

Of course, no one will be hurt more than black business and black individuals who not only see their own neighborhoods burning, but will likely suffer a blowback from non-black minorities of all colors who will presume they see "looters" instead of fellow Americans who happen to be black.

So... are the mayors of Seattle, LA, New York, Chicago, Washington D.C and other cities on the Trump payroll?

(CityWatch Columnist, Kenneth S. Alpern, M.D, is a dermatologist who has served in clinics in Los Angeles, Orange, and Riverside Counties, and is a proud husband and father to two cherished children and a wonderful wife. He was termed out as a Board member of the Mar Vista Community Council (MVCC), previously co-chaired its Outreach Committee, and currently is Co-Chair of its MVCC Transportation/Infrastructure Committee and Vice-Chair of its Planning Committee. He is a Westside Village Homeowners Association Director. He was co-chair of the CD11 Transportation Advisory Committee and chaired the nonprofit Transit Coalition and can be reached at Ken.Alpern@MarVista.org. He also co-chairs the grassroots Friends of the Green Line at www.fogl.us. The views expressed in this article are solely those of Dr. Alpern.)