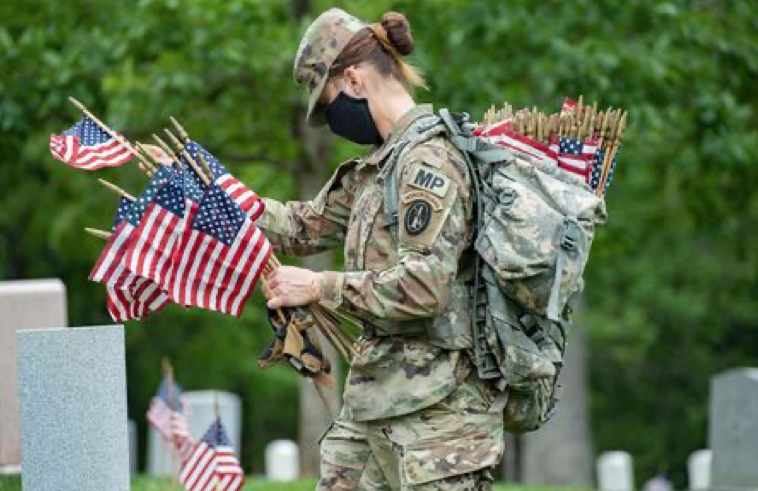 ALPERN AT LARGE--Normally, I would be devoting this article to the dedicated youth in our nation who got up early Saturday morning to dedicate the fallen at the West Los Angeles Memorial Cemetery.

I have previously, and will state again, that our youth has been robbed their year of school, their proms, their parties, their play-dates, their sports, their graduations, and their childhood...not due to the president of our nation, or the governor of our state, or the mayor of our city.

Each of those political leaders has their supporters, their despisers, and those who conclude that "everyone screwed up at key junctures". But the Boy Scouts', Girl Scouts', and other Scouts' traditional Memorial Day flag planting ceremony, as with so many other critical events, did not get taken from them by our political leaders, either Democratic or Republican.

Only one entity, as I've stated before in CityWatch, truly knew what went on where this pandemic started, and knowingly let the world become infected. Many would rather point a finger at other Americans, which is what the perpetrator here would love more than anything, but only one entity--the Chinese Community Government, can be rightfully blamed.

Blaming Trump or Newsom or Garcetti may have an element of truth to it for the deaths--the lack of preparation, the distracting impeachment effort, the lack of manufacturing preparedness, and the nursing home deaths aplenty all are reasonable and major points of contention.

But this is Memorial Day, and this is the first time since 9/11 that our nation isn't just mourning our fallen heroes of the past but is now actually mourning the heroes of the present.

This time things are different--and now the warriors among us don't usually wear military uniforms.

Never has it been more than before that "we have nothing to fear but fear itself".

And those with fortitude will win the day, while those with fear will have to be dragged across the finish line (no matter how righteous they envision their self-defeating attitudes).

1) We are in a race to find the right testing protocols, the right rapid-testing materials, and the right to figure out HOW to reopen our society and our economy.

Instead of military manufacturing efforts, our scientists are figuring out with every week new ways to test and to develop practical protocols to determine the spread and the early diagnosis (and treatment!) of the COVID-19 virus that was unleashed on us about 6-12 months before it should have, and with no transparency as to where it came from.

Yet our biomedical companies have made major and amazingly-rapid steps towards finding an answer, such as the Moderna vaccine and the Abbott rapid-testing device.

Our American companies here, and the European companies with which we are aligned, have for decades been better than their Chinese and other Eastern counterparts, so there is no shortage of reason for optimism if we remain firm in our commitment to win this new "Race to the Vaccine" which is the new "Race to the Moon" in this new, 21st-Century Cold War with Communism.

No one more than the hapless Chinese people, both of mainland China, and its surrounding historical Chinese nations, will suffer more. We need to separate the rightful fury against the Chinese Communist Party, and all those economic and political global entities who enable it, from the Chinese people who suffer under that Party.

Unlike imperial Japan in the 1940's, which had the backing of the Japanese citizenry, it's doubtful that the average Chinese citizen supports what their one political party has done to either its quality of life (no matter what the improved economic benefits), but the Chinese Communist Party did in effect wage war on the U.S., the West, and the rest of the world.

And we must respond in kind, and without military response but with manufacturing strength instead, in order to win the day and the world for the generations to come.

A Chinese-dominated world will certainly be more horrible, and less kind, than the Western-dominated world we have enjoyed since 1945. We cannot lose their new form of bioeconomic Cold War.

2) We are a nation divided, and both major presidential contenders must be held to task as to the proper medical, manufacturing  and economic methods to win this war that has been imposed upon us from the other side of the world.

President Trump has said so many off-the-wall things, some sarcastic, some in knee-jerk petulant response to inappropriate things that others have said about him (and part of being the President is to endure the barbs of the electorate, including the media) that even his supporters are irked and annoyed.

What is also no surprise is that former Vice-President Joe Biden is also prone to more gaffes than can possibly be enumerated, the latest declaring African-American voters to not truly be "black" if they don't vote Democrat and/or against Trump.

There is little to no doubt that either Trump or Biden are proud of anything they said out of knee-jerk sarcasm or ventilation, or even just "thinking out loud" And those who waste too much time in presuming what they meant, or how this would affect their final actions, may be part of the problem.

In the end, what do Trump or Biden SAY, versus what will they DO?

And it's also complicated as to whether the black activists who warn Vice President Biden against choosing Amy Klobuchar as his running mate became they want someone more favorable to black Americans is on the mark or just more problematic in the thorny range of issues of our own nation lies so internally divided.

But our November elections will be filled with silliness, and the debates the stuff of comedic movies, so the need to figure out "WHO HAS THE PLAN?" will be foremost on most sober, calculating American minds.

This is one election we must get right.

3) In short, we shouldn't be too harsh, but "respectfully if not vigorously disagree" with those who fear we are being either too cautious or too cavalier about the pandemic in which we live in, and which our children must endure. Arguably, it's all ABOUT the children.

Or shall they see us choose innovation, hard work, and cooperation to bring back our economy?

To those who can, put on your mask and/or face shield (and face shields WILL replace masks sooner or later for those not too close to each other) and ... get ... to ... work!

I absolutely STILL predict, as I have predicted for months, that the first vaccine, imperfect though it may be, and requiring annual updated vaccines like we do for the constantly evolving influenza virus, by THIS FALL. Our technology and combined will, can and certainly will win the day, here.

So those who WANT to divide the nation should be the ones we fear the most...

...because they throw aside the focus, and distract from the entity who knowingly imposed this disaster upon us from the other side of the world, and before we could possibly have been prepared to resist or combat it.

Let this Memorial Day focus on those whose lives were cruelly and savagely taken from them, and left to die miserably and alone, by a virus that none of us, liberal or conservative, Democratic or Republican, ever, ever, EVER deserved.

And let future Memorial Days have youths who honored how WE stood up to the challenge and when WE had to fight this new, complicated, but very real war.