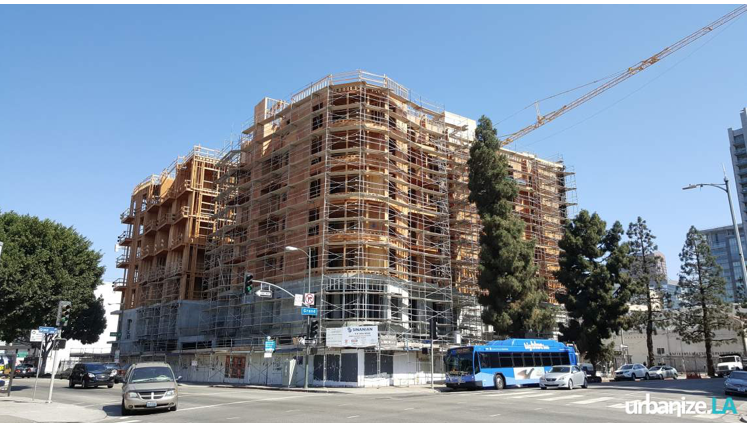 PLANNING WATCH-Like Coleridge’s Ancient Mariner, for whom there was, “Water, water, everywhere, nor any drop to drink,” today’s homeless and over-crowded find themselves awash in a sea of vacant residential units – continuously expanding -- that they cannot afford.

While this may seem implausible to you, you can trust your eyes, even during a Pandemic that has shut down much of the economy. Nevertheless, Los Angeles is still in the midst of a building boom, mostly McMansions and market rate apartments (i.e., expensive), like the apartment building in the photograph above.

But, just in case you don't believe what you see, you can track this building boom, but not its dire consequences for LA’s residents, including construction workers, through the following online data sources:

Urbanize LA charts major new projects in every Los Angeles neighborhoods. If you want to know more about a large project proposed or under construction near you, this site will have the details since all those power tools and clanging hammers have a detailed financial back-story. But, be warned. If you are concerned about the hundreds of speculative McMansions still under construction, oblivious to the Mayor’s Covid-19 Executive Orders or the Covid-19 Guidelines posted (but not enforced or enforceable) on the LADBS website, Urbanize LA will not have the information you are searching for.

The Los Angeles Department of City Planning prepares and posts quarterly reports for housing building permits in Los Angeles. They indicate that nearly 150,000 residential units have been approved for construction since 2015, nearly all of which are costly market rate units, not low-income apartments. To be clear, though, there are shortcomings with this City data.

First, when LADBS issues a building permit for a residential structure, there is no guarantee that construction will be completed, and LADBS will issue the project a Certificate of Occupancy.

Housing Crisis is Still Getting Worse: While there are other on-line databases that document the current building boom, other housing data is far more troubling. Despite the continued building boom and up-zoning schemes to promote housing construction, the housing crisis is getting worse. Even though the overall supply of housing in the Los Angeles region is increasing, the number of people who are homeless, living in cars, couch-surfing, overcrowded, paying far too much for rent, or leaving Los Angeles for cheaper housing markets is also mounting. 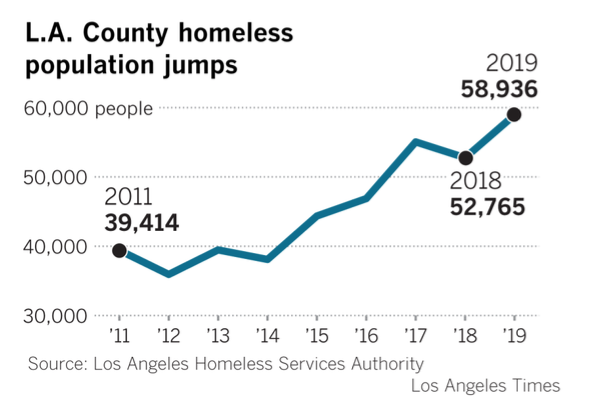 Furthermore, because cities, like Los Angeles, are on the front lines of providing emergency shelters, public sanitation, and social services for the homeless during the Covid-19 Pandemic and recession, cities are now in a deep financial trough. In Los Angeles Mayor Eric Garcetti’s recent State of the City address revealed that the increased demand for municipal services has merged with a shortfall in revenue because of declining tourism and retail sales. As a result, the City of Los Angeles faces a deficit of over $600 million. The Mayor’s bridge over this this financial hole is a hiring freeze and limited furloughs for 16,000 City employees.

At a time when cities are essential for limiting the health and economic impacts of the Covid-19 Pandemic and reviving local economies through public works projects, they are being forced to retrench. This is exactly the opposite of what is necessary for an adequate response to a combined public health and economic crisis. For those who think the Federal government will suddenly ride to the rescue of financially strapped cities, like Los Angeles, just remember that the $500,000,000,000 (billion) secret slush fund that Foreclosure King and Secretary of the Treasury Steve Mnuchin controls is covertly headed for large corporations, not state and local government.

The “Inexplicable” Anomaly: How do we explain these counter-intuitive housing trends? After all, City Hall officials, professors, State Senators, Astroturf lobbying organizations, and main stream journalists have repeatedly assured us that increasing the supply of housing though market deregulation and density bonuses will cure the housing crisis. Nevertheless, their miracle cure is not working. Homelessness, overcrowding, and rent gouging have gotten steadily worse, fueled by a real estate boom that is supposed to be a solution, not a cause for ever more people to live on public streets and in private cars.

Explanation #1: There already is a glut of expensive housing in Los Angeles. Even if the contractors can rush the current crop of McMansions and luxury apartments to the finish line before their financial backers pull out and/or their construction workers fall like flies from the Covid-19 virus, the investors will discover that Los Angeles has 110,000 empty units, or three vacant houses or apartments for each homeless person. Those many For Rent and For Lease signs on apartments throughout Los Angeles are not a mirage. They simply indicate that those who are already subject to rent gouging or have ended up homeless cannot afford LA’s over-priced average rent of $2,665 for a one-bedroom apartment and $3,671 for a two-bedroom apartments, as of March 2020. These Angelinos are priced out of LA’s inflated housing market, and the steadily increase housing supply has not made any difference in their lives.

UCLA Anderson School’s Prof. Jerry Nickelsburg explained why. California would need to build hundreds of thousands of new units to slightly reduce housing costs, and the likelihood of this happening in the midst of another Great Recession is nil.

Quite simply, despite so many vacancies, those who desperately need housing cannot find an affordable place to rent, so they end up over-crowded, on couches, cars, or city streets. This is why 60,000 people were homeless in Los Angeles County last year, and why those numbers will climb higher in 2020. The one-third of renters and homebuyers who could not make their April payments will grow for two reasons. First, those in desperate economic straights will increase. Second, the temporary prohibitions on rent increases and evictions will soon end – unless supported by enormous anti-eviction movements.

Explanation #2: While many pre-Pandemic economic trends, like gig jobs, were a bad omen, the spike in unemployment in the U.S. already triggered by the Covid-19 Pandemic and a one-sided Federal rescue package that only offers a pittance to the suddenly unemployed makes housing conditions much worse. As a result, ever more people are being pulled into the housing crisis vortex. In fact, the eventual number of foreclosures is expected to surpass the seven million foreclosed homes during the recent Great Recession. 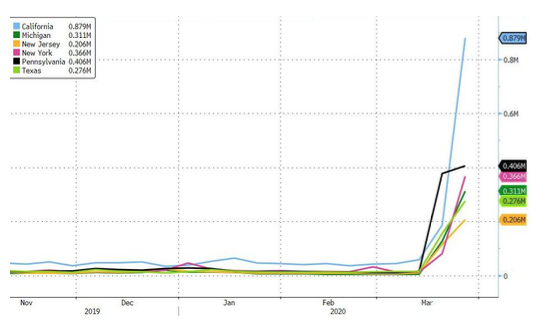 According to Vox’s Catherine Kim, the likelihood that these unemployment trends will result in a worsening housing crisis is strong once the immediate financial crunch becomes a long-term economic recession.

“Homelessness will only grow in the US as people continue to lose their jobs as the economy shuts down because of Covid-19. So far, more than 22 million people have filed for unemployment, and 31 percent of tenants in the US did not pay their April rent at the start of the month.”

This expected growth in foreclosures means that more families will be forced to give up the homes and condos, desperately looking for inexpensive rental units. This might allow landlords, especially corporate ones, to maintain cash flow and reel in long-term serious profits, but its spells doom for these families. So far, 3,000,000 mortgage holders have applied for relief, and they only represent 5 percent of all those who hold residential mortgages. When the long-term furloughs, layoffs, and cutbacks dig deeper, and when the short-term moratoria on evictions and foreclosures ends, the total number of dispossessed will climb, unable to move into the stock of empty homes and luxury apartments.

The mismatch between the growing supply of expensive apartments and houses and the unmet demand for low priced housing will grow. The supply side solutions of “build more housing during the Pandemic” spouted by LA’s Mayor and California’s Governor, can be dumped at the side of the road. If they are lucky, they will find an empty spot next to piles of rotting vegetables that farmers could not sell, even though food banks suddenly have lines a mile long.

(Dick Platkin is a former Los Angeles city planner who reports on local planning issues for CityWatchLA. He serves on the board of United Neighborhoods for Los Angeles (UN4LA) and is co-chair of the new Greater Fairfax Residents Association. Please send comments and corrections to [email protected].) Prepped for CityWatch by Linda Abrams.