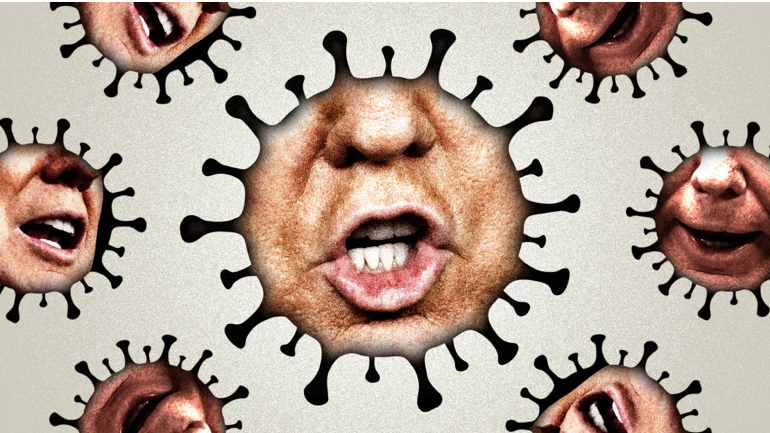 TRUMP VIRUS-Trump’s outright refusal for weeks to invoke the Defense Production Act authorizing the president to prioritize the production and distribution of scarce materials deemed "essential to the national defense, specifically protective equipment (presumably face masks) and ventilators, has put millions of Americans at risk.

Even now that it’s been invoked, Trump has refused to authorize orders because it he has stated it smacks of socialism. Mmm. I sure don’t remember hearing any mayor in America say: “Give me capitalism or give me death.”

Trump claims he delayed invoking the Defense Production Act because he wanted to avoid nationalizing U.S. businesses – funny because parts of the Act have been used throughout his reign to place orders for the Defense Department and FEMA to build drones and missiles, body armor for Border Patrol agents, and for disaster response and recovery efforts. Maybe not to the same degree but surely this is exponentially more important on a social level.

No businesses have been nationalized due to those uses, although it might be very wise to nationalize or insist the government obtain an equity position in any U.S. business demanding a bailout now. So the taxpayers can get their money back the same way the U.S. Treasury recouped 80% of the money used to sustain General Motors during and after the 2008 financial meltdown – but that’s another story.

More to the point, Trump’s clear animosity toward immigrants, both legal and undocumented, is further impairing efforts to contain the Coronavirus, which he has frequently referred to as the Chinese Virus, by spreading fears that if immigrants seek medical or financial help, they will be targeted by his administration’s repressive and racist policies.

This will further exacerbate the spread of not only this virus but also other diseases since most new and undocumented immigrants live in crowded conditions, have limited financial resources, and lack both health insurance and the ability to self-quarantine.

Since Trump has done more than most, through inaction and outright denial, to exacerbate the spread of coronavirus throughout the states and around the world, it is only fitting to ensure he is memorialized by rechristening the Coronavirus aka COVID-19, as the Trump Virus. Others have suggested this, and it also brings to mind the childhood rhyme about “Fools’ names and fools’ faces, Often appear in public places.”

Given this is a President desperate to claim his place in history – so be it. Trump Virus it is.

Trump’s inaction and false assertions about the virus only builds on his other endearing (not) trait, his overt and ugly racism which in recent weeks has been mirrored in his devotees’ actions against people who appear Asian across the country since the Trump Virus first jumped the Pacific.

(Liz Amsden is a member of the Budget Advocates, an elected, all volunteer, independent advisory body charged with making constructive recommendations to the Mayor and the City Council regarding the Budget, and to City Departments on ways to improve their operations, and with obtaining input, updating and educating all Angelenos on the City’s fiscal management.) Illustration: Mother Jones. Prepped for CityWatch by Linda Abrams.