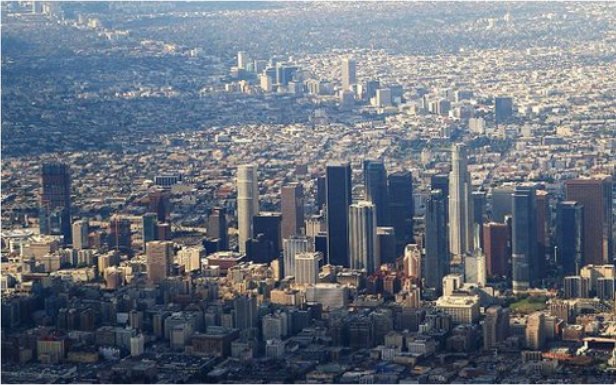 ALPERN AT LARGE--With issues from overdensification to homeless to transportation, we're no longer in the position to debate whether we can tolerate too much densification, inadequate health resources, a lackluster effort to reduce homelessness, and an unreasoned approach to border, economic and security policies.

Things keep evolving, and a "wokeness" and a drive for political correctness that dominated much of early 21st Century thought (and which pretty much shoved aside the lessons of the 20th Century) is being shredded to pieces with each day and week. The kids dominating our political and scientific debates are now being replaced by their elders...who perhaps new a thing or two all along.

Things we SHOULDN'T do are things we just CAN'T do anymore. And this experience with the Coronavirus pandemic will likely NOT be forgotten any time soon...or at least for the next generation.

1) President Trump just declared his Easter goal unrealistic for America to get back to normalcy, and April 30th has been chosen instead...for now.

And those of us who witnessed California Governor Newsom's thanks to President Trump's aid when the USS Mercy arrived in Southern California, and ditto for Governor Cuomo's own thanks in New York, it was a startling change from the blue/red political divide we've seen for decades.

Partisan bickering SHOULDN'T be tolerated, but now we just CAN'T do that reality TV show anymore. The Senate just unanimously passed a $2.2 trillion aid package with many unhappy partisan complaints (some with quite a kernel or two of truth to them). President Trump and our more well-behaving governors said nothing--and their political futures are now among the brightest.

2) The era of putting up with China's lies and obfuscation is OVER.

Americans of all political stripes are witnessing first-hand the health and economic costs of allowing this overly-secretive and lousy neighbor to achieve such powerful economic dominance. The blood on the hands of China's political rulership is blatant for all to see, and the argument that China is using to blame the United States for this crisis isn't being bought by anyone rational.

Britain, whose prime minister Boris Johnson has the COVID-19 virus, is infuriated and isn't buying into China's numbers of having "gotten over it". And the fury of Johnson and the UK's leadership is palpable, with a future reckoning certain to occur...perhaps starting with the abandonment of Britain's deal with the Chinese telecommunication company Huawei.

And the portion of the debt of the United States to China and Chinese investors? I'm surprised there isn't more talk of a reneging of that debt to help pay for the recent and future stimulus packages our nation will require to get back on its economic feet.

We SHOULDN'T put up the Chinese nation's secretive, cheating ways (and, by the way, the main reason we have the military crisis on the Korean peninsula after all these decades). But now, moving into the future, we just CAN'T. There's lots of pity to the Chinese people, but unless they change their government to become a global team player, they will suffer immensely, and more than anyone else.

3) The unrealistic goals of the "Green New Deal" are unattainable. They are also scientifically invalid.

If anyone wants to go with that moving forward, they do so at their own political risk.

The war on plastic bags and paper bags (all of which can be engineered to be more biodegradable)? Forget that. It was just another tax on living and meant to feed the egos of do-gooders and the pocketbooks of those standing to financially benefit from those taxing policies.

The war on the car? Well, I'm not the only one who vigorously fought for mass transit as an option in Los Angeles County, but I'm also not the only one who thought that buses/rail lines were mutually exclusive from the automobile...the latter of which is pretty darned good for social distancing.

Uber/Lyft, online working from home, and online school and college has its benefits--and the freeways are much lighter as of late for reasons that go way beyond fear.

Clean up the oceans, reduce our global population, and plant more trees...those are efforts by far more likely to improve humanity's footprint on our planet. Furthermore, they don't involve control freaks screwing things up for the rest of us who really DO care about our environment.

4) Urban and zoning policies in California and other cities must be focused on TRUE livability and affordability.

Social distancing does not support the SB50 and other California Legislature-passed/debated bills. Neither does quality of life or public health.

Ditto for SAYING we should build more housing but then PRICING them for anyone but the middle class. Urban infill and mansionization to extremes that leave the common man/woman to perish or be riddled with debt associated with the basics of living SHOULDN'T be tolerated.

But now we just CAN'T tolerate the ever-enlarging homeless encampments, the lack of REAL affordable housing, and overdensification without proper water, electricity, transportation and OPEN SPACE.

It was always a thing that we SHOULDN'T tolerate all this...but now we...just...CAN'T.

This terrible COVID-19 pandemic crisis is dreadful, but once we survive it--and most (but not ALL!) will survive it--then we need to make damn sure that what made this crisis so bad, and all of society's ills behind it, are fought back with reasoned and scientifically sound evidence and policies.

Truth was truth all along. Time to become "woke" to that.