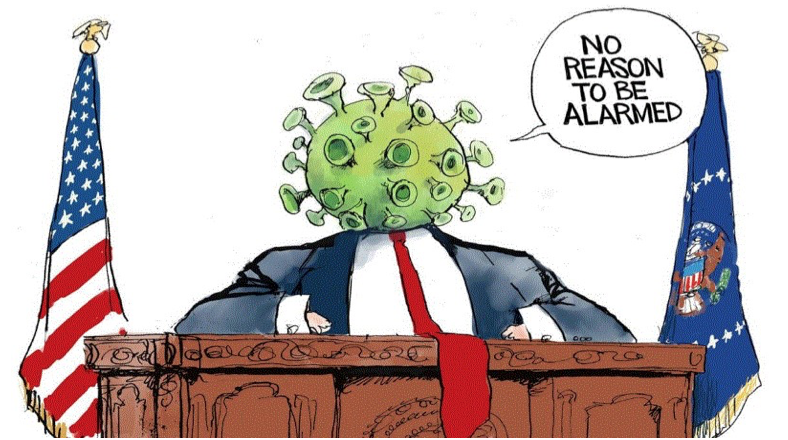 As Pogo advised us on the first earth day in April 1970, “We have found the enemy and he is us.” Fifty years later, we are needlessly spreading a deadly virus not because we could not have stopped the Covid-19 virus, but because we refused to stop a seriously mentally ill person from being President.

I wrote articles describing how Trump’s mental illnesses posed an unacceptable threat to the nation, advising in stark terms what a danger Donald Trump was to the entire world. Remember when Secretary of State Rex Tillerson told him in 2019, “You’re a fucking moron?”

Practically, the 25th Amendment and impeachment work in the same way. It has been called Nixonization. When a sufficient number of leaders of both parties agree that the President should be impeached or removed under the 25th Amendment, the leaders of both parties visit the President and show that they have definitively secured enough votes to do so. The alternative is resignation. Since Nixon wisely chose to resignation, this informal process has been termed Nixonization.

The time to Nixonize Trump was in January-February 2017 when everyone could see his delusional account of the number of people who attended his inauguration. The basis for removal, however, would have been based on a deeper understanding of the extreme danger that a narcissistic histrionic posed to the nation.

The reading of the tea leaves is that Nancy Pelosi, who had been demoted to House minority leader, knew that a mentally deranged President would be grossly incompetent and that would guarantee her return to power. Vice-President Mike (Silent) Pence, on the other hand, would follow policies which were antithetical to the Democrats, but he himself would not become a Twitter lunatic. There was no way Pelosi would allow the 191 House Democrats to support the 25th Amendment. (In Jan 2017, impeachment was not on the table as Trump had not done enough yet to be impeached.) The leaders of the moderate GOP feared a Trump presidency for the very reason Pelosi wanted to maintain it.

Without the support of the House Democrats, the then-moderate GOP had no option but to align themselves with the lunatic right wing of their party. A centrist government in which moderate Dems and the moderate GOP would freeze out either extreme was impossible without Pelosi’s cooperation.  The nation became further polarized so that the extremes of both parties came to wield disproportionate power in the belief that they could seize complete control of the government.

Covid-19 and the Culture of Cowardice

When the Covid-19 virus first appeared in Wuhan China, the world’s pandemic experts knew the need for immediate action.  While the Chinese government was initially disingenuous at first, the world’s leaders soon recognized that the pandemic would sweep the world unless action was taken.

Although President Trump had abolished the Pandemic Response team in 2018, that did not mean he had not been warned. By early to mid-January 2020 at the latest, Trump knew he had to use the Stafford Act to mass produce test kits, PPE, and perform other protocols. Instead, he spread the virus faster and farther by telling people it was a hoax and fake news.

A histrionic has limited mental capacity and Trump’s way of dealing with any analysis requiring more than three steps is denial. A histrionic must always be the center of attention, as Trump’s mad tweets have proved to us daily. Also, a histrionic must always be the hero receiving cheers, so Trump held rallies telling his followers not to worry. Calling something a hoax is denial; call something fake news is denial. Saying we can open up the nation by Easter is denial – this time, a seriously delusional denial that is killing tens of thousands of Americans. Trump’s saying it will magically wash away was a sign of serious mental illness. Yet, we did nothing to stop the real danger: Trump himself.

Nancy Pelosi and all Democrat leaders knew that the Pandemic was approaching, and that Trump was making it incalculably worse. They could have sounded the alarm, but they were silent. There was no equivalent of Paul Revere’s warning, “The Redcoats are coming, the redcoats are coming.” The Dem campaign strategy is clear: the worse things go for Trump, the better they go for Pelosi in November 2020.

Pelosi and other Dem (and GOP) leaders knew America would be devastated but they let the Pandemic happen. To what extent did Pelosi pressure Mayor Garcetti to be quiet until it was too late?  Maybe our grandchildren will find out.

We have become a nation of craven cowards who watch Trump say we should have the churches packed by Easter despite the fact we could have well over 100,000 dead by Easter and his opening up of America could push deaths beyond one million. When a few brave governors like Newsom and Cuomo as well as LA Mayor Eric Garcetti warn of Trump’s deadly false information, he demands “appreciative governors.” A nation of the brave and free should have instantly repudiated Trump’s implied threat against millions of Americans, but instead virtually everyone kowtowed to him.

(Richard Lee Abrams is a Los Angeles attorney and a CityWatch contributor. He can be reached at: Rickleeabrams@Gmail.com. Abrams views are his own and do not necessarily reflect the views of CityWatch.) Image: NY Daily News. Edited for CityWatch by Linda Abrams.