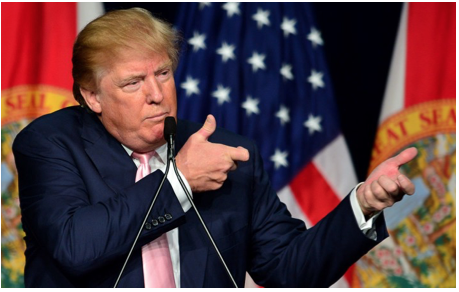 TRUMP WATCH-An elderly elephant with a blond pompadour inhabits the Oval Office. The elephant is not the physical being of Donald Trump but rather his unbalanced mental health. Trump is mentally unstable in a fashion and to a degree which is properly characterized as mentally ill. As often occurs with elephants in the room, the nation has refused to deal with this looming nightmare. An intervention is long overdue.

As a society, we are still evolving a way to categorize human behaviors and presently our best system is the Diagnostic and Statistical Manual of Mental Disorders version #5, called DSM-5. The DSM-5 does not purport to explain the origin or treatments for the majority of mental disorders, but rather it is society’s attempt to describe commonly seen behavior patterns. As the product of sixty-five years of professional efforts to make sense of human behavior, it provides a common language to describe people like Donald Trump.

The Goldwater Rule says that it is unethical to provide diagnoses of public figures without their consent and conducting a personal interview. The rule arose after the Presidential Campaign of 1964 during which over one thousand mental health professionals publicly stated that candidate Barry Goldwater was mentally unfit to be President. Although the Goldwater Rule applies only to psychiatrists, it has had a chilling impact on the entire mental health field.

If Barry Goldwater did have a mental illness back in the early 1960s, we had no standardized means to diagnosis it. Although the DSM was created in 1952, it was still rudimentary by 1964. In the intervening decades, however, untold thousands of professional man-hours have gone into the various incarnations of the DSM, and there is now a much sounder societal basis for its diagnoses.  Thus, the state of diagnosis in 2017 is entirely different. We certainly would not forbid surgeons to use medical procedures developed after 1964. Yet, the Goldwater Rule implies ignoring the advances in the field of mental health of the prior six decades.

The requirement for gaining the person’s consent is legally absurd. Consent arises within the context of the physician-patient relationship. So, if a diagnostician has no relationship with a public person, there is no rational reason for that public figure to give consent.

Some Diagnoses Can Be Given Without a Private Interview

The idea that professionals cannot diagnosis people without personal interviews is an outdated concept. The profession needs to recognize that some mental illnesses can be diagnosed from a distance.

Personality Disorders, as a subgroup of Mental Disorders, can often be based on the patient's observable actions. While the private statements of the person may be helpful, they are not as crucial.

Trump’s Disorders Do Not Require a Private Interview

Trump’s mental troubles are publicly visible – everyone sees his behavior. A person with a Histrionic Personality Disorder (DSM-5, 301.50) uses unnecessarily dramatic statements. People with this disorder are often quite flirtatious or seductive with sexually inappropriate behavior, and they like to dress in a manner that draws attention to them. Histrionics can be flamboyant and theatrical, exhibiting an exaggerated degree of emotional expression.

As Trump shows, histrionics have a compulsion to be the center of attention. When he visited Texas after Hurricane Harvey, Trump had the crowd shouting, “USA, USA, USA” before proclaiming, “Thank you, everybody,” as he sported one of the white "USA" caps that are being sold on his campaign website for $40. "I just want to say: We love you. You are special…what a crowd. What a turnout."

Most disturbing is his histrionic use of generic terms. “Dramatic, impressionistic speech that lacks detail” is a diagnostic feature of a histrionic. Trump’s habitual use of general terms reflects an intellectual inability to grasp details and nuances. One sees this problem when he lapses into incoherence. Trump’s failure to find the specific words needed to convey details and his inability to stick to a train of thought reveal an alarming cognitive deficit. He appears at the extreme end of the histrionic spectrum in this regard.

Trump, during a July 19, 2017 interview with the New York Times stated: “I don’t really know.…But in that time. And don’t forget, Crimea was given away during Obama. Not during Trump. In fact, I was on one of the shows, I said they’re exactly right, they didn’t have it as it exactly. But he was — this – Crimea was gone during the Obama administration, and he gave, he allowed it to get away. You know, he can talk tough all he wants, in the meantime he talked tough to North Korea. And he didn’t actually. He didn’t talk tough to North Korea. You know, we have a big problem with North Korea. Big. Big, big. You look at all of the things, you look at the line in the sand. The red line in the sand in Syria. He didn’t do the shot. I did the shot. Had he done that shot, he wouldn’t have had — had he done something dramatic, because if you remember, they had a tremendous gas attack after he made that statement. Much bigger than the one they had with me.”

We need to face the reality. In addition to lapsing into incoherence, Trump relies on generic, simplistic mono-syllabic words, “big,” “sad,” “great,” “Fake News” as well as on one of his favorite two syllable words, “very,” and “very, very, very.”

The most distinguishing features of Trump’s Narcissistic Personality Disorder are (1) his grandiose sense of self-entitlement and (2) his narcissistic rages. Trump’s belief that he may do whatever he wishes since he is President is a constant problem. His using his position to help Ivanka’s businesses, his charging the government for staying at his own resorts and his refusal to separate himself from his business interests all show that he has a pathological sense of entitlement. He believes he can do what no other President has been permitted to undertake.

Persons with Narcissistic Personality Disorder tend to be very thin skinned and fly into a rage when contradicted. No one is free from Trump’s Twitter storms, be it Kim Jung-Un with his nuclear weapons to Trump’s own Attorney General, Jeff Sessions. (See DSM-5, 301.81 for all criteria of a narcissist.)

Trump also shows traits of paranoia – systematic delusions of persecution and/or grandeur. He says that Fake News is out to get him since he is making America Great Again. Paranoia, however, can pop up in a variety of other mental disorders and hence, his paranoia does not necessarily mean he has a Paranoid Personality Disorder.

Time for The Public’s Education

Although professionals like to claim exclusive control of their own fields, the public needs to charge into mental health. As voters, we are called upon to pass judgment on the mental health of thousands of people each year, and yet we allow ourselves to be cowered by “professionals.” They have proven abject failures when it comes to mental health and politics. At one time, religious authorities wanted to hog the religious texts, but those days are gone for many religions. At one time, there was no notion of “We the People,” but only of the Divine Right of Kings. The time has arrived for the public to master the concepts of mental health. For the sake of our country, the public should learn more about the DSM-5 and its diagnostic categories.