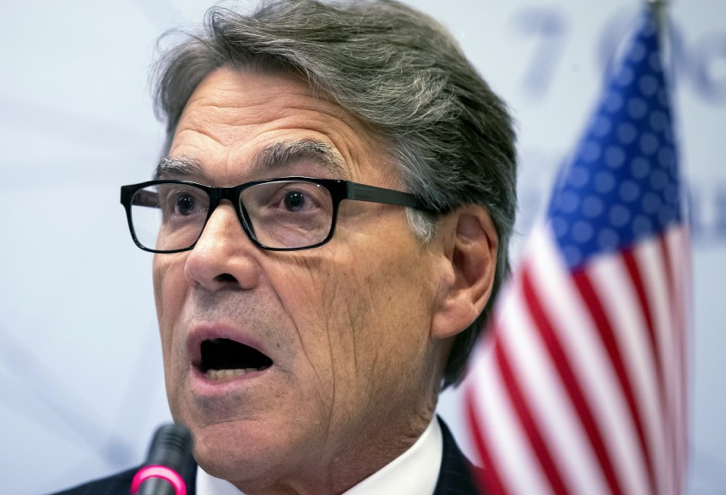 GELFAND’S WORLD--As CNN reports, “All four White House officials who are scheduled to give depositions on Monday during the House’s impeachment inquiry won’t show up, as a source with knowledge of the situation tells CNN that National Security Council lawyers Jon Eisenberg and Michael Ellis will not testify.”

“The two officials will join Robert Blair, assistant to the President and senior adviser to the acting White House chief of staff Mick Mulvaney, and Brian McCormack, associate director for natural resources, energy & science at the office of Management and Budget, in not testifying on Monday, CNN reported earlier. Energy Secretary Perry, who was scheduled to appear Wednesday, will not participate in a closed door deposition, an Energy Department spokesperson said Friday.

The proper action for the House to take is to impeach them all.

Impeach Blair, Perry, McCormack, Barr, and Mulvaney for sure, and give the others one week to comply or to be impeached themselves.

What other remedy is there for defying legal subpoenas which the House is empowered to send under its Constitutional authority? So far, the House and the press have been treating such refusals as an acceptable part of the day to day struggle between the president and the congress, with the president hiding behind an extremely broad interpretation of executive privilege. It’s time for the House to stop making this mistake, and start making clear that all civil officers including cabinet officers are required to cooperate with Constitutionally legal demands.

There may be some few demands involving national security which should be excused, but as of now, the weight of the evidence suggests that Adam Schiff’s committee is doing more to defend national security than the cabinet officers or the president himself.

Legally, can the congress do this?  Yes they can.  As the Ballotpedia article explains, the Constitution extends the impeachment power over all civil officers in the federal government, and this certainly includes cabinet secretaries and their immediate appointees.

Has a cabinet secretary been impeached at any time in our history? Actually yes, as the above linked article details.

There is a clear process of obstruction going on in the executive branch, and those who are engaged in it should be called out on their actions. By now, there isn’t any doubt that the crime of obstruction of justice falls under the term “high crimes and misdemeanors” and is an impeachable offense. Let the House of Representatives escalate this battle to include all those who are hiding behind the president’s bluster. It’s time to call the bluff.

May I suggest that the impeachment hearings being carried out by the House of Representatives be vastly expanded in scope even though this will take at least several months?

And now, Trump has threatened to cut off fire-based disaster aid to California because of our allegedly bad forestry practices. This, in spite of the fact that some 19 million of those acres are actually managed by federal agencies such as the National Park Service. California’s governor responded to the latest Trump threat by pointing out that Trump doesn’t even acknowledge the existence of global warming and its effect on the outbreak of fires.

Might I suggest that Trump’s threat should be added to the list of offenses that will be drawn up in the prospective bill of impeachment. After all, the president would be getting pretty close to a high crime by failing to protect all of the people and all of the states according to the legal systems we have created by law.

If nothing else, the threat of developing a count of impeachment might be a little bit of hardball to counter the president’s standard tactic of bullying and insulting. The easiest way for Trump to avoid having a full day of impeachment hearings on his forestry practices would be to back off on the threats.

There have been many high crimes

The House of Representatives shouldn’t let Trump’s prosecution slide by with only the Ukraine story. Sure, it’s massive extortion and solicitation of bribery, and more importantly in the large scheme of things, it is giving aid and comfort to the Russian occupiers.

But there are lots of other major items that should be viewed as high crimes and misdemeanors, and these shouldn’t be left out of the bill. For example, the recent ceding of Kurdish territory – doing a big favor to Putin – ought to be paraded on national television in one of the upcoming impeachment hearings.

Remember the Helsinki embarrassment? It needs to be discussed openly in the same forum.

Congressman Adam Schiff has pointed out repeatedly that the Mueller inquiry began as a counterintelligence investigation. From the very beginnings of the Trump administration, there have been legitimate questions about whether Trump is owned, partially or wholly, by Putin. The fact that Trump has complained about the investigations over Russian influence are a pretty good indication -- knowing Trump’s propensity for blaming his opposition for what he himself is most guilty of – that Trump’s debt to Putin is something that we should be talking about.

There’s one other item that Talking Points Memo reminds us about. Trump’s chronic ongoing sabotage of Obamacare should be treated as another count in the bill of impeachment.

One high ranking Democrat mentioned a concern that Trump might go as far as provoking a governmental shutdown in order to prevent the impeachment process from going on. This by itself, were it actually to happen, should be another violation of the oath of office that, by itself, would be an impeachable offense. It might even be a high crime bad enough to drag a few Republican senators over to the side of sanity.

And why isn’t the House taking up the emoluments issue in its own right? The use of the United States government as a method for sucking up dollars from foreign governments through hotel fees is obvious and outrageous. This is in addition to using the military and State Department to make payments for the use of Trump’s overseas properties such as the one in Ireland. These are also impeachable offenses.

From the political perspective

It’s become terribly obvious that there is a propaganda war going on between truth tellers such as the New York Times and the right wing noise machine championed by Fox and by talk radio. It’s been demonstrated by journalists who have investigated the right wing carefully that there is a political and intellectual bubble that a lot of people live in. They take their opinions and political marching orders from Fox. The ability of the right wing news vendors to pass along the day’s party line is regrettably effective.

But an extended series of impeachment hearings carried out in a fully public space is something that Fox and talk radio cannot prevent from happening. They can protest and they can spin, but they cannot keep the American people from at least hearing the facts and the arguments.