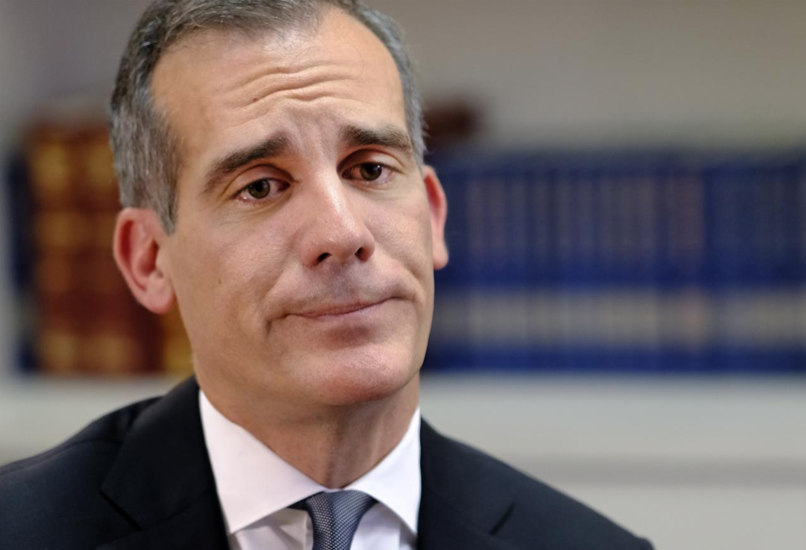 @THE GUSS REPORT-The saying “a fish rots from the head” certainly applies to LA on Mayor Eric Garcetti’s watch.

His and his administration’s corruption is paralleled only by their dishonesty.   Stunningly, he is worse at the job than his predecessor, Antonio Villaraigosa, and may actually be the worst alcalde in LA history, at least for those who judge such things based on results and quality of life.

Before we wade back into City Hall corruption, let’s address Garcetti’s attempt last week to wordsmith himself away from blame for LA’s medievally diseased and filthy condition. His pathetic mea culpa read, “As your mayor, I take full responsibility for our response to this crisis.”

See what Garcetti did there? He accepts responsibility for things moving forward but not for making conditions exponentially worse than when he first took office.

Also consider that Garcetti wrote that these problems are the “product of decades of failure.”

You see, this July 1 marks Garcetti’s 18th year in elected office in City Hall. Five of those years, he was on LA City Council representing just the 13th District. For six more years, he was City Council president and in complete control of the agenda, making him responsible for all policies and outcomes which marinated into today’s noxious stew. And he has been mayor for the most recent six years.

That’s 18 years in the clown car, including 12 years behind its steering wheel.

How did that work out?

God help us, he has several more years remaining.

During his Council president days, Garcetti repeatedly squelched public criticism by ejecting from scores of meetings his most vocal critics, including Venice street artist and gadfly David “Zuma Dogg” Saltsburg. Like an oracle, as far back as 2006, Zuma Dogg continually warned that Garcetti’s shady land development deals would result in more and more homelessness.

Before you check out this particular clip, keep in mind that it is too easy to dismiss Zuma Dogg as a broken clock being right twice a day. Dogg, and his observant button-pushing pals of the time (Matthew Dowd and Michael Hunt), went to hundreds of Garcetti-led meetings and made this and other observations thousands of times.

Speaking of Garcetti’s intellectual dishonesty, do you remember the time and money he and LA City Council squandered pursuing a DTLA football stadium, and Councilmember Tom LaBonge moronically hurling a football across City Council chambers in another apparently inebriated-at-work moment? Do you recall what Garcetti did after the little engine that could – the tiny neighboring City of Inglewood – landed its multi-billion dollar stadium, the jobs to build it, the NFL, concerts, conventions and the Super Bowl tentatively scheduled to be played on February 6, 2022?

Garcetti went out and quickly posted videos essentially proclaiming: We did it! We brought the NFL back to LA!

Once again, we shout bull-effing-shiite.

The LA to which Garcetti referred is the County of Los Angeles, of which he has never been an elected official. He is the Mayor of the City of Los Angeles, one of 88 cities in the County. His bogus claim was his way of duping people into thinking that the time and money he squandered was actually a win. It’s bad enough that he did that. It’s worse if he really believed it. Ultimately, the stadium’s plaque will deservedly have the name Mayor James Butts on it. If Butts did anything illegal to win, the legal system will take care of it. Inglewood still got the stadium, the NFL, the revenue and all that goes with it, good and not so good.

It’s amazing how much of a writer’s word count can be eaten up doing an intro on Eric Garcetti’s dishonesty. With what remains, let’s dig into just one sliver of Garcetti’s corruption.

Back in January, I submitted a California Public Records Act request for all City of LA business matters residing in a specific personal email account belonging to Garcetti, as well as that of Herb Wesson, who is Garcetti’s disastrous successor as LA City Council president. (We’ll get back to Wesson’s personal email account at another time).

My request put Garcetti’s taxpayer-funded lawyers in a bind because they know I am already in possession of some of that content, but they don’t know how much or the subjects they address.

That may be why month after month his lawyers email me that they need more time to respond. But how can that be? They just need to have Garcetti open that email account, search for “City of LA” and other keywords that will make years of hidden emails surface in an account designed to hide critical information from the public.

Their most recent deadline to respond was last Friday, June 14. I expect another “Dear Mr. Guss” delay any day now. But rest assured, I am forcing those documents to the surface through other channels.

Is there a crack pipe nearby?

Eighteen years into Garcetti’s gig and the Smell Segundo Times keeps trying to re-brand Garcetti as anything other than a colossal failure.

While City Hall insiders report that Smith is trying to find out more about my public records requests, I’d have been glad to clue her in, except that she historically failed to give due credit for information she requested of, and received from, this column and then used.

Darn. We haven’t even gotten to this week’s yum-yum inside City Hall chaos. Let’s wrap with this brilliant political cartoon. It applies to LA just as well as SF.