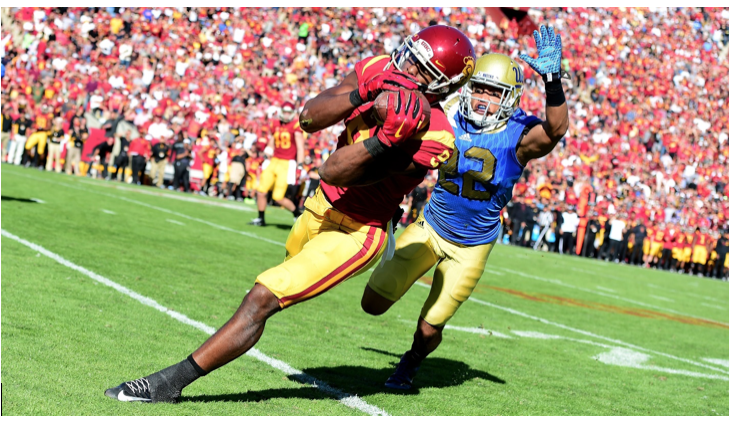 SPORTS POLITICS--On the basketball court, Ed O'Bannon never made a huge name for himself.

After playing for the University of California–Los Angeles Bruins he spent two years in the NBA in the mid-1990s before finishing his career in Europe. But whatever stardom he never reached on the court, he is now reaching in the courtroom.

In 2014, O'Bannon successfully sued the NCAA for conspiring to appropriate players' names and likenesses for commercial gain. Specifically, he proved that the National Collegiate Athletic Association had collaborated with a commercial game maker to produce basketball and football video games using players' images without permission or payment. When all the accounting was done, 29,000 college athletes had good reason to send O'Bannon a thank you note: They each received about $7,200 a piece.

Today that signal legal victory is poised to disrupt the entire concept of amateurism in college sports—something that O'Bannon has spent over a decade fighting to achieve—as well as the NCAA's iron-fisted regulation of "amateur" status. According to the NCAA's amateur certification, student-athletes may not receive payment for their performance, employ a recruiting agency or scouting service, receive funds to offset training costs, or endorse a commercial product. O'Bannon's landmark 2014 case became the foundation from which California Senators Nancy Skinner and Steven Bradford introduced SB-206, known as the "Fair Pay to Play Act," in February of 2019.

That act proposes to amend California's Education Code by prohibiting California's 24 public colleges and universities with Division I athletes from denying student athletes compensation for any use of their names, images, or likenesses—as the NCAA rules currently do. It would also, according to University of New Hampshire law professor Michael McCann, who co-authored Court Justice: The Inside Story of My Battle Against the NCAA with Ed O'Bannon, allow these student athletes "to sign endorsement deals and licensing contracts."

The bill does not endorse what the NCAA has most deeply opposed for a long time: general salary-like payments for all college athletes.

Skinner proposed the measure to enhance the educational and economic interests of college athletes who, as many have noted, drive alumni donations and wear corporate logos. "These students are being exploited," she said, adding that the bill "will help relieve the financial pressure on young athletes to quit school and turn pro before they've completed their degrees."

The bill also stands to be of particular help to female athletes. Top female athletes do not have the same earning potential as male athletes when they turn pro. As McCann explains, "Their ability to sign endorsement deals and licensing contracts without jeopardizing their NCAA eligibility could prove valuable and, many would argue, morally fair."

On May 22nd, the California senate passed the bill 31–5. It now sits in the California Assembly and, if it passes there, will go to Governor Gavin Newsom for his signature. Both prospects seem likely to happen. If the bill passes, the end of amateurism in California's college sports would begin on January 1st, 2023.

Exactly how the Fair Pay for Play Act will impact NCAA athletes across the rest of the country, if passed in California, is an open question. According to a spokesperson from the University of California Office of the President, there is hope that policy changes in California will create a "level playing field" across all intercollegiate athletic conferences—in other words, that the NCAA will choose to universalize the amendment.

McCann says that "the NCAA's response will depend on which voluntary actions, if any, the NCAA takes over the next couple of years with respect to athletes' names, images, and likenesses in commercial projects." Skinner, for her part, anticipates opposition from the organization.

Notably, though, a week before the state senate approved the bill, the NCAA convened a group of athletic directors, university administrators, and student athletes to, according to Big East commissioner Val Ackerman, "examine the NCAA's position on name, image, and likeness benefits and potentially propose rule modifications tethered to education."

McCann suggests that the NCAA might very well recognize that, despite SB-206's refutation of NCAA amateur oversight, there are aspects of the bill that are advantageous to the association, like the fact that the legislation does not call for college athletes to receive salaries. In this respect, SB-206's potential authorizing of trusts for athletes to access after graduating—which was the result of O'Bannon's 2014 case—represents a possible and viable compromise.

The California Assembly sent to the bill to committee in early June. A vote should take place this summer.

(James McWilliams is a Pacific Standard contributing writer, a professor at Texas State University, and the author of Just Food: Where Locavores Get It Wrong and How We Can Truly Eat Responsibly and a Revolution in Eating. This piece was posted first at Pacific Standard.)