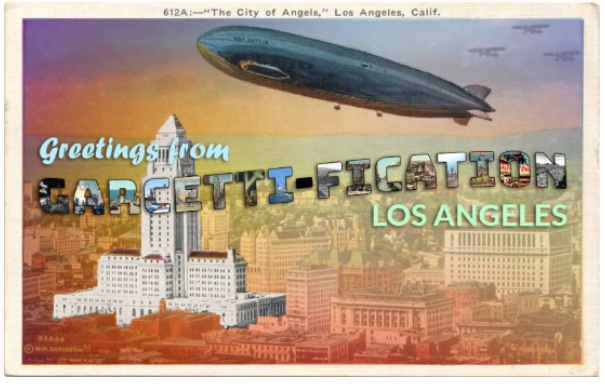 SPECIAL REPORT-Housing Is A Human Right has released a sweeping investigative report about government-sanctioned gentrification in Los Angeles. Mayor Eric Garcetti stands at the center of this important exposé.

As the second largest city in the United States, the largely untold story about L.A.’s devastating gentrification crisis is a must-read cautionary tale for the rest of the nation. The following excerpt is the opening section of “The Garcetti-fication of Los Angeles: A Gentrification Cautionary Tale.”

Los Angeles as a Cautionary Tale

Outside Los Angeles City Hall, on an overcast summer evening in 2017, Mayor Eric Garcetti stood on a blue-carpeted stage, flanked by City Council members, and smiled broadly. It was a big day. In front of several thousand people, with a right hand raised, Garcetti had just been sworn in for a second term as mayor of the nation’s second largest city. AECOM, a multinational engineering firm, and Westfield Property Management, a global real estate company, each contributed $50,000 to help pay for the high-powered ceremony. In the audience, Garcetti’s political patrons stood clapping, many of them snapped pictures. The mayor acknowledged the crowd with a quick thumbs up, and then launched into a florid, 20-minute speech. 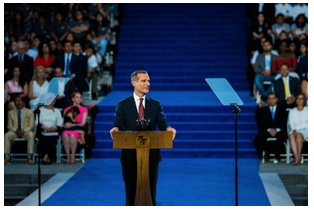 Eyeing a teleprompter, Garcetti spoke grandly. LA, according to the mayor, was now “freer, safer, prouder.” The public’s faith in LA government had been restored. The self-centered, self-serving culture at City Hall had been changed. Homelessness and rising rents were problems, he acknowledged, but building up LA would provide many solutions, making “our dreams” come true. “Los Angeles,” Garcetti said with a grin, “we are builders, and we have begun that work -- and we mean to keep at it.” It was perhaps the most accurate claim in his entire inaugural address.

Of all the promises Garcetti had uttered over the years, unleashing a tidal wave of high-end development was the one pledge he had most made good on. By repeatedly indulging in a controversial practice known as “spot zoning” -- ignoring the city’s land-use regulations and then approving developers’ requests for general plan amendments, zone changes, and other entitlements -- Garcetti and the City Council had turned L.A. into a lucrative paradise for real estate investors and developers, where they could construct anything they wanted, wherever they wanted.

“The planning process in the city of LA has gotten out of balance,” former L.A. City Planning Commissioner Mike Woo told the Los Angeles Times in 2017. “There shouldn’t be so many requests for discretionary decisions moving through the system.”

With spot-zoning approvals in hand, upscale developers such as Colony Holdings, Kanon Ventures, Carmel Partners, and Merlone Geier Partners were free to build immense luxury-housing complexes in middle- and working-class neighborhoods in Koreatown, South L.A, and the San Fernando Valley, where a chain reaction of skyrocketing rents, displacement, and gentrification would undoubtedly explode.

It was as if City Hall had reverted to a Wild West outpost, where deep-pocketed developers with high-priced lobbyists routinely shelled out campaign cash to the mayor and council members while the politicians returned the favor with spot-zoning approvals—a sketchy arrangement known as “pay-to-play.” In 2019, an FBI corruption probe, which first focused on L.A. Councilman and Planning and Land Use Management Committee Chairman Jose Huizar and then expanded to other government officials, would rock City Hall.

(Download the full report: The Garcetti-fication of Los Angeles: A Gentrification Cautionary Tale.)

During Garcetti’s first mayoral term, glass-and-steel luxury-housing towers and gigantic, market-rate apartment complexes started to pop up all over L.A. -- and developers and real estate investors, who had contributed millions in campaign cash to Garcetti and City Council members over the years, were raking in billions. By 2018, L.A.-area renters shelled out a staggering $40.4 billion to keep roofs over their heads. Curbed LA, a real estate site, noted, “By comparison, that’s more than 423 of the companies on the most recent Fortune 500 list earned in yearly revenue.”

Garcetti’s “build, baby, build” agenda was eagerly embraced by City Council President Herb Wesson, Councilman Huizar, and nearly all of the other council members. But it wasn’t executed without devastating consequences. The mayor didn’t use his inauguration to go into the disastrous details, but housing justice and tenants’ rights groups knew what was happening. Even City Hall databases, created by the mayor’s “innovation team,” showed what was emerging. Middle- and working-class Angelenos, particularly people of color and immigrants, were getting slammed by a citywide gentrification crisis. And with that came soaring rents, record-high evictions, unwanted displacement, and sudden homelessness. People’s worlds were collapsing—and a humanitarian crisis was unfolding.

“Los Angeles has proven that it is not yet able to practice development without displacement,” the Los Angeles Tenants Union declared 2017. “Imagined housing construction of the future relies on today’s practices of mass eviction and harassment.”

By the end of 2017, the median rent for a one-bedroom in LA was a whopping $2,200, ranking the city sixth among the top 10 U.S. metropolises with the highest median rents. Between July 2013 and July 2017, during Garcetti’s first term in office, landlords utilized a little-known state law, the 1985 Ellis Act, to evict tenants in 4,869 rent-controlled units, according to the Coalition for Economic Survival and Anti-Eviction Mapping Project. With an average household size of 2.8 persons in LA, that’s at least 13,633 people who were forced out of their homes.

Overall, the LA Times found that between 2001 and 2016, a stunning 20,000 rent-controlled units had been yanked off the market. “Looking to cash in on a booming real estate market,” the Times reported, “Los Angeles property owners are demolishing an increasing number of rent-controlled buildings to build pricey McMansions, condos and new rentals, leading to hundreds of evictions across the city.”

From 2016 to 2017, L.A.’s homeless population spiked by 16 percent: 33,138 men, women, and children were living on the streets -- and homeless advocates believed the real number was much larger. The Los Angeles Community College District, for example, found that 19 percent of its 230,000 students had been recently homeless in 2017. Even worse, more than 1,200 homeless people had died on the streets of LA County between 2017 and 2018.

Gentrification was ravaging Los Angeles—in 2018, the Downtown L.A. ZIP code 90014 was ranked by RENTCafe as the most gentrified neighborhood in the entire nation. And Garcetti and the City Council, through their backroom land-use policies, were aggressively fueling it. They were, in fact, engaging in government-sanctioned gentrification. It was something the media often overlooked, and many Angelenos didn’t fully understand.

In LA, and other U.S. cities, younger people looking for a cheap neighborhood to live are no longer the underlying force in gentrifying middle- and working-class communities. The media still frames gentrification that way, but noted scholars, such as the late Neil Smith, the prominent anthropology and geology professor, think that’s outdated. Smith and author Peter Moskowitz, who wrote the well-regarded book How to Kill A City: Gentrification, Inequality, and the Fight for the Neighborhood, argue that developers and real estate investors are now leading the gentrification charge.

“To explain gentrification according to the gentrifier’s preferences alone,” Smith wrote in his landmark book The New Urban Frontier: Gentrification and the Revanchist City,  “while ignoring the role of builders, developers, landlords, mortgage lenders, government agencies, real estate agents—gentrifiers as producers—is excessively narrow. A broader theory of gentrification must take the role of the producers as well as the consumers into account, and when this is done it appears that the needs of production—in particular the need to earn profit—are a more decisive initiative behind gentrification than consumer preference.”

Lured by favorable local and state government policies such as tax subsidies, zone change approvals, and entire rezoning of neighborhoods, developers and real estate investors jump into inexpensive urban areas before younger people gentrify a community—after all, properties will be less expensive. Developers, with the help of local and state politicians, then fire up gentrification themselves with their luxury-housing complexes and top-dollar rents. Other landlords in the neighborhood invariably follow suit, jacking up rents—one way or another -- at their apartment buildings.

“The policies that cause cities to gentrify are crafted in the offices of real estate moguls and in the halls of city government,” Moskowitz writes in How to Kill A City. “The coffee shop is the tip of the iceberg.”

The author could have added the corridors of state government. In late 2018, California State Sen. Scott Wiener introduced SB 50, a statewide, real estate deregulation bill that housing activists fear will worsen gentrification crises in cities. Activists have long been wary of Wiener, who relies heavily on campaign contributions from developers, landlords, and other real estate players to get elected and stay in power. He consistently pushes a “trickle-down,” luxury-housing agenda, spinning it as a way to address California’s housing affordability crisis, although Big Real Estate stands to gain the most benefit. Despite activists’ gentrification fears, although not surprisingly, Garcetti seems amenable to Wiener’s legislation.

But the battle over SB 50 was more than a year away. At the end of his inauguration speech, as the sky grew dark, Garcetti boasted that Los Angeles is a “paradise.” In truth, the nation’s second largest city had become a high-profile cautionary tale about modern-day gentrification in California and throughout the United Street -- and how politicians vigorously push it through. It’s a story that took place over years and often behind closed doors but can no longer be ignored. Too many lives -- in LA and across the country -- hang in the balance.

(Patrick Range McDonald is the special investigator for Housing Is A Human Right, the housing advocacy division of AIDS Healthcare Foundation. He was a longtime staff writer at LA Weekly, where he won the Los Angeles Press Club's "Journalist of the Year" award and the national "Public Service" award from the Association of Alternative Newsmedia.)