MIRACLE MILE MESS-While all eyes were on Peter Zumthor’s controversial design for a new museum spanning Wilshire Boulevard, little attention has been given to LACMA’s plan to construct a five-story parking facility (rendering above) on the residential block of South Ogden Drive to replace their existing surface parking lot on the southeast corner of Wilshire and Spaulding.

As part of the new museum project, LACMA intends to build a five-story parking structure with two levels of underground parking at 715-731 South Ogden Drive, on a densely populated residential street. The garage would accommodate 260 vehicles and would be 55-feet high, not including a 10-foot elevator shaft and 20-foot lighting poles rising above the rooftop parking level.

“LACMA’s plan to build a parking garage on parcels currently zoned only for redevelopment as multi-family buildings is outrageous,” said MMRA Vice President Ken Hixon. “This would be a massive intrusion into our community and unleash a slew of problems for residents from increased traffic to noise and light disturbances – not to mention air quality impacts.”

“It will also undo nearly 20 years of city planning and city ordinances which codify the need to preserve the residential character of the Miracle Mile while allowing for smart, dense growth along Wilshire Boulevard,” Hixon said.

On May 14, 2019, the general board of Mid City West Community Council supported the MMRA’s position. The Council adopted a motion opposing the construction of the Ogden garage and recommended that the location must be used for what it is currently zoned for: affordable housing. 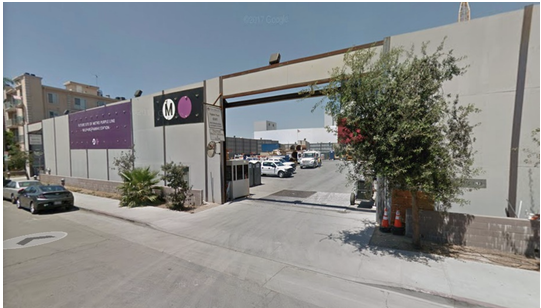 Also on May 13, 2019, Fix The City filed a lawsuit asserting that Los Angeles County violated California Environmental Quality Act (CEQA) guidelines in preparing the LACMA Final Environmental Impact Report (EIR) by not properly evaluating how the parking demands of the adjacent Purple Line subway portal would displace parking that LACMA is required to provide at the proposed Ogden garage.

The location of the proposed Ogden garage is currently being used for construction of the Wilshire/Fairfax subway station. (photo above)

The lawsuit suit states that the EIR fails to adequately consider the impacts of providing insufficient parking at the Ogden garage. LACMA is required by city code to provide 215 parking spaces for the Academy Museum, BCAM, and Resnick Pavilion at the Spaulding lot – which they are now trying to transfer to the proposed Ogden parking garage with 260 parking spaces.

But because the new Metro subway stop at Orange Grove will attract approximately 238 “park and ride” commuters daily, LACMA’s proposed parking structure will become a magnet for competing users. The combined demand for LACMA and Metro parking will quickly outstrip the supply of mandated LACMA parking and send drivers circling around the Miracle Mile in search of parking. Fix the City’s suit asks the courts to set aside the EIR for the Project until the County certifies an EIR that complies with CEQA.

“The MMRA is grateful to Mid-City West Community Council for their support and to Fix the City for taking legal action on the EIR,” said Hixon.

Although the proposed garage raises many complex issues regarding zoning and environmental impacts, Hixon maintains that it all boils down to one simple question: “Who would want a five-story parking garage built next door to their home, condo, or apartment?” 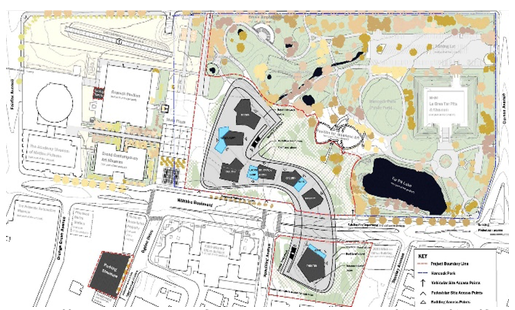 Fix The City vs. County of Los Angeles; Writ of Mandate and Complaint for Injunctive and Declaratory Relief

More Housing or a Parking Garage? 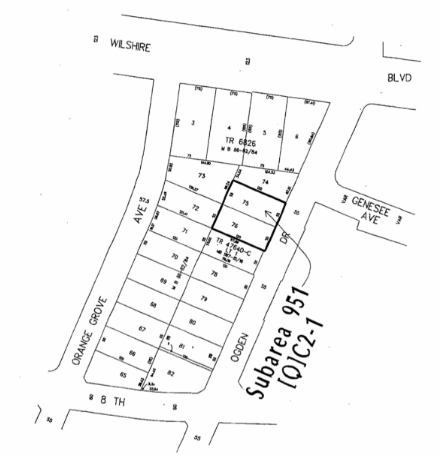 Parcel map of South Ogden Drive. The proposed Ogden garage would be built on Lots 74, 75, and 76.

When the Wilshire Community Plan Update (WCPU), which was approved on Sept. 19, 2001, was being developed the Planning Department and the Miracle Mile community faced a dilemma: What to do about the many surface parking lots behind the commercial buildings on the north and south of Wilshire Boulevard – such as the surface parking lot behind the now demolished office building on the southwest corner of Wilshire and South Odgen Drive, where LACMA now wants to construct a five-story garage?

Inspiration for a solution was found in the consensus of the stakeholders and city planners that the major objective of the updated community plan would be to increase multi-family housing in the Miracle Mile.

An elegant and effective remedy was devised. All surface parking lots and parking buildings in the Miracle Mile existing at that time were grandfathered into the WCPU as conforming uses, including Lots 75 and 76 (two of the three lots where the Ogden garage would be located), but their future redevelopment would be limited to residential uses.

This was done by placing special zoning restrictions on these parcels called Qualified [Q] Conditions. This action served to promote an increase in new housing and to protect South Ogden Drive and the rest of the Miracle Mile from commercial intrusion. 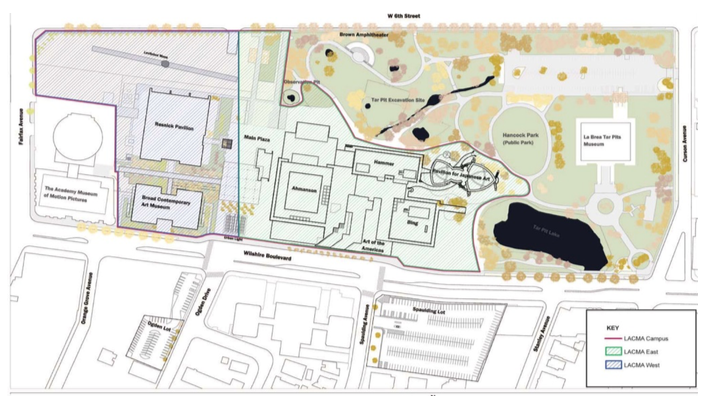 The construction of the proposed Ogden Garage would completely contradict the goals of the WCPU as it pertains to the Miracle Mile, which was the product of public hearings and comprehensive public input. This structure would boldly defy a central tenet of the WCPU – which was to provide additional housing for projected population increases and to provide proper transitions from higher to lower density in residential areas.

The CDO specifically incorporates by ordinance the [Q] Conditions on Lots 75 and 76 that limits their redevelopment to R-3 zoned multi-family residential uses only.

LACMA’s Final Environmental Impact Report (EIR) is filled with inaccurate and misleading information regarding the land use regulations on the Ogden parcels. LACMA maintains that the proposed parking garage is “consistent with the use permitted” by the [Q] Conditions on these lots. That it is simply not true. The lots are not zoned for parking buildings.

LACMA states the proposed parking structure “would comply with the permitted heights established in the LAMC.” That, too, is not true. Lots 75 and 76 can only be redeveloped as R3 multi-family residential buildings, which would be limited to 45-feet. The proposed garage would be 20-feet higher.

LACMA maintains that existing [Q] Conditions on Lots 75 and 76 specifically identify parking as a permitted use on the Ogden Lot. That is true only for an existing surface parking lot. The construction of a parking building is not permitted by these [Q] Conditions.

LACMA casually sweeps aside the Miracle Mile CDO by stating that “the Project is substantially consistent with these CDO guidelines and standards,” ignoring the fact that the [Q] Conditions on Lots 75 and 76 were incorporated into the CDO. Hence, their use of these lots to construct a parking building not only violates existing zoning but the CDO, too.

In the EIR, LACMA claims – with a straight face – that “the addition of the Ogden Parking Structure would not have an adverse impact on the residential character of its surrounding neighborhood.” This defies common sense. The Ogden garage would be the very definition of something that would have an extremely negative impact on a neighborhood street. How can constructing a five-story garage next door to a home, duplex, apartment or condo building not have anything but an adverse impact?

The construction of a five-story parking garage on a densely populated residential street, such as South Ogden Drive, represents a predatory commercial intrusion into the neighborhood. LACMA has ample space on their existing campus or their Spaulding lot to construct a subterranean parking facility to accommodate all of their parking needs.

If LACMA wants to redevelop Lots 75 and 76, they should build what is permitted: multi-family residential. The close proximity to the new subway portal – scheduled to open in 2023 – makes this an ideal location for affordable housing.

Since the Wilshire Community Plan Update in 2001 over a thousand new housing units have been added to the Miracle Mile thanks to the [Q] Conditions placed on our surface parking lots. The [Q] Conditions have been a smashing success. The City of Los Angeles must not allow LACMA to displace additional housing by granting exemptions to allow for the construction of a parking garage.

The residents of the Miracle Mile will not stand idle while a five-story garage is plunked down in the midst of one of our residential streets. Whether on environmental issues, zoning regulations, or just plain common sense, the Ogden garage must not be built.

(James O’Sullivan is a long-time community activist and the President of the Miracle Mile Residential Association. Ken Hixon is Vice President of the MMRA. And Greg Goldin is the co-author of “Never Built Los Angeles,” and “Never Built New York,” and is currently working on an exhibition at the Museum of the City of New York on the history of Central Park. From 2000 to 2012 he was the architecture critic at Los Angeles Magazine.) Prepped for CityWatch by Linda Abrams.