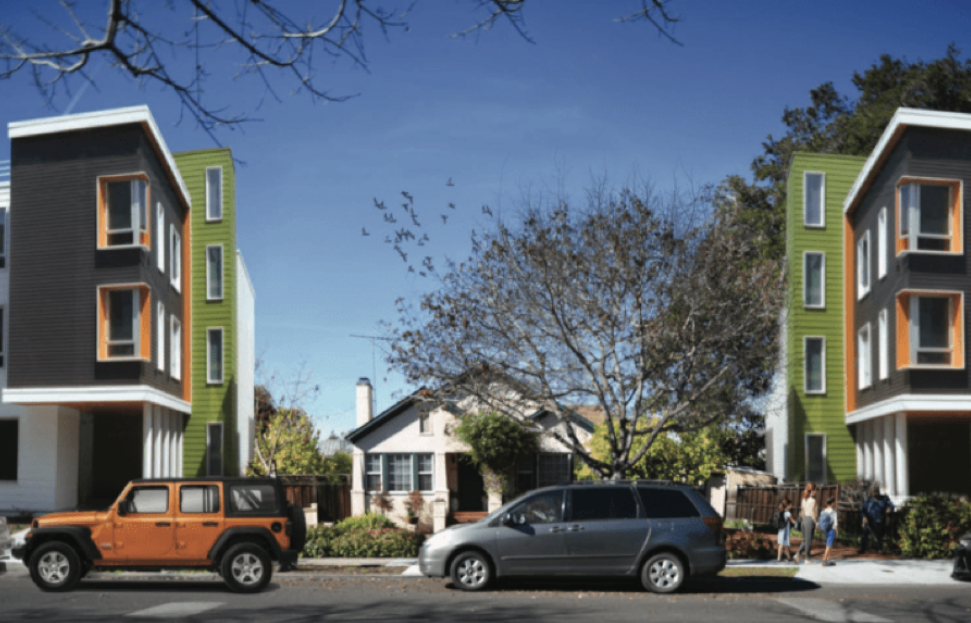 The legislation is complex, even though its essence is clear. If adopted, it would accelerate the construction of tall, dense, luxury rental apartments throughout the entire State of California, including Los Angeles. It puts Wall Street into your Backyard (WIMBY), whether you live in an apartment or a house, by exempting most local land use decisions from zoning, planning, and environmental laws.

These are the grisly section-by-section details of the bill’s most recent amendments.

Senate Bill 50 would impose state-mandated upzoning on all California cities, with higher requirements for parcels in proximity to transit, jobs, and some schools. As recently amended, SB 50 also requires a minimum density of four units per parcel in these areas. This provision effectively prohibits single-family and duplex zoning. The only exceptions are:

SB 50 “protects” some rental housing for seven years, when low-income tenants no longer live in it, and for 15 years, following Ellis Act evictions. But, there are no existing state or municipal offices that sufficiently track tenancies and/or Ellis Act evictions for this provision to be implemented. Furthermore, SB 50 does not establish or fund any municipal agencies to unearth, record, analyze, apply, and share these data.  In Los Angeles, for example, there are no databases that identify existing rental apartments and the income level of tenants.

As for the tenants themselves, few have the knowledge, time, money, and resources for a multi-year fight to stop SB 50 apartments. 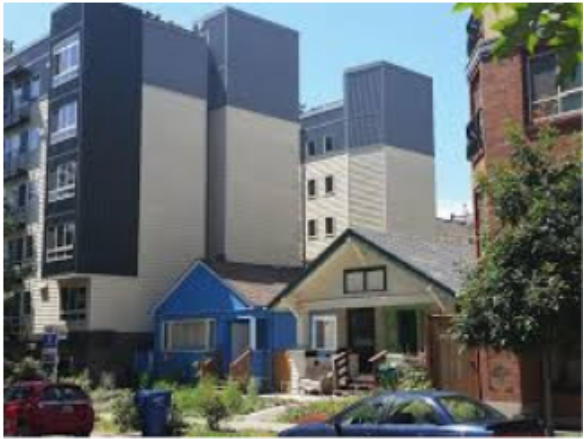 The new SB 50 amendments would exempt contributing structures, as long as their historic district was established by 2010. Nevertheless, SB 50 would impact all historical districts and HPOZs since they contain non-contributing structures. These districts could, therefore, experience new, over-height, dense, multifamily structures next to single-family homes. As for LA’s four Residential Floor Area Districts (RFA’s) and its many anti-mansionization R1 variation zones, SB 50 would supersede their zoning provisions regulating height, size, and density. Other existing zoning requirements, such as open space, parking, and yards, could also be jettisoned through density bonuses waivers stacked on to SB 50 projects.

Even contributing structures in HPOZs adopted in 2010 or later would be subject to upzoning under SB 50, as amended. In Los Angeles this includes these post-2010 HPOZs: Carthay Square, El Sereno-Berkshire, Hollywood Grove, Jefferson Park, Miracle Mile, Oxford Square, and Sunset Square. The following HPOZs adopted in 2010 might also be impacted: Balboa Highlands, Country Club Park, Highland Park-Garvanza, and Windsor Village.

SB 50 also excludes non-HPOZ historical landmarks, monuments, or buildings registered at the state or national level. So, for example, the Los Angeles Times building, with its new City of Los Angeles historical designation, would lose protection. This is also the case for recently designated historical structures in the Wilshire Vista, Miracle Mile, and Carthay Square neighborhoods.

SB 50, as recently amended, divides California into larger population counties, like Los Angeles County, (more than 600,000 inhabitants) and smaller population counties (less than 600,000 inhabitants), nearly all in northern California. Regardless of population, all counties would be subject to the fourplex minimum upzoning requirement, as well as imposed up-zones on all parcels close to transit and/or in "jobs rich areas."

WHO GETS UPZONED BEYOND THE MINIMUM FOURPLEX LEVEL?

"Transit rich parcels" – every parcel in a large county that is within a 1/2-mile from rail or ferry and/or a 1/2-mile from a "high quality" bus stop (i.e., buses in each direction during peak hours scheduled for intervals of 10 minutes or less) will be upzoned, regardless of real time bus performance. As for parcels that are "rental free for seven years", SB 50 states that nearby bus stops must have been scheduled for ten-minute headways during the preceding five years, although there is no evidence that cities and local transit agencies maintain such data.

An area identified by the Department of Housing and Community Development (HCD), in consultation with the Office of Planning and Research (OPR), that both meets “high opportunity” and “jobs-rich,” (criteria) based on whether, in a regional analysis, the tract meets (a) and (b) below.

a) The tract is “higher opportunity” and its characteristics are associated with positive educational and economic outcomes of all income levels residing in the tract.

This vague definition of “jobs-rich” could become whatever HCD wants. How will HCD and the Governors Office of Planning and Research measure existing and potential commute levels and distances? Will the State of California and local California cities suddenly establish accurate databases documenting where previous and current residents work(ed)? Can Sacramento define and measure “positive educational and economic outcomes” for local residents in all of California’s cities?

Without adding the requirement and funding to create sophisticated monitoring units that would collect, maintain, and share this information in every city, SB 50’s jobs-rich provisions are not enforceable.

WHAT IS THE MAXIMUM LOCAL UPZONING THAT SB 50 IMPOSES ON CALIFORNIA CITIES, SUCH AS LOS ANGELES?

The 15 larger counties, for both job and transit-proximity private parcels:

The 43 smaller counties, regardless of proximity to rail or jobs.

HOW MUCH LOW-INCOME HOUSING WILL SB 50 REQUIRE?

SB 50 projects of up to 10 units: none. This is in contrast to LA’s two existing density bonus ordinances: SB 1818 and TOC Guidelines. Their threshold for the inclusion of low-income units is five or more apartments in a building.

SB 50 projects of 11-20 units can pay an "in lieu" fee to a nearby affordable housing construction site, with the amount of this fee and payment mechanisms to be worked out.

SB projects of between 20 to 350 units. Current state law provides a 20% - 35% density bonus for three levels of low-income: Moderate, Low, and Very Low.  SB 50 lifts the 20-35% density bonus to infinity and shrinks the affordable housing requirement by renaming the three levels: Low, Very Low, and Extremely Low. This shift in nomenclature allows SB 50 to amend existing density bonus laws.  It gives unlimited, valuable, and unappealable entitlements to real estate investors, while taking away most of the affordable housing requirements that were previously the trade-offs for receiving density bonuses.

All local density bonus requirements for low income housing in excess of the miserly percentages set forth in SB 50 are round-filed. They are replaced by SB 50’s imposed and unappealable upzoning, including its division of California into 15 larger and 43 smaller counties. 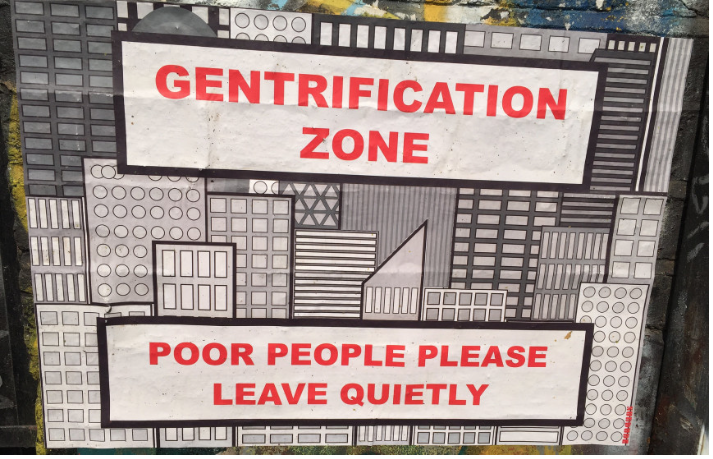 Finally, SB 50 "punts" back to local authorities the risks of gentrification and displacement.  It allows them to delay the implementation of SB 50 in "sensitive communities" by updating local Community Plans, but only according to SB 50’s conditions.

Sensitive communities would be identified by the State’s Housing Department every five years, based on two criteria:

If you thread this needle, what do you get? The answer is the right of cities to update Community Plans for “sensitive communities,” as long as these updated plans adhere to SB 50’s multifamily housing densities. Furthermore, if a city does not jump through this hoop by 2025, then SB 50’s higher densities will automatically replace existing zoning ordinances.

While the City of Los Angeles could update the local Community Plan for a state-identified “sensitive community,” only one outcome is allowed. The zoning that implements an updated Community Plan must match the higher densities required by SB 50. If a local community has failing infrastructure and public services, design guidelines, stagnant population, high residential vacancy rates, and/or an abundance of new housing near bus stops and subways, tough luck. These local planning conditions are irrelevant to SB 50’s imposed up-zoning requirements. In effect, SB 50 voids state and local charter requirements that California cities, like Los Angeles, prepare, adopt, implement, and monitor their General Plans.

Hopefully, this summary and analysis of SB 50, as recently amended, will help CityWatch readers understand the devastating effects of this legislation on Los Angeles and nearby cities.  As additional amendments are ironed out through behind-the-scene deals in Sacramento, we will assess them through future CityWatch articles. In the meantime, please contact your local representatives in the California State Senate and Assembly to share your criticisms of the draft legislation.

(Dick Platkin is a former Los Angeles city planner who reports on local planning controversies for CityWatchLA. He is on the board of United Neighborhoods for Los Angeles and can be reached at [email protected]. Hydee Feldstein’s analysis of recent amendments to SB 50 was extensively used to prepare this article.) Prepped for CityWatch by Linda Abrams.