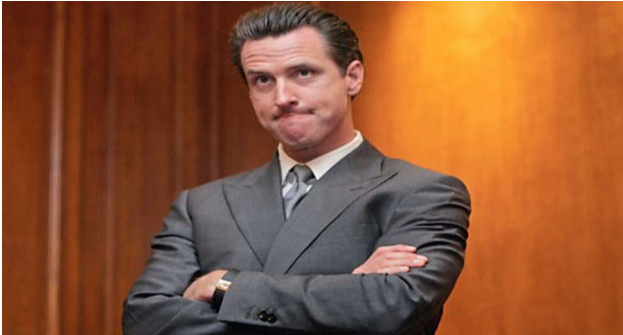 EASTSIDER-I like Gavin Newsom. Even though I initially supported John Chiang, it was pretty clear that Gavin was the best/most likely to succeed candidate in the pack. Lack of name recognition in Southern California aside.

I wrote a CityWatch article back in September of 2017 when Newsom came to the East Area Progressive Democrats meeting, where he was (and is) impressive:

“What I was surprised to learn during the evening is that he is also perfectly happy to dig down beyond the political platitudes we use for contentious issues and talk about facts, figures, and budgets.”

He just may be the answer to the question I posed in September of last year, as to whether anyone could control the out-of-control CalPERS Board.

The CalPERS Board Structure

First, a brief recap as to the Board structure of CalPERS. As I wrote back in 2016 In Defense of the 800 Pound Gorilla of the Public Pension World:

4 members are ‘ex officio’, a fancy way of saying that they automatically have a seat by virtue of their public office. Those officials are the State Treasurer, State Personnel Board designee, Director of Human Resources for the State, and the State Controller. In the case of these officials, the actual person sitting on the CalPERS Board is usually one of a number of designated staff members, and they can rotate.

2 members are appointed by the Governor. One Represents the Insurance Industry, and the other represents local government.

1 ‘public’ member is appointed jointly by the Assembly & Senate of the State.”

Unfortunately for you and me, the Board has largely abdicated its fiduciary duty to the beneficiaries and its oath, and essentially has acted as a rubber stamp for the Executive Director and Staff of CalPERS. The Chair of the Board has unfettered power, and runs the agency in conjunction with the CEO, even to the extent of censoring other Board members’ mail and access to information. How this all works is described in an earlier post called Can Anyone Control Out of Control CalPERS?

The takeaway from that article is clear:

“Unfortunately, the current Board President, Priya Mathur, believes in truly Trumpian levels of secrecy and hiding what should be publicly available documents from us, the beneficiaries. She also tried to cover up Charles Asubonten’s mess, presided over the $3.4 million settlement with Dow Jones over blatant copyright infringement, and put her finger on the scale of the recent CalPERS Board elections. What a Prez.”

As also referenced in the same article, add in the hiring of a totally out of her depth CEO called Marcie Frost, and it is clear that neither the beneficiaries nor the public are being well served by how CalPERS is being run. And until recently, without much pushback from the Board.

And even as Mathur departed after losing an election, the replacement President is none other than Henry Jones, whose financial background consisted of being the CFO for the Los Angeles Unified School District. That’s right, the LAUSD which has consistently flunked anything to do with fiscal math. He has fought to become Board Chair since back in the days of Feckner, and I guess now he got his wish.

First, there have already been some changes on the Board itself. When JJ Jelincic, the lone ranger in a “go along to get along” Board, announced his retirement, it was likely that there would be no voice of reasoned opposition on the Board. And JJ’s replacement, David Miller, indeed met the challenge. No questions asked there.

Fortunately, for the other open seat, insurgent Margaret Brown defeated the incumbent Michael Bilbery, who had never cast a vote against the machine (or asked a question). Then, in a stunning victory, Jason Perez unseated CalPERS Board President Priya Mathur. Perez, a police officer, made it clear he believes in change.

The Board (unsuccessfully) went after Margaret Brown hammer and tong. Newly elected President Priya Mathur, who never voted against staff in her life, quickly reprimanded Brown, and followed up by locking her out of her CalPERS office! You can read the dirty here.

Mathur, unsurprisingly, was a major cheerleader in the questionable hiring of CEO Marcie Frost. Then, in one of those only in real life moments, a virtually unknown Corona peace officer, Jason Perez, unseated Mathur in last year’s election. Perez took office in January 2019.

More changes for the good seem to be in the air. During the gubernatorial transition from Brown to Newsom, Brown removed Richard Costigan as his appointee to the California State Personnel Board.  In a recent article I had characterized him as Richard Costigan - Exemplar of What’s Wrong with the CalPERS Board.

The takeaway on Costigan was:

“So, to me Mr. Costigan represents the abuse of power, to the benefit of Mr. Costigan and to the detriment of us, the beneficiaries. Costigan should quietly be asked to resign from his SPB seat (these are gubernatorial appointments, and, by definition, serve at the pleasure of the governor) and should definitely not be reappointed to any future term on the SPB.”

A lot of people, including me, contacted the Governor’s office regarding this matter, and miracle of miracles, Governor Brown removed Costigan from office, and replaced him with Mona Pasquil Rogers, the governor’s appointments secretary. While the State Personnel Board will have to vote to affirm her designation to the CalPERS Board, Costigan is gone. Wow! Kudo’s to everyone who wrote or called.

In another seismic move, Brown moved Richard Gillihan, a CalPERS Board member by dint of being the Director of Human Resources for the state, over to the Department of Finance. Gillihan, a total shill to the CalPERS staff (and almost their CFO), is replaced by Adria Jenkins-Jones. Interestingly, Jenkins-Jones was recently the point person in overseeing how the civil service selection process works for Cal HR, as the Human Resources Department is named.

So, we now have two independent-minded Board members, Brown and Perez, along with new faces who may well be interested in governance and oversight -- Mona Pasquil Rogers and Adria Jenkins-Jones. But wait, there’s more. There are potentially two more changes which could occur this year.

First, the governor’s local government appointee is Bill Slaton. However, Slaton’s last term at SMUD’s board has ended, which means he remains on the CalPERS Board only unless and until Governor Newsom appoints someone else. Someone else, I hope, who is less tied into the increasingly untenable status quo of CalPERS. For a scathing critique of Slaton’s idea of oversight, check out this article in NakedCapitalism:

“Nevertheless, Bill Slaton deserves special attention. He is a self-appointed enforcer on behalf of staff, regularly shutting down the sort of give and take you see at better-functioning boards, such as CalSTRS. He is also an aggressive and ignorant defender of private equity. If you want a personification of Dunning Kruger effect at CalPERS, you need look no further.”

Second, if my math is correct, Henry Jones, who is the current President of the Board after Mathur’s demise, has a term which expires January 2020. That would mean that there will be an election in 2019 to fill his retiree position. Gee, if I remember right, one JJ Jelincic is now a retiree. Wouldn’t it just be groovy if we could persuade JJ to run against Jones? Hmm.

Seriously, I wish Governor Newsom the best. He promises to be a breath of fresh air in a State that needs it and is free to chart his own course. I believe that he has the breadth of knowledge and will to straighten out the governance of CalPERS.

With the significant financial and political troubles at CalPERS, it and its unfunded liability has a direct impact on the entire State. Wouldn’t it be neat if the 800 Pound Gorilla of the Pension World could move in a positive direction?