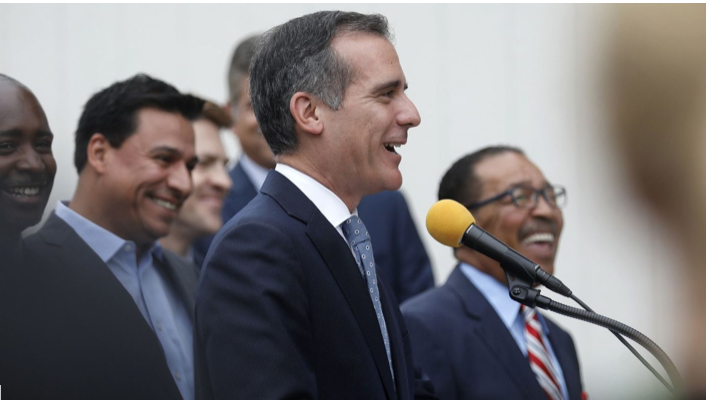 RANTZ & RAVEZ-2019 is finally here and we begin the new year with lots of emerging situations including a new Governor with an interesting political history, an expanding FBI investigation into suspected corruption at Los Angeles City Hall, a teachers’ strike at the LAUSD and lots of rain and snow and traffic collisions on LA roadways.

I will begin with politics. We have a new Governor. Congratulations to The Honorable Gavin Christopher Newsom, a man who has been successfully re-inventing himself and has become a rising star in California Democratic politics, even with a checkered past. Governor Newsom, who was once engaged in a romantic relationship with a friend’s wife, rose up the political ladder in recent years to a variety of high political positions in Northern California. Of significant note, was his election as Mayor of San Francisco where, under his leadership, the homeless population became a permanent fixture in that once great, tourist-friendly city It has been a few years since I visited San Francisco, and that was on a Harley ride. The streets of San Francisco and motorcycle tires don’t make a good match. In fact, between the trolley tracks and hills, it’s real danger to ride a motorcycle or drive a stick shift car in the city by the bay.

While serving as Mayor, Newsom saw the homeless population continue to grow and become more of a problem for business owners, residents and tourists. They have not only taken to living on many San Francisco streets, as they do in Los Angeles and many other communities around California, but they have also turned the sidewalks into their personal restrooms where they openly relieve themselves. One of the consequences of homeless people having a lack of access to hygiene outbreaks of Hepatitis as well as other illness associated with the homeless lifestyle in San Francisco.

The “Poop Patrol” had to be established due to the wide-spread “deposits” of human feces on sidewalks and in other public areas. The city now employs crews that are paid an annual salary of $71,760 plus benefits of $112,918 (which brings their compensation package to a total of $184,000) to clean up sidewalks and public walkways. Not a bad salary for doing the “stink” job.

Governor Newsom has inherited a fortune in the state budget. Governor Jerry Brown left $21.5 billion when he termed out of office. This is in addition to the $15.3 billion set aside in the Rainy-Day Fund.  Governor Newsom has introduced a budget for next fiscal year of $209 billion. The big question is, what will he do with the Bullet Train to nowhere at a cost of $77 billion and the $17 billion Delta Twin Water Tunnels? Time will tell the future of these costly projects.

Governor Newsom’s public safety record is rather weak. He supported Prop 62 in 2016 that relaxed the death penalty. In addition, the Governor supported Prop 47 that reduced the consequences for a variety of crimes. With the State Legislature and Senate both controlled by Democrats, the Governor has a green light to move forward with new taxes and many other programs that will cost us more money in taxes and fees. There is already talk of establishing a new water tax for residential use. Keep your eyes open and tuck your wallet away.

When the FBI comes calling with search warrants, you can expect trouble is brewing at LA City Hall

The FBI and I.R.S. have been investigating possible corruption at Los Angeles City Hall over a period of time. In early November a search warrant was served on Los Angeles City Councilman Jose Huizar.

A search of his City Hall office was conducted as well as his residence. Items were removed by agents for further review. As the investigation continues, more names and places are popping up with possible ties to corruption at City Hall. Since this investigation is continuing and federal authorities are never in a rush to close a case, we will see more stories on this matter generated in the future.

From what I have found to date, the inquiry centers on large downtown developments and the involvement of City Hall officials in those developments. Much more to come on this matter as the case continues and more information is made public.

In Los Angeles, the Los Angeles Unified School District is experiencing a teacher’s strike. The first in 30 years. The teachers walked off the job after the district could not meet the union’s demands. This includes reasonable demands like smaller class sizes, full-time nurses at schools, additional support staff and improved salaries along with other conditions. The 6% salary increase was not sweet enough to entice the teachers to approve the contract and continue on the job. The union and district officials have been in negotiations for over 20 months. Talk about dragging your feet! The Los Angeles County Board of Supervisors is currently working on a possible $10 million-dollar program for school nurses and mental health services at LAUSD schools.

When I think about the vacant and abandoned LAUSD schools in the West Valley, I see how the school district is run and often mismanaged by layers of ineffective and wasteful management and bureaucracy.

Since the previous contract expired in June 2017, a three-year deal will only be effective for 18 months. Only time will tell how this matter turns out.

Rain and rain and more rain with beautiful snow-capped mountains…

The ground is flush with water and the continuing days of rain have caused many problems in many areas of Southern California that suffered recent fire damage. They say when it rains it pours and Mother Nature does as she pleases. With beautiful snow-capped mountains and watered gardens, we should enjoy the beauty of nature as it carries us into the New Year.

If you have a question or concern, I invite you to email me at Zman8910@aol.com.