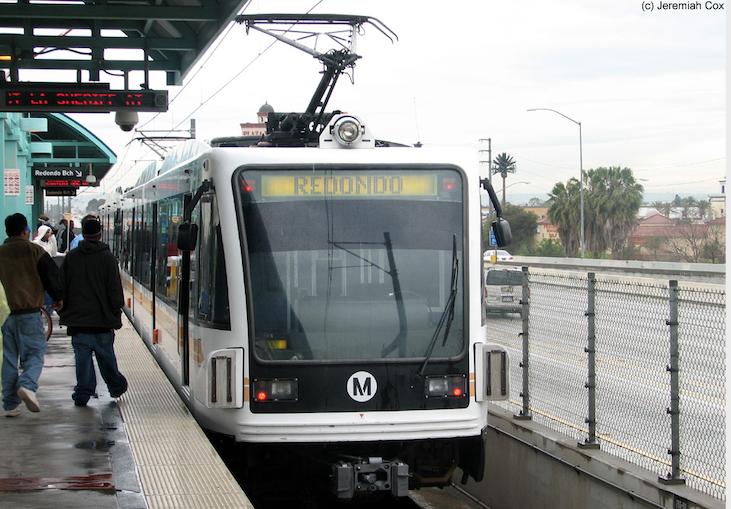 ALPERN AT LARGE--Those of us who've watched, who've advocated for, and who've critiqued the Green Line for years have noted its potential and its shortcomings.

Built decades before otherwise planned for construction as part of the I-105 freeway mitigation process, it has the potential to connect to the Westside, South Bay, Southeast LA Cities, and, of course ... LAX!

Carrying over 30,000 riders a day, the Green Line light rail that approaches but doesn't connect with all those geographies is still one of the fastest and most heavily-ridden light rails in the nation. This fact either confirms the success of this light rail line, and/or the deficiencies of light rail in general...take your pick.

However, the ideologues who just, hate, hate, HATE motorists really need to rethink who's paying their wages, and probably a few of them need to be downright FIRED.

1) Considering that most of us at community meetings (from the Westside to the Eastside, from the north to the south, commuters and taxpayers are both fair-minded, patient, and reasonable) are BOTH screaming for more light rail AND for more car/parking considerations, the desire for far-flung motorists who want to use MetroRail similar to Metrolink should be respected.

Suggesting that we can't afford lots of parking is one thing, advocating for funding and policy to create it (private/public partnerships are fine) is another...and pretty much giving the middle finger to those complaining about parking (who are still pro-transit, mind you) is yet another.

2)  Security issues remain, and it's still to be considered that if Metro Board and staff members don't use Metro 2-3 days a week at least then there will continue to be a disconnect between those who use the trains, who want to use the trains, and those who plan and make policy for the trains.

It's also to be considered that women with young children should get a larger say as to safety/security policies, because Metro is NOT a place to shelter the homeless. Metro should stay OUT of the "what to do about the homeless" problems because self-respecting women (and men) with other options will sadly just not use Metro like they do in most other U.S. cities.

Clearly Mayor Garcetti and others on the Metro Board with their grinning, happy, well-funded faces asking loudly, "Isn't this GREAT?!" are out of touch with their taxpayer and voting base (the money train won't work forever...and for those of us who started and fought for that money train, you might want to listen, Metro).

But for now, the Green Line ridership is steady, and its potential remains strong.

The short-term compromises are worth the long-term gains, but compromise in amenities and safety/security won't cut it forever with kind, generous and patient taxpayer/commuter groups forever.